During the first years of the German Democratic Republic, the leading members of the Socialist Unity Party took homes in Pankow, in a crescent of villas close to the Panke river and the palace at Niederschönhausen. After 1953, when Soviet tanks rolled onto the streets of East Berlin to quell an uprising of the workers, and the 1956 Hungarian Revolution, which ended in much the same way, those head honchos, including Walter Ulbricht, Erich Mielke and Erich Honecker, decided things were not secure enough even in the leafy Berlin suburbs. Five years after Brecht had written his Buckow Elegies as a response to the events of 1953, the leadership – unable to dissolve the people / And elect another – moved north, to a fortified compound in the woods, just outside the town of Wandlitz.

They remained there until the Berlin Wall came down in 1989 and the eleven-month transition that followed, resulting in German reunification on the 3rd October 1990. Not long after the Wall came down, at the end of November 1989, the first journalists were admitted into what had become known as Volvograd, after the Swedish cars the Politbüro members drove along their special motorway between Wandlitz and East Berlin. Although the myth and rumour of the GDR had created an impression of the leaders of the GDR living in unimaginable luxury in the Waldsiedlung (‘Forest Settlement’), the reality of life in the compound was, like so much in the GDR, a little more banal.

Yes, they had access to goods that for ordinary citizens could only be purchased with western currency at the Intershops, and yes each member and their family had a free-standing, comfortable house. There was a social space – a club – at the heart of the compound, with gym and swimming pool and restaurant, but in many ways, what was shown in those first documentary films from Wandlitz was a gilded prison. In a state that had built a Wall to keep its citizens in, the leaders of the GDR – the representatives of the people – had built high walls to protect themselves from the very workers and peasants that professed to represent. Within the compound, they lived under constant observation, paranoid by threats from outside and the manoeuvrings from within. Far from being simply a symbol of the privileges of the ruling Party class, it was not a place many of the leadership lived happily, as Frederick Taylor in his book The Berlin Wall explains:

The settlement sometimes seemed like a kind of leafy political reservation. Every night the system gathered its rulers in, as if to leave them wandering outside might be dangerous, both for them and for the people at large. Despite the luxury of life there compared with elsewhere in the GDR, few if any of the elite seem to have lived there out of preference or desire. Many of the settlement dwellers confessed later to a distinct sense of claustrophobia.

On an autumn day we drove out to Wandlitz, parking a short walk from the forest settlement. The compound, both the inner sanctum reserved for the leadership and the outer section where the service personnel worked and lived, are now part of a clinic. There have been buildings added, and gardens landscaped for the patients, but as you walk you still can get a sense for how it was back when it was Volvograd. The guard house is still there, as is the club and each of the individual residences, and information boards have been erected outside the houses of some of the more notorious members of the Politbüro.

We walked, beneath the gloomy pine trees, and it was easy to imagine how that sense of claustrophobia developed. Surrounded by tall trees, barely letting the summer light in; your neighbours nosiness over the back fence not only annoying, but likely to end up in a special file at Mielke’s office in Lichtenberg; too scared to spend too much time down at the club with one particular colleague, in case the two of you were accused of political intrigues…

The perimeter wall that kept the bossmen in and the proles out is crumbling now, and we followed a track along its length until a large enough hole gave us access once more to the outside world. From here we crossed the main road and followed a track through the trees until we reached the Liepnitzsee. This lake is reputedly one of the cleanest in Brandenburg, and a popular day trip for Berliners in the summer (a kind of Kollwitzplatz in the woods). Back in GDR times, the Liepnitzsee was where the Soviet ambassador had his summer residence – another good reason for building the Waldsiedlung nearby – but now the entire embankment path, apart from a stretch around the marshes at the eastern end, is open to all.

We walked along mushy, leaf-carpeted paths, sharing it with many other autumn strollers, trail runners and Nordic Walkers with their oversized poles. Although it was possible to look out, through the trees and across the water, we were still covered by the canopy and mostly surrounded by tree trunks. And yet here, a few kilometres from the Waldsiedlung, the Brandenburg forest no longer felt oppressive. The sense of claustrophobia had lifted. Which just goes to show, once again, that how we feel about a place is so often shaped by what we know happened there.

We drive north along the autobahn to the Liepnitzsee today with a sense of excitement of escaping the city, in search of fresh air and – if the weather is warm enough – cooling waters. Back in the GDR, those grey men in suits sat on the back seat of their Volvos and headed back along that same autobahn to the compound in the woods. There were many walls in the GDR. Along borders. In people’s heads. And in the forest. 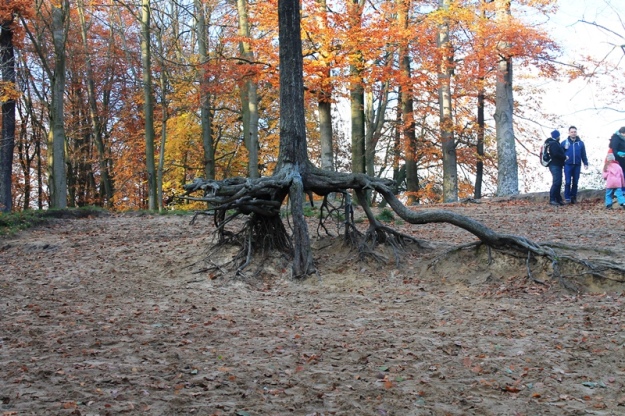 The Brecht poem about the 1953 Uprising is called Die Lösung / The Solution
Quote from Frederick Taylor’s The Berlin Wall, published by Bloomsbury (2006: 109-10)