We drove up the Vršič pass, that high mountain road built by Russian POWs during the First World War that crosses the Julian Alps and links the Soča and Sava river valleys of Slovenia. The road consists of a series of seemingly endless hairpin bends, back and forth, passing the Russian Chapel built in memory of those POWs killed by an avalanche during the construction of the road. Up we drove, this time beneath blue skies, the walls of the high peaks rising up above the autumnal colours of the trees that lined the road. I had that flutter in the belly, the sense of excitement that comes with arriving in a mountainous landscape. The anticipation of the walk ahead. Imagining the views from the top and how it would feel. The possibilities of what was to come.

“The remoteness of the mountain world – its harshness and its beauties – can provide us with a valuable perspective down on to the most familiar and best charted regions of our lives.”
– Robert Macfarlane, Mountains of the Mind

I have lived for fifteen years in Berlin. Fifteen years in a place where the highest hill within a three hour drive stands at little more than 120 metres above sea level and which was once a rubbish tip. Fifteen years in one of the world’s great cities, with a surrounding countryside of lakes and forests that has its own appeal – one I have learned to appreciate – and yet a long way from anything approaching a mountain. The landscapes of Brandenburg, however depopulated they have become, remain clearly and without question shaped by human hands.

The mountains offer us something different; something that you can only find in those places – when confronted with the ocean, perhaps, or the vast expanses of the desert or the steppe – where it feels like you are facing an environment that is beyond anyone’s control. These places, Macfarlane writes, do something to our brain, as they “stretch out the individual mind and compress it simultaneously: they make it aware of its own immeasurable acreage and reach and, at the same time, of its own smallness.”

We had come to the top of the Vršič pass in order to experience this, in whatever small way, and a landscape very different to the one we had left behind at home.

The walk we had planned was a modest one. From the top of the pass, at roughly 1600m to the peak of Slemenova špica, 300 metres higher and yet regarded as one of the finest walks in the area because of its position, surrounded by higher, rugged peaks of the northern Julian Alps and with a view in the opposite direction back down towards Kranjska Gora and the valley floor. We would be able to see across to Italy, over to Austria.

The path rose steeply from the top of the pass, through pine groves and across precipitous scree fields. Soon the only man-made structure in our sight was the path itself, snaking its way up to the Vratica saddle which was our access point to the high, hanging Sleme Valley and the route up to the top of Slemenova špica. From Vratica we could see down either side of the ridge of higher peaks to the west, get a sense of the different weather conditions on the north and south faces of these mountains, and the impact that had on the rocks and the plants that clung to them.

The path now followed along a cliff edge. Down below, far below, we could see the rooftops of Kranjska Gora. Above, the peak of Slemenova špica was now in view, and a couple of figures moved on the summit. Soon we reached the high pasture that stands just beneath that summit, a grassy glade dotted with mountain pools. It is hard to imagine a more spectacular picnic spot in this corner of the Alps, with views across to the peaks of Mangart (2679m) and Jalavec (2645m), and as we took a short break to catch our breath a chattering of Alpine choughs came to visit, hoping for the scraps of sandwiches at a place where, our guidebook informed us, “on holidays you can find half of Slovenia enjoying the view”.

Today we shared the glade and the peak with the choughs and a handful of other walkers, trading greetings in German, English, Italian and Slovene to reflect the geography of this mountain top. An Austrian woman told us, as her partner took our obligatory summit photograph, that the day before they had climbed Mangart and been able to see down to the Adriatic. We were just happy with the views we had here and all that landscape – those mountains and hills and forests and rivers – that had unfurled before us with each step we had climbed up the pass. What we all shared was a sense of well-being; of being in this place, with these views, on this day and at this time.

Later, after retracing our steps to the car and then the descent into the valley at Kranjska Gora, we stopped by a lake where there was a view, back up to where the river descended from its source in the high hills, and we could see the summit of Slemenova špica silhouetted by the sun. We were just up there, a few hours ago, and from this perspective it seemed hard to imagine. But we had the memories of that moment when the landscape opened out, when we at once felt small and insignificant and yet the expanse of world offered up to us had space within it for any flight of fancy or act of imagination.

The possibilities of the mountain. Sometimes you get this moment at the coast, as the flat expanse of the sea opens out, ready to be filled by whatever memories or stories you conjure up at that moment. And other times you find it in the hills, after the long walk to the top. 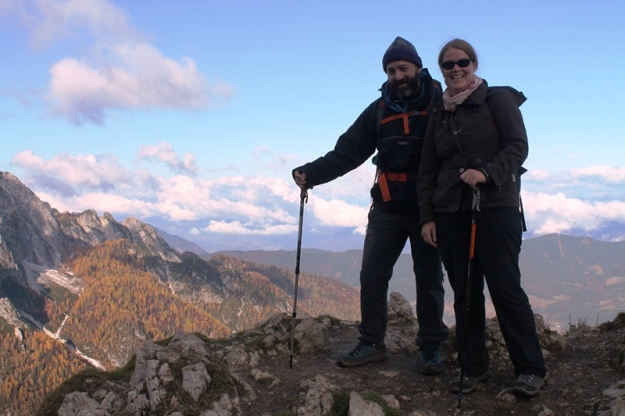 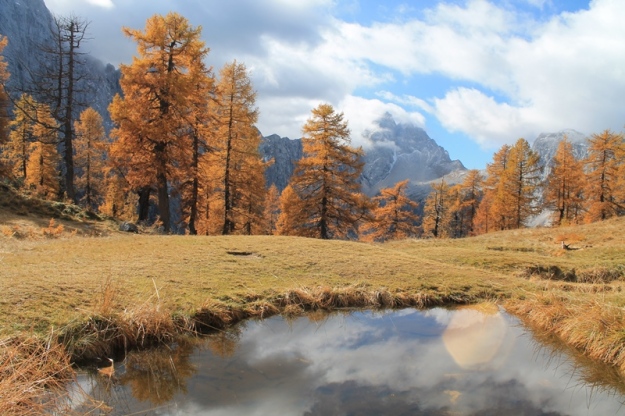 Notes: Robert Macfarlane, Mountains of the Mind, published in 2003 by Granta Books

1 thought on “The walk to the top and the possibilities of the mountain: Slemenova špica, Slovenia”