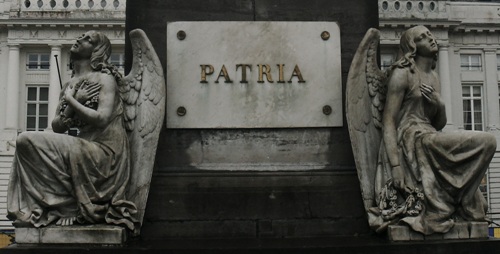 I cross the square, and the damp sand squeaks beneath my feet. Wet from rain, it seams the cobbles of the pavements, sifts into the gutters and drains. The sand smells of gunmetal and earth, with a scent of the sea, as though tides once lapped these ancient squares. It is a reminder of our proximity to water, the shifting base of rivers on which we build our monuments to progress.

Here, sand is like the innards of the city; its hidden viscera, its soft core beneath a carapace of buildings and roads. I pass a construction site where a vacant plot is being excavated for development, and I see a vast hole in the ground, foundations for a new building, which is layered with stacks of yellow and ochre sand, like the glass lighthouse-shaped paperweights I remember from beach holidays of my youth, filled with striped layers of coloured sediment, like a history of geological time. As the construction deepens, older and older layers are exposed, each one a slightly different colour to the last, each one telling a story of water, holding a memory of currents gently teasing the sand into ripples and banks.

This city in which I walk, like so many in mainland Europe, is built on the sand and gravel of a river plain. Foundations reach far below ground; houses have deep cellars which drip moisture from the pores of the sand. Rivers flow and shift beneath the surface, memories of braided channels which once ran open and wild amongst forests of alder and beech. It makes for easy construction: cellars and sewers are dug quickly and without obstruction; the metro system could be tunnelled with so little effort. But sand is porous; the water comes back if left for long enough; damp seeps into the layers like a stain across a cloth.

In early November 1889, an experienced merchant marine captain called Józef Teodor Konrad Korzeniowski presented himself for interview at the offices of the Société Anonyme Belge pour le Commerce du Haut-Congo in Rue de Bréderode. His appointment was with Albert Thys, the Director of the Society, and a principal architect in the colonial rule of the Congo basin and surrounding lands; a colony seventy-seven times the size of the mother country. Korzeniowski was applying to become the captain of one of the riverboats which connected the interior of the country with its coastal ports. A Pole by birth, he had worked on French and British ships, and had settled in England in recent years, if ‘settled’ is the right expression for one whose life is spent at sea.

We can only assume the interview went well. In May of the following year, Korzeniowski left Bordeaux for the Congo. At Boma, he took command of a tall, ungainly riverboat which carried people and goods between the coast and the dark forested interior; guns and ammunition on the way up, rubber and ivory on the way down. Korzeniowski quickly realised that, in order to support a distant, vast colony, the National Government and its quasi-autonomous agents – l’Association Internationale pour l’Exploration et la Civilization en Afrique, the High-Congo Commercial Society, the national rubber company – were engaged in repression, murder and slavery. At the head of this shaky and shady pyramid was the king himself, King Leopold II, a man who seemed to regard the subjection of the Congo, and the winning of associated prestige for his tiny country, as his own personal quest.

Rue de Bréderode lies tucked behind the garden of Leopold’s Royal Palace, in a quarter of the city where all of the buildings are whitened with plaster and decorated with statues of classically draped Grecian women, each signifying some virtue which is seen as the essence of a civilised society: patience, wisdom, industry, commerce. A statue of Leopold, bearded and aloof astride an abnormally large horse, stands in the grassy square at the eastern end. I shift my view from the impassiveness of Leopold’s gaze to the cupola’d roofs of the Royal Palace, the arcaded halls of the buildings in the square beyond, and I am reminded of Korzeniowski’s description of his arrival in this city. By the time he wrote these words, in 1899, he had left the sea for good, settled in England permanently and adopted the anglicised name of Joseph Conrad. The book in which he fictionalised his experiences in the Congo he named Heart of Darkness, and the chastening experience of his entry into the elegant façade of Belgian hegemony he put into the mouth of the narrator of his novel, the sea captain Marlow:

“In a very few hours I arrived in a city that always makes me think of a whited sepulcher. … I had no difficulty in finding the Company’s offices. It was the biggest thing in the town, and everybody I met was full of it. They were going to run an over-sea empire, and make no end of coin by trade”

I cross the park on my way into town. The paths are whitened sand, pressed flat beneath the passage of feet, coated in a damp ochre powder from recent rains. The park stands on a brow overlooking the city, surrounded by stucco’d nineteenth century buildings which date mostly from the time of Leopold II. They are museums and conference halls, art galleries and military schools. They were designed as a piece; a new town of elegance and culture, inspired by the King himself. In the 1880s and 1890s, the country became very, very rich, and invested heavily in the development of prestige and grandeur, the building of monuments to progress and prosperity. It was a wealth, as Conrad knew, built on a trade in bones.

Later, I sit in a bar and watch the city mill around me. The large windows look out on a sky which is already, at this time I the year, darkening to evening. The bar is called Le Roi des Belges; it is the name of the riverboat which Conrad captained up the Congo river in the summer of 1890.

The square outside the window is filling with people, stopping on the way home from work, out early for the evening. It is a popular quarter in the evening, shifting from depression and poverty to subtle gentrification, the brick buildings scrubbed and re-pointed, the pavements filling with chairs from cafés and restaurants. It is the old canal quarter, formerly thick with warehouses and wharves, the canals now partly infilled and paved into squares and boulevards. Beneath the surface, the yellow sand settles and re-forms, no longer disturbed by the digging of canals and the passage of boats. I see sand on the pavement and I imagine it seamed beneath the whole city, the churches and hotels, the law courts and banks, the elegant arcades, all resting on an unstable base of yellow sand which, at certain times, is seen to be stained red in the fading light of the setting sun.

About the Author: Ian grew up in Lincolnshire, but has lived in Cumbria for 20 years.  His writing, which he says focuses on ’Landscape and Memory’,  has previously appeared in Earthlines magazine, in the anthology Dark Mountain 3, and in The Language of Footprints, an e-book showcasing new writers in the North-West. He was the recipient of a Hunter Davies Bursary for new writers in Cumbria in 2012. A selection of his work is also on his blog at www.printedland.blogspot.com