The town of Cloughjordan, Co. Tipperary, is what can be described as a typical rural one-street Irish town in the ancient province of Munster.  It straddles the invisible county border of North Tipperary and Co. Offaly and is situated only several kilometres away from what was the centre of the world for about an hour almost exactly one year ago when a man named Obama came to drink Guinness and tread the footsteps of his ancestors.   Shortly before he embarked on that Irish-American vote clocking journey to Moneygall I embarked on a similar one to Cloughjordan to view the land of my forefathers.   Armed with a camera and a quest for my own personal history I embarked on the 714 mile round trip from Belfast, which inexplicably took me through Limerick, to the small town of Cloughjordan.   Disembarking from the train with slightly less fanfare than the ‘leader of the free world’ I walked a further kilometre to reach the town and on that pleasant spring day it was easy to see why its most famous inhabitant, the poet and revolutionary Thomas MacDonagh, once described it as a place ‘in calm of middle country’.

The town is of Norman origins and was settled during the Norman conquests of Ireland in the 13th century.  It supposedly received its name from a Norman knight with the surname De Marisco who fought in the Crusades.   He was said to have brought back a stone from the banks of the River Jordan for use in the building of his castle.  It was this stone which the town’s name derived from, Cloch Shiurdáin – The Stone of Jordan, ‘Cloch’ being the Gaelic for stone.   Long after the Normans were by and large absorbed into Irish culture the area was resettled in the Cromwellian plantations of the mid 17th century.   Colonel John Harrison was granted a large estate in recognition for his role in the conquest and built his stately home on the site of the former Norman castle, it is known today as Cloughjordan house, and it was my destination for the night.  Incidentally it was during this Cromwellian period that the Sheppard family came to be in Ireland.  An apparent ancestor of mine, Captain Thomas Sheppard, was granted over 1,400 acres in the barony of Slievardagh and Compsey County Tipperary in 1666 for his part in the conquest of Ireland.  His descendants established the stately home of Castlesheppard upon the townland of the same name a short distance north of Cloughjordan. 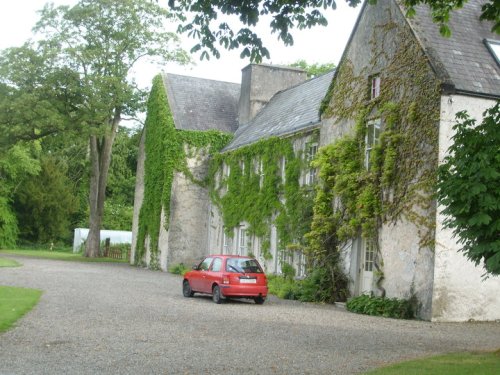 On the walk into town I passed by several houses of worship, as I always do, with lightening speed.  St. Michael and John’s Catholic Church; St. Kieran’s Church of Ireland and the local Methodist Church… with a population of 431 at the last census count in 2002, it appears I may have stumbled upon the most pious village in Ireland.  I was reliably informed that in the past the town had been known as ‘Little Belfast’ due to the religious divisions of the population.   So pronounced was this religious divide that the current Catholic Church was only built in the town in the late 1890s in the face of apathy and opposition from some inhabitants.   Funds for the new Church were raised from the Irish Diaspora in America and England as well as a special draw in which the prize was ‘a small farm near the town’, which ended up in the possession of my grandfather’s older brother James.

The town’s most famous son, Thomas MacDonagh, a published poet and Gaelic League activist, is best known as a signatory of the Proclamation of the Provisional Government of Ireland and a leader of the 1916 Easter Rising rebellion in Dublin.  After the put down of the rising MacDonagh was imprisoned with the other leaders in Dublin’s Kilmainham Gaol and sentenced to death on 3rd May 1916.  This uprising was the catalyst for the ensuing War of Independence 1919-1921 which led to the signing of the Anglo-Irish Treaty of December 1921 which guaranteed 26 of the 32 counties of Ireland semi-independence and Dominion status within the British Empire.   MacDonagh was born the son of two teachers on the main street of the town in a modest house nearby the local school and a few doors up from where my great grandfather lived and had the family tailoring business.  The fiftieth anniversary of the rising in 1966 was commemorated with various remembrance events throughout Ireland and in Cloughjordan it was marked with a library being built on what were the grounds of the old school where MacDonagh’s parents taught.  The building was dedicated to the memory of Thomas MacDonagh.  The local GAA hurling team Kilruane MacDonaghs also bear this famous family name as a tribute. 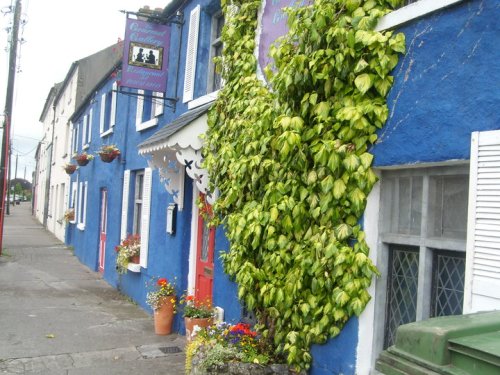 (above: my Great grandfather’s house)

If Cloughjordan produced one of the catalysts for a ‘green revolution’ in the early 20th Century, it can now be argued it has produced the catalyst for a much needed green revolution of a different kind in the early 21st Century.   Cloughjordan’s ‘Eco Village’ is Ireland’s leading green community initiative and was conceived at the turn of this century.   In 2005 land was procured within the town for 130 environmentally friendly homes and work units and construction on the homes began in March 2009 with residents beginning to move in by that year’s end.   In 2011, 17,000 trees were planted in what is termed as ‘community woodland’ and an Eco-Hostel established.  A central part of the Eco Village project is Cloughjordan Community Farm, which is open to people living within the Eco Village area as well as the older town.  The Eco-Hostel produces a range of tours, presentations, discussions and hands on learning experiences holds classes on topics such as green building, renewable energy and organic food growing as well as the establishment of an organic bakery.

My short trip to my grandfather’s home town brought me more than I had first anticipated.  From the beginning it was a fascinating journey on a personal level, to retrace the footsteps of ancestors long since gone and to have a tangible link to a town which produced such a famous historical figure as well as having direct connections to pivotal eras in Ireland’s modern and not so modern history.  It was also an inspiring visit due to the potential of the town’s green future through a fairly unique community based project. 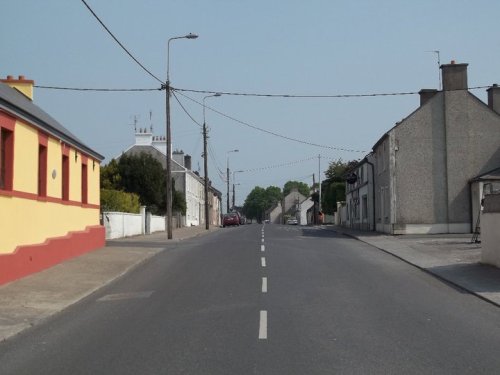 2 thoughts on “Green revolutions in Cloughjordan”