Almost thirty years ago, when I was still a child, my Grandfather attempted to teach me Theodor Fontane’s poem Herr von Ribbeck auf Ribbeck in his original tongue – Plattdeutsch, a dialect of German from the north of Germany – as I spent my summer holidays with him in the countryside. I did not understand the poem then, and try as I might I was unable to memorise it. That was the summer before my grandfather died.

Years later I remembered his wish for me to know this particular poem, and knowing that he had died soon after, and having finally come to understanding the story, I always felt as if he had been trying to tell me something… that in some way he wanted to leave something behind in a different way than the Herr von Ribbeck:

Squire von Ribbeck at Ribbeck in Havelland,
In his garden there stood a pear tree grand,
And when autumn came round, the golden tide,
And pears were glowing far and wide,
Squire von Ribbeck, when noon rang out, would first
Fill both his pockets full to burst.
And then, when a boy in his clogs came there,
He called: ”My lad, do you want a pear?”
He would hail a girl that chanced to pass:
“Come over, I have a pear, little lass!”

Many years thus went, till the noble and high
Squire von Ribbeck at Ribbeck came to die.
He felt his end. It was autumntide.
Again pears were smiling far and wide.
“I depart now this life” von Ribbeck said.
I wish that a pear in my grave be laid”.
And after three days, from this mansard roofed hall,
Squire von Ribbeck was carried out, `neath a pall.
All farmers  and cottagers, solemm-faced,
Sang: ”Jesus, in Thee my trust is placed”,
And the children lamented, with hearts like lead:
“Who`ll give us a pear, now that he is dead.?”
So the children lamented. It was unkind,

As they did not know old Ribbeck´s mind.
True, the new one is skimping niggardly,
Keeps park and pears tree `neath lock and key;
But having forebodings, the older one,
And full of distrust for his proper son,
Knew well what he did, when the order he gave,
That a pear should be laid in his grave.

From the silent dwelling, after three years,
The tip of a pear tree seedling appears.
And year after year, the seasons go round,
Long since a pear tree is shading the mound.

And in the golden autumntide
Again it  is glowing far and wide.
When a boy is crossing the churchyard there,
The tree is whispering: Want a pear?”
And when a girl chances to pass,
It whispers: “Come here for a pear, little lass.”

Thus blessings still dispensses the hand
Of  von Ribbeck at Ribbeck in Havelland.

Earlier this year, when discussing a place to visit with my closest friends, and having seen an article about the small town of Ribbeck, it seemed clear that this place was where we should go. And so we rode our bikes from Nauen to Ribbeck, the location for the poem that meant so much for my Grandfather. It was a day to remember our grandparents and our past, to tell each other stories and, not least, to eat cake… and it was a day to create some new memories of our own. 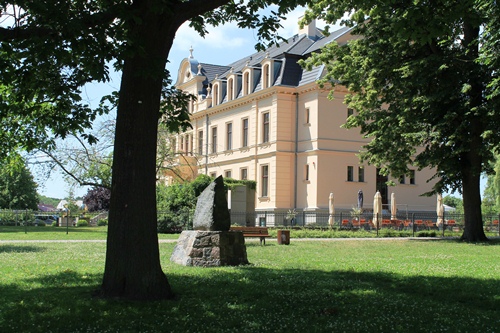 The source for the English translation of the poem “Herr von Ribbeck auf Ribbeck” by Theodor Fontane is the website vonribbeck.de where you will also find it in a number of different languages.

1 thought on “The Squire of Ribbeck, Havelland, Germany”