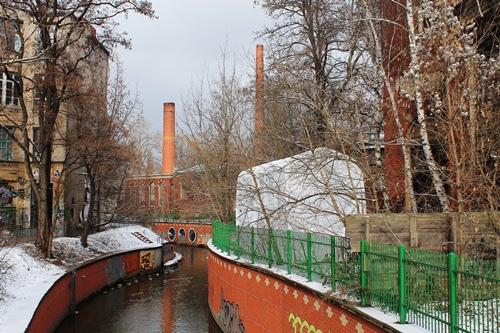 Since we moved to the neighbourhood of Wedding* at the end of 2010 we have enjoyed exploring and getting to know a new corner of the city. Not long after we moved, I wrote about my experiences and first impressions for Slow Travel Berlin, and even then I was quite taken by this corner of the city that has a pretty poor reputation in the city and yet has not only a fascinating history, but is also home to a number of really interesting grassroots cultural, artistic and community projects that reflect the diversity and also the “neighbourhood pride” in an area where the population is mixed between those with long-established roots here and those of us who are in the 35% who were born in another country – the highest percentage of foreign-born residents anywhere in Berlin.

Through Slow Travel Berlin I am putting together a “slow walk” through the city that will be eventually available to travellers and interested Berliners through the Tours & Services page of the website, and so on Saturday Katrin, Lotte and I walked through the streets for a few hours to plan the route, search out some things I had read about, and to stumble across some fascinating things that we had not even known were there. I don’t want to give too much away – you’ll have to come on the tour – but once again I was struck by the stories of this old working class district that was once called “Red Wedding” because it was a stronghold of the Communist and Social Democrat parties in the 1920s and 1930s and, indeed, was one of the only quarters of the city not to vote for the Nazis.

Our walk took us along the Panke River – which I have written about here and elsewhere before – past an old spa that became a theatre and is now a library, abandoned factories and a swimming pool-turned-cultural centre, modern pharmaceutical plants and modernist concrete car parks, lots of churches and graveyards, a brewery in the basement of a tower block and a couple of markets, railway lines and hidden courtyards, real Berlin corner pubs and Turkish private members clubs, and ended up with a stroll through the park and the views from the top of the old Flak Tower at Humboldthain.  It snowed, and our neighbourhood has never looked more beautiful. The tour is going to be a lot of fun. 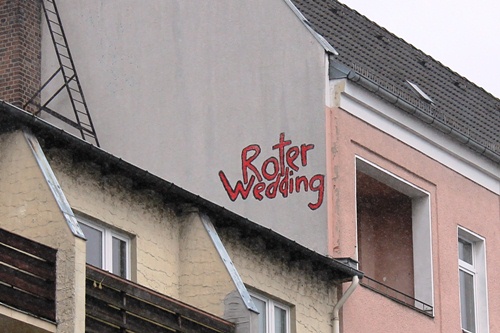 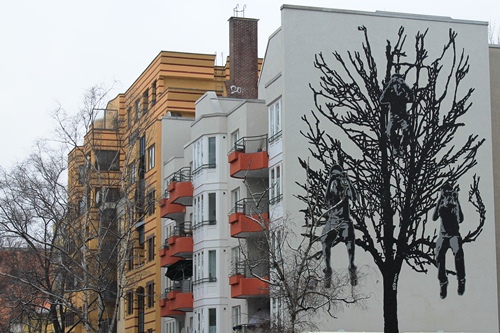 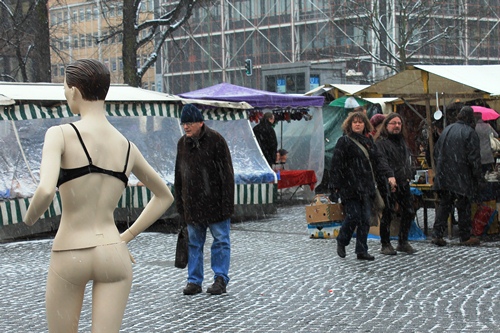 *For Berliners: our apartment is on the Osloer Straße, which is actually in Gesundbrunnen. Gesundbrunnen is the eastern half of the historic district of Wedding (1920-2001), whilst the western half kept the traditional name after the division. This split in 2001 was part of a wider reorganisation of Berlin’s district boundaries, which saw both Wedding and Gesundbrunnen subsumed by the new super-district of Mitte, which combined Wedding, Tiergarten and the historic Mitte itself. Phew. But for good or ill, and in the page of the wonderful Der Wedding magazine, when people speak of “Wedding”, they are usually talking about both halves together, as if the split never happened.

6 thoughts on “Outside the front door – A walk through Wedding, Berlin”