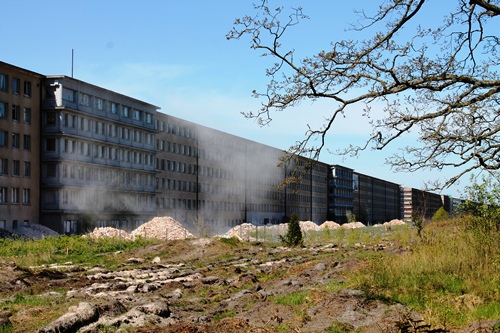 I first visited Prora, just up the coast from the seaside town of Binz, back in 2006. As we pulled into the car park on that November day, surrounded by tall pine trees, it did not seem up to much. There was a ramshackle building topped with a sign advertising “Rügen’s Largest Nightclub”, a building beyond the trees that was under renovation – it would open a year later as a youth hostel – and otherwise not much else beyond an eerie sense of abandonment.

The building clad in scaffolding was just part of an enormous complex that had been conceived of by the Nazis in the 1930s as the first of five massive resorts that would be run under the organization Kraft durch Freude (Strength through Joy). Prora was to house 20,000 holidaymakers at a time, sleeping in one of eight buildings each half a kilometre long that were to be laid out along the Prora Wiek, arguably Germany’s finest beach.

Everything about Prora was supposed to be big. Each of the eight accommodation blocks would have a restaurant capable of serving 2,500 diners at a time, and there would be cinemas, ballrooms, and a landing stage for the Kraft durch Freude cruise ships that would take in the sights of the Baltic Sea and beyond. It would have its own train station, swimming pools and an open air Festplatz. There would be so many people staying there at once that even bathing in the sea was planned, with half the guests allowed to access the beach at any one time, like sittings in a restaurant.

These were to be cheap holidays for the people, and a sop to workers who had found their trades union shut down and neutralised as the Nazis tightened their grip on Germany. But the ultimate aim of these mega-resorts, indeed of the KdF organization in general, was intrinsically linked to the military and political goals of National Socialism. The head of the KdF, Robert Levy, was under no illusions:

“Everything we do… all, all of it only serves this one aim to make people strong, so that we can solve this most urgent problem… that we do not have enough land.”

Construction began in 1937 but by 1939, with war declared, priorities shifted and with Prora unfinished resources earmarked for the resort were allocated elsewhere. After the war the  building work that had begun was completed and the accommodation blocks were used by the East German Army. It became the place the conscientious objectors of the GDR were sent. There was a little-known law in East Germany that allowed young men to opt out of compulsory military service. Instead they could chose an alternative, which found them sent north to Rügen, to Prora, where they were utilised as “construction soldiers.”

With the fall of the Berlin Wall and the reunification of Germany, Prora had once again lost its purpose, and the debate raged about what was to be done with the symbol of both Nazism and Communism that occupied some of the finest coastal real estate in the country. Matters were complicated in 1994 when the existing buildings were given landmark protection, meaning the obvious option – knock it all down and start again – was no longer available. When I first visited, the five standing accommodation blocks (of the eight originally planned) had been sold off but were in varying states of repair. One, as mentioned was to become a youth hostel. Others housed artist studios, a documentation centre, a honey manufacturer and other quirky initiatives.

The real estate developers were biding their time – no doubt trying to work out exactly how to turn these massive structures with such questionable origins into a viable business plan. As you can see from the photographs accompanying this piece, they have begun the process, turning some of the buildings into a hotel and holiday apartments, to be sold as second homes to those looking for a seaview property and access to those beautiful sands. And here it gets even more interesting.

If you visit the website of the developers you will see wonderful artistic renderings and a film of how the 1930s building will be renovated to meet the needs of 21st Century second-home owners. Balconies will be added, there will be concierge services and a swimming pool. The lovely wooden houses of Binz are just a short walk away. And guess what? Because the building is landmark protected, you can write off up to 100% of the renovation costs in your tax declaration.

But despite the obvious benefits that the history of Prora brings directly to potential investors, there is no actual mention of whose idea this place was in the first place. Under the “history” section of the website, Prora is introduced as follows:

“The first idea came up probably in 1935. It was supposed to be a huge seaside resort for the common people. For this purpose, the most beautiful beach in Rügen was selected: Prora Wiek.”

Hmmm. And then, under the section on the architect, much is made of his winning the Grand Prix at the World Exhibition in 1937 without any mention of who commissioned Clemens Klotz in the first place. And then what happened? Oh yes, construction was “preliminarily terminated in 1939.” And why? It seems that when it comes to planning holiday apartments in 2014, the developers follow the maxims of Basil Fawlty; “Don’t mention the war.”

Don’t get me wrong. I think it is good that somehow people are finding a way to do something with the “Colossus of Rügen”. I especially like the idea of the youth hostel and campsite, as it seems fitting that young people from around the world are invited to enjoy a place that was designed for only a certain type of “volk.” I don’t even mind if the buildings are converted into hotels and holiday homes, if it guarantees the survival of the architecture which remains one of the largest examples of a “Nazi” structure and therefore has massive historical interest and value. I also understand that it is a difficult history, and it might not be easy when you are trying to sell a dream of balmy evenings and soft sands to start talking about Kraft durch Freude and the holiday plans of National Socialism, but strikes me that not mentioning the difficult elements of the past is not an answer either.

If you are ever on Rügen you should definitely go and check out Prora. Make sure you visit and support the Documentation Centre and their work in keeping the history of the site alive. My last visit was a few years ago, but the pictures for this piece come from Katrin Schönig’s exploration of the site in May 2014. 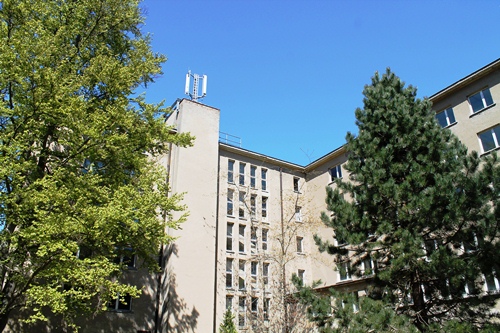 2 thoughts on “If you know your history… Prora, the Colossus of Rügen”