The choice of title of this piece has been chosen in homage to the inspiration for our explorations in the north of Berlin last weekend; the wonderful Strollology Berlin website that is devoted to “strolling through Berlin, collecting impressions of the city while moving around from A to B, as well as ‘strolling’ the internet in search of historical curiosities and images.” In a post last autumn, there was featured a slideshow of images from their “home neighbourhood” of Hermsdorf. The post intrigued me because, not only did their neighbourhood look leafy and green and well worth an explore, but also because up to that point I never even knew that Hermsdorf existed, and I was surprised to discover it was only about fifteen minutes away by S-Bahn.

It turns out that Hermsdorf is tucked up against the very edge of the city and the border with Brandenburg. Which means that, as Hermsdorf was part of West Berlin, the northern boundary of the neighbourhood was blocked off by the Berlin Wall. We did not make it that far on Saturday, instead climbing down from the S-Bahn and walking through quiet streets towards the old centre of the village (the “dorf” in Hermsdorf), stopping to explore the foundations of the former village church before following a narrow path down to the Tegeler Fließ, a stream that runs for 30km from outside Berlin (close to Wandlitz) to the lake at Tegel – hence the name. The stream itself was threatening to flow into some of the gardens as it appeared to have already broken its banks at various points, but the ducks seemed happy enough as they paddled in the shallows. By the time we reached the section where it opens out into the Hermsdorf lake the surface was frozen, contrasting nicely with the spring-time sunshine we were enjoying from above.

It all felt very peaceful and calm, although over the rooftops of the riverside houses it was possible to see the top floors of the tower blocks of the Märkisches Viertel, the West Berlin new town that hides Hermsdorf from the rest of the city and is often the chosen location for rap videos, perhaps as it is the closest Berlin can offer its hip-hoppers in the way of ghetto-aesthetic. We wandered down to Waidmannslust, where neat detached houses gave way to old industrial buildings, new box-like garden centres and supermarkets, and a real edge-of-the-city feeling. Waiting for the train I couldn’t help but marvel at the fact that Berlin can still throw up these surprises even after a decade or more of living here. I knew that once again it was time to spread out the city map, and have a look at which other corners of the city had escaped my notice and might be worth an excursion under grey skies or otherwise.

To round the whole story off nicely, three days later I got the chance to meet Anna from Strollology, and tell her how much I had enjoyed exploring Hermsdorf and that it had been her pictures that inspired the walk. I hope in return that she enjoys our take on her home neighbourhood… 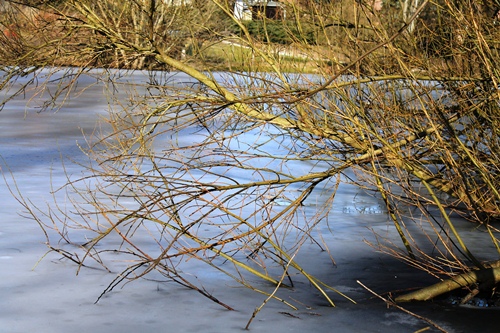 4 thoughts on “A Saturday stroll through Hermsdorf, Berlin”