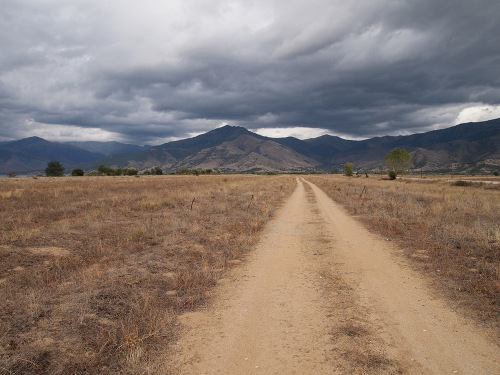 Julian Hoffman writes the wonderful blog Notes from Near and Far, and last week he celebrated the publication of his book, The Small Heart of Things:

The two Prespa Lakes are split by a flat isthmus, a spur of sand which pelicans glide across in summer as they swap one body of water for the other. Those two lakes, though, were once one, a single blue bowl encircled by steep slopes. Over thousands of years, silt and sediment from the mountains were sluiced down their gullies and creeks into the river that drains the valley. As the river emptied, spilling its mountain hoard into the lake – all the spoil of sand and silt that had been worn down by wind, rain and time – those tiny grains built up in a slow process of accumulation until they spread out across the water, building a bridge one particle at a time, turning one lake into two.

Those sandy levels are a favourite place of mine to walk, and at this time of year a marvellous spectacle unfolds across the flatlands. With the arrival of autumn, starlings begin gathering in large numbers, lining up like dominoes on the electricity wires slung along the road. I hear their chatter from a distance, the gossip of a gathered clan. The starlings tumble as I near, falling together to sheer away across the sky. The flock somehow stays together in these aerial dances, these murmurations of many wings, bending and turning as one, a dark and swaying figure, like they were simply a sheet being rippled by wind.

I’m delighted to announce that The Small Heart of Things was officially published last week, making its way in the world through the University of Georgia Press. While a book might appear to be a singular thing, in fact it more closely resembles those flocks of starlings, or the isthmus spanning the lakes; it’s composed of many pieces, a multitude of feathers and sand. The writings of authors such as Barry Lopez, Annie Dillard, Peter Matthiessen, Robert Macfarlane, Kathleen Jamie, Nan Shepherd and Giorgos Catsadorakis – amongst many others – have greatly influenced the thinking and language of the book with their elegant explorations of the world around us; the discussions with readers at Notes from Near and Far have helped clarify ideas or opened up paths in new and enriching directions; and the wonderful work of other writers, artists, bloggers and naturalists that I’ve been privileged to discover since starting the blog have expanded my sense of place immeasurably.

For more information on The Small Heart of Things, including where you can buy the book, please take a look at this page on Julian’s blog.

1 thought on “Sand, Starlings and The Small Heart of Things”