No, this post is not about the Botanic Gardens of Berlin, so wonderfully captured recently on the überlin blog. The reason for this post is somewhat more personal, as I caught the S-Bahn this morning from Bornholmer Straße south to Steglitz and the Botanischer Garten stop. This was my first neighbourhood in Berlin, back in the winter of 2001/2. Having moved to the city without a place to stay, one of my colleagues who was also studying at the Free University offered me a room in his apartment. The flat was on the ground floor, which made it a little dark – and happily cool when it came to the summer – but this was made up for by the fact that we had an overgrown garden out the back door that only Thomas and I had access to.

Altogether I lived down by Botanischer Garten for about nine months, before Thomas returned to Australia and I moved north, to Prenzlauer Berg, Mitte and, eventually, where we are now in Wedding. But I have very strong memories of that time, perhaps because it was my first months in the city. We would travel into the city on the S-Bahn, although if we were caught in town after the last train we would catch a night bus that took us on moonlight ride through deserted streets for over an hour, from Hackerscher Markt through Checkpoint Charlie to Kreuzberg and Schöneberg, before finally stopping in the shadow of the Rathaus tower in Steglitz. Sometimes, when Thomas had worked late and I was on an early shift, we would meet on the platform of the Botanischer Garten station, both of us bleary-eyed at opposite ends of our respective days.

Before I moved in with Thomas the Berlin I had known was that of the Rosa Luxemburg Platz and the north end of Mitte and Prenzlauer Berg. It was Alexanderplatz and Karl Marx Allee, the grand old buildings of Unter den Linden and the towering Plattenbau of Leipzigerstraße. I remember that Steglitz, only twenty minutes south on the S-Bahn, felt like another city altogether. Over time of course I realised that the distinctive character of many different neighbourhoods is part of the appealing nature of Berlin, and something I have talked about on here on Under a Grey Sky many times before, but back then I simply marveled at the difference between what I saw in the east and the west of the city, even though more than a decade had passed since the fall of the Berlin Wall.

Despite my interest in the history of the GDR in particular that had drawn me to Berlin in the first place, and the fact that the Berlin I initially fell in love with was the kilometre or so either side of the Schönhauser Allee in the old east, it was during those months in Steglitz that I also developed a soft spot for the old west. The shopping street of Schloßstraße reminded me of an English city centre. The U9 took me quickly up to Zoo and the West End, where everything felt much more like I the city I was reading about in Christopher Isherwood’s Goodbye to Berlin than it did around the Alexanderplatz. I mostly enjoyed the journey to and from work, even when works on the line resulted in a time-consuming diversion via the Ring-S-Bahn to catch the U8. This took me along the bottom of the Tempelhof airfield, as it still was, and I still have a very clear memory of that iconic old airport seen from an S-Bahn window in the early morning sunshine.

Walking around my old neighbourhood this morning I noticed some things that had changed in the ten years since I lived there – a “new” bakery, the fact that the Botansicher Garten station is locked up now, and you can only reach the platforms via the bridge,  and that my old kebab shop has moved to bigger premises across the street – but what is so striking, in this city where the debates around progress, changes, redevelopment and gentrification rage on and on, is how much that has stayed the same. I think this is what is appealing about many of the southern and western districts of Berlin, whether it is the area around Savignyplatz or the leafy streets of Lichterfelde, that there is a rootedness and a consistency to them; these are neighbourhoods that know and are happy with what they are. These are not the coolest, the most dynamic or the most vibrant corners of the city, but they manage, with their little squares and almost small-town feel to make this metropolis by the Spree feel that little bit more human… especially useful for the small town boy from West Lancashire. Sitting in that garden with Thomas as the sun came up one morning after a night in town waiting for the first S-Bahn to run, I can remember feeling happy to have landed there. It was nice to go back. 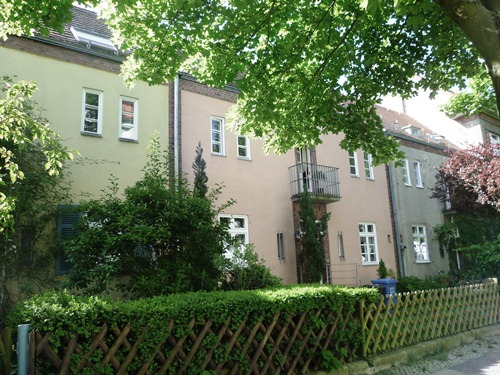