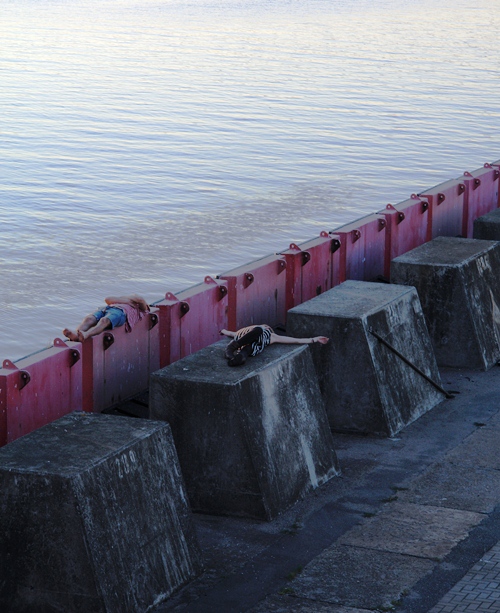 The following piece was inspired by the above photograph, taken at Rostock in northern Germany:

At the ferry port the vehicles line up in rows beneath the enormous floodlights that will make the scene as bright as daytime as soon as darkness falls. Families pile out of overloaded cars – playing cards and pillows, crumbled magazines and half-eaten biscuits, fall onto the tarmac as doors open – whilst lorry drivers lean patiently against open windows or watch films on laptops balanced on the dashboard. A coach driver bows to pressure from the back rows and releases the smokers with a pneumatic hiss of the doors, and the foot passengers and bike riders sit on wooden picnic tables lined up by the raised footbridge, next to a row of brilliant blue portaloos.

If travel is as much about the journey as the destination, and anticipation of what is to come heightens the experience when we finally get there, then waiting is part of the deal. Train stations, airports, ferry terminals and even service stations become the moments where the journey must pause, and we find ourselves killing time before we can get on the move again. Sometimes you hear these places – especially airports and service stations – described as neutral, or nowhere zones, because they are designed with a certain uniformity, or they do not necessarily reflect their surroundings. But ask any frequent flier about airports and they will tell you their favourites, the places they are happy to transit through and those which they avoid if they can possibly help it.

When I think back on past journeys it is often these points of departure, transit and arrival that I remember most. The chaos beneath the darkness at midnight in Casablanca, or the long lines of tired-looking South Indians waiting for admission to work on the enormous vanity projects of Dubai. I think of conversations at train stations, in Trieste and Verona, with close friends and others with whom the years have weakened the contact, and those two trips especially as formative journeys in which the train stations and the trains themselves often played as much of a role as the cities between which we were travelling.  I think of the ferry port in the north of Germany, the sun going down behind the cranes and the shipyards, and the excitement of young children as our boat approached through the harbour walls and they realised it was a matter of minutes now before they would finally be allowed to climb aboard.

In 2010 we watched Germany play Argentina outside a kiosk at Frankfurt Airport, waiting for a plane to South Africa, and it became one of my abiding memories of the tournament, as all kinds of people pulled up a plastic chair to watch the German team destroyed the dreams of Argentina as Diego Maradona had a breakdown on the touchline. The buzz around the airport even seemed to engulf the security guards, who made their checks with a smile on their face and conversations about the team’s chances in the semi-final against Spain.

And then there are the service stations – those refuelling stops on the road that are much-maligned for their expense, the weak coffee and limp sandwiches, where buying a road atlas (even though you have one at home) seems like a good idea, when compared to the collection of soft-porn magazines and greatest hits of Queen CDs that are the alternatives on offer. But even service stations can have their moments, such as the one high above the vineyards of the Moselle, where the picnic area seemed like a place to spend a while rather than a pit of existential despair, or a rest-stop in Sweden where it was possible to walk down to the banks of a lake and look out across the water, the roar of the traffic on the bridge above nothing more than a minor irritation.

Of course these points of arrival and transit and departure are all about the promise of what is to come, the excitement of the journey coupled with the anticipation of the destination. But sometimes they are a location and destination in their own right, the pause or the waiting in the journey the exact moment of reflection that will come back to you in future memories, long after other moments have faded. Earlier this year I passed through Verona station, over a decade since I said goodbye to my travelling companion of the previous couple of months. We shared quite some experiences on that trip, but it was the bench on the station forecourt where we saw each other last that is one of the clearest in my mind.