It was a strange time to travel to London. The attacks on London Bridge and Finsbury Park, and the desperate scenes from Grenfell Tower – let alone the stories that were emerging of how something like that could come to pass, let alone how the survivors were being treated – seemed to weigh heavy on the city as the temperatures soared to record levels. We had lots to do and lots of people to see, but there was one free morning. Over breakfast Katrin and I discussed our options.

‘I’d like to see this,’ I said, pointing at a picture of a mural on my phone. It was only a short walk away, down Brick Lane and under the railway. A place I had never been to but a name which resonated. Cable Street.

On the 4 October 1936, Oswald Mosley and his British Unionist of Fascists planned a march through the East End of London. That their route took them down Cable Street was no coincidence. This was a neighbourhood with a large Jewish population, and Mosley’s Blackshirts were marching to intimidate. The mural that now stands on Cable Street on the side of St George’s Town Hall shows what happened next: the combined forces of locals and anti-fascist demonstrators made up of Jewish, Irish, Communist, Anarchist and Trade Union groups among others, gathered on Cable Street to barricade the route and stop the Blackshirts passing through.

Altogether 20,000 protesters took to the streets, erecting blockades. There were about two thousand Blackshirts and about six thousand police on hand to force the march through. They were met by a bombardment of eggs, rotten fruit and the contents of chamber pots. The fascists scattered, leaving the police to battle with the protesters. There were injuries and arrests, but ultimately there was no way through. The British Union of Fascists had come, and the East End had told them in no uncertain terms what they thought of them.

They shall not pass.

As we looked up at the powerful mural, painted in the 1980s to commemorate what became known as the Battle of Cable Street, a woman on a mobility scooter approached us.

‘If they keep on like they are doing this’ll happen again. Only, they won’t be fighting the police, but the politicians.’

What followed was a meandering journey through recent British politics, in which she showed contempt for Theresa May and the Tories, the ‘Trotskyists’ in the Labour Party and the 27 non-British members of the European Union. The only authority figure she seemed to approve of was the Queen.

‘And they wanted us to get rid of the Queen. But we weren’t having that.’

She did not specify who ‘they’ were, but my guess it was the EU, and it was her explanation for the Leave vote. We chatted a little while longer as she cheerfully demolished anyone with any form of power in the country and beyond, while contradicting herself on at least three occasions. But it was instructive in that this single conversation reflected the distrust many feel about politics and politicians, and the real ability for change. In her mind there was an ‘us’ and a ‘them’. People vs power. All the while, as she talked, my gaze drifted up to the mural that stood above us. They shall not pass.

From austerity, she swung back to the EU.

With a shake of the hand and a nice smile she was off, trundling down the uneven pavement alongside Cable Street. At the end of her disjointed and at times ill-informed ramble through contemporary social and political reality, she had come to an important truth. There has been a disconnect. And in that space, mistrust and distortions of reality can flourish. But what the last twelve months have shown, after the shock of the Brexit decision, the tragedies of Manchester and London, and the remarkable General Election, is that perhaps people are finally waking up to what it is ‘they’ do, and how we all can put pressure on them to do it better. 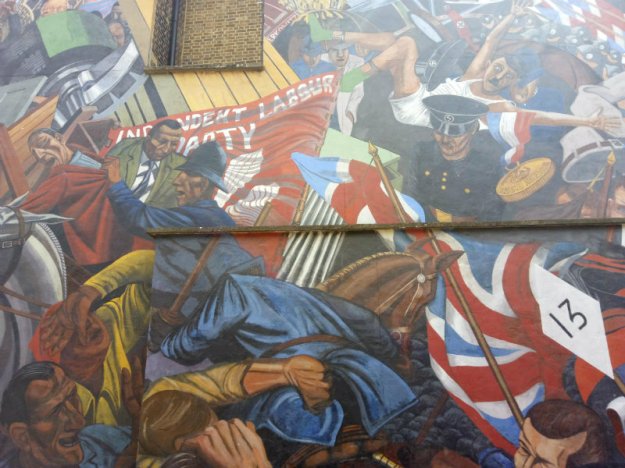 As I walked down Cable Street in the sunshine I felt hopeful. It was the power of the mural and the story of that day. When two thousand fascists with the protection of the police attempted to intimidate a neighbourhood and the response was strong, solid and clear. Afterwards, I spoke to a couple of friends, both of whom independently spoke of how the mural gave them a pride in their city that they didn’t always otherwise feel. I could understand that. I felt it too.

A few hours after our visit to the mural, back at our hotel and as I read the latest news online, things seemed less hopeful. For over a year now, it feels like my mood shifts by the day. In the course of writing this piece, even. But if there is one thing I took away from Cable Street, it was that we need to have hope. Even in the darkest moments.