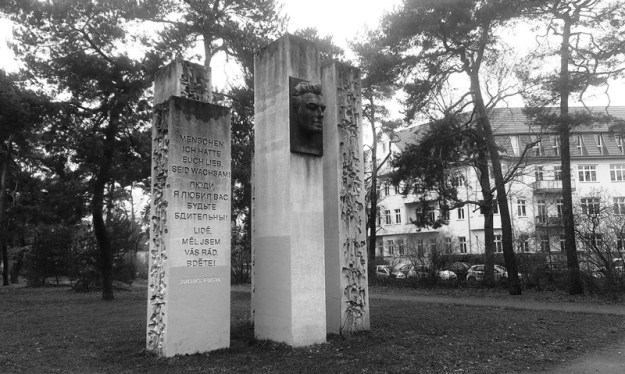 The park is deserted. I have walked here from home, a couple of kilometres along the Panke river from our apartment, past the garden colonies and old factories, past the football pitch and where the Berlin Wall once stood. It is a walk I have made many times, a corner of Berlin I have written about many times. More often than not we go this way in the summer, aiming for green open spaces of the park or the beer garden at its heart. We have celebrated birthdays here. Met friends. But on a weekday in December we have the park to ourselves.

The playground is empty, the swings gently rocking in the breeze as the sound of a plane coming in to land at Tegel fills the scene. The path by the river is muddy, churned by the bicycles of the school run or the journey to work. I look for the grey heron but he is not around today, just a handful of ducks on the embankment, heads buried in their own feathers. The bandstand is deserted. The beer garden too. A solitary runner enters at the far end, a flash of reflective orange from her jacket, but then she is lost to the path through the trees.

So when we meet Julius Fučík, in the furthest edge of the park from where we entered, we are once more alone. I have of course seen him before, looked at his face as he stares out towards Grabbeallee where the trams rumble south from Rosenthal towards the city centre. I have read the inscription, in German, Russian and Czech, that stands on the concrete pillar. And I have wondered about who this man was, remembered by the authorities in the GDR and given this corner of the park in Pankow, a few hundred metres from where the Politbüro once had their residences. Who are you?

I translate it, roughly. Mankind, I had loved you… be vigilant!

The memorial begs more questions than it answers.

Later, back at home, I am thinking about Julius Fučík, turning to the internet to try and find out more. The facts of his life are easily discovered. A journalist from Prague, Julius Fučík was a Communist responsible for the cultural activities of the Czechoslovak Communist Party at the end of the 1920s. This got him into enough trouble with the authorities and he was arrested a number of times but things would get worse once the Nazis had invaded and occupied Czechoslovakia in 1939. Moving between his parents house and the countryside he worked for the underground Communist Party before being captured by the Gestapo in 1942. His description of life, interrogation and torture in prison were smuggled out and eventually published after the war as Notes from the Gallows, although the full account of his time in the Prague prison would only be published in 1995.

In 1943 he was brought to Germany, accused of High Treason in Berlin, and sentenced to death. He was hanged at Plötzensee prison, not far from our apartment, in the district of Wedding that would become part of the French sector of the city after the Nazis were finally defeated. His memorial in East Berlin stood about as close to Plötzensee, in West Berlin, as the boundary and later the Berlin Wall would allow.

As I write these notes based on a couple of online biographies, I can see hints of a deeper story. More questions to answer, if I should keep digging. They surround his legacy, and of the debates around his support for Stalin. About the lives he saved after giving false information to his interrogators. About how he eventually succumbed to torture. Of why he did not use his guns when the Gestapo came to arrest him. About his status in Communist Czechoslovakia after the war and what that afforded his wife who survived him. About what happened to his reputation after the Velvet Revolution.

Clearly he has not been a contentious enough figure to have his statue in a Pankow park removed in the 25 years after the fall of the Berlin Wall and the collapse of communism across central and eastern Europe. And so he is still there, waiting for those who pass by on the path by the river, his story available to those who want to dig deeper, and a reminder that anything discovered on a walk on a cold and soggy day in December can be the start of a story. And next time we walk through the park, if anyone should ask me about the face in the concrete, if they should wonder aloud who Julius Fučík was, I will have at least some answers. It was nice to meet him.

Spent most of the week re-walking the Harz in my head and on the page with this fella, and then he turns up on my day off too... #heine #harzreise
Loading Comments...
Comment
×
<span>%d</span> bloggers like this: