A recent survey in Russia suggested that over two thirds of Russians want Lenin’s embalmed body removed from Red Square, at a time when the mausoleum is closed for renovation and speculation is rife as to what the future holds for the former Soviet leader. It is almost exactly five years since we stood on the cold expanse of cobblestones on a grey February day, and the mausoleum was closed for repairs that day as well, just a week before the election that saw Putin replaced as President by Medvedev. Putin is back in charge again, and he recently appears to have come down in favour of leaving Lenin exactly where he is.

Close by the entrance to the undulating cobblestoned expanse of Red Square is point zero, the marker from which all distances in relation to Moscow are measured. Here locals stand and toss a kopek or two over their shoulder for look, causing a scramble amongst the elderly beggars, whilst look-alikes of Lenin and Peter the Great share a cigarette and a chat between posing for tourist holiday snaps. As we walked through the archway five years ago, onto the square itself, it was one of the moments in travel when you are suddenly aware that this place that you are visiting for the first time has already established itself firmly in your consciousness, as a parade of images came to mind; Boney M music videos and military parades, Khrushchev banging his shoe belligerently on the table at the UN and Gorbachev booed, Stalin’s giant portraits in the Tretyakov Gallery, and the colourful onion domes that seem to provide the front cover for every guidebook and novel based in this city.

No matter how many times I had seen it elsewhere however, nothing could prepare me for the beauty of Red Square. Those domes of St Basil’s Cathedral were suitably exotic, reminding me that although Moscow may be one of Europe’s largest cities there is much about Russia that sets itself up as a place apart. The heavy red walls of the Kremlin run down one length of the square, combining with the squat Lenin Mausoleum that stands in front of it to provide a suitable atmosphere of reverence and authority to go alongside the religion. And from Orthodoxy to Communism to Capitalism, as across the square from the Kremlin the fairy lights of the GUM department store add the final piece of the jigsaw, where once queues formed for the most basic of household goods, now the covered walkways are flanked by the boutiques of the world’s designer labels, all protected from the Russian winter by a soaring glass roof.

We returned many times to Red Square, at different moments of the day, and there was something about this, one of the world’s greatest public spaces, that kept drawing us back. It did not matter that Lenin was unavailable to us, or that someone has taken the aesthetic-disaster of a decision to erect an ice rink in the heart of the square, nothing could completely erode the dramatic majesty of the place that proves that it is possible to visit the world’s most photographed sights and still have them exceed all expectations. 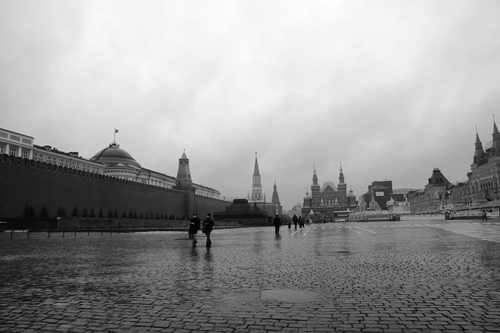