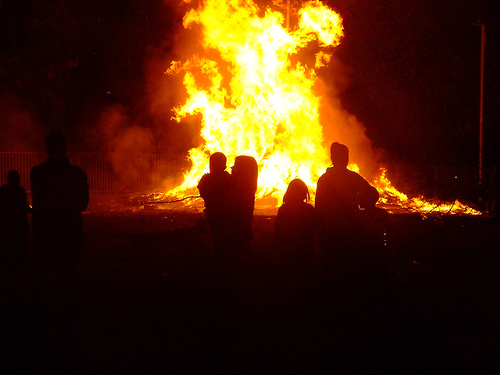 The German tourists on the bus laugh as the pack of feral dogs crosses the street at the airport roundabout. And why should they not? There are three dirty Jack Russell terriers and one lanky greyish-brown greyhound, an odd-looking combination for a modern day pack of hounds. The tourists do not know that the dogs hunt hares in the bushes and undergrowth around the business parks in Dublin 15, tearing them to pieces. The dogs leave shreds of paws and ears and bits of bone lying around the car parks for unsuspecting call centre workers. Dublin in autumn is a nice and gentle city only upon first glance.

Two days later, I take the local commuter train, the DART, from north Dublin to the city centre. Along the canals that the train passes and on the small squares next to the playgrounds in the estates kids in tracksuits and in grubby-white sneakers erect pyramids of wood; temporary pyramids to burn. They pile old wooden pallets, doors, window frames upon twigs, mouldy floor boards, plastic rubbish and the occasional refrigerator to form large heaps of tinder; offerings to the old Irish harvest gods and their own juvenile lust for destruction. One of the piles I see is crowned with a decapitated doll’s head on a wooden pole, its blue plastic eyes staring into nothingness.

Dublin is an old city in an ancient land, one of the few in Europe that the Romans never set foot on. Maybe that’s why I always subconsciously feel like the foothold of reason here is not as strong as in other places. While my other hometown Berlin comes with its own set of myths, these are somehow always related to recent historical events – Hitler’s bunker or a UFO under the TV tower. In Dublin, the supernatural seems closer than in the matter-of-fact capital of Germany. Maybe it’s  also the fact that Dublin was founded by the Vikings, who brought their hanging gods and blood eagles and Ragnarök with them and mixed it with the old Celtic deities that had never really left.

As opposed to Berlin, where New Years Eve is the main fireworks festivity of the year, in Dublin this is Halloween. New Years Eve in Dublin is a meagre visual and sonic affair mostly spent in pubs, but Halloween is when rockets are fired and children cheer bags of rubbish lighting up in bonfires. Its customs are influenced by folk customs and beliefs from the Celtic-speaking countries, some of which have pagan roots, and others which may be rooted in Celtic Christianity. It is typically linked to the Celtic festival of ‘Samhain’, which comes from the Old Irish for ‘summer’s end’. Samhain was the first and most important of the four quarter days in the medieval Gaelic calendar and was celebrated in Ireland, Scotland and the Isle of Man. It was held on or about 31 October and similar festivities were held at the same time by the Brittonic Celts in Wales, Cornwall and Brittany. Samhain is mentioned in some of the earliest Irish and Welsh literature. The name has been used by historians to refer to Celtic Halloween customs up until the 19th century, and is still the Gaelic name for Halloween.

Samhain marked the end of the harvest season and beginning of winter or the ‘darker half’ of the year. Like Beltane, its spring antipode it was seen as a liminal time, when the spirits or fairies could more easily come into the world. At Samhain, it was believed that the fairies needed to be propitiated to ensure that the people and their livestock survived the winter with offerings of food and drink, or portions of the crops. The souls of the dead were also said to revisit their homes. Places were set at the dinner table or by the fire to welcome them. The belief that the souls of the dead return home on one night or day of the year seems to have ancient origins and is found in many cultures throughout the world, and can be seen as the origin for why ghosts and monsters are still celebrated each Halloween. October 31 is also one of the busiest day of the year for the Emergency Services. Bangers and fireworks are illegal in the Republic of Ireland; however, they are commonly smuggled in from Northern Ireland where they are legal. It is also the one night when Dublin resembles other mainland metropoles that celebrate carnival, like Cologne or Nice: the streets are thronged with skeletons, slutty nurses, overgrown plastic tigers and policemen and the smell of vomit. 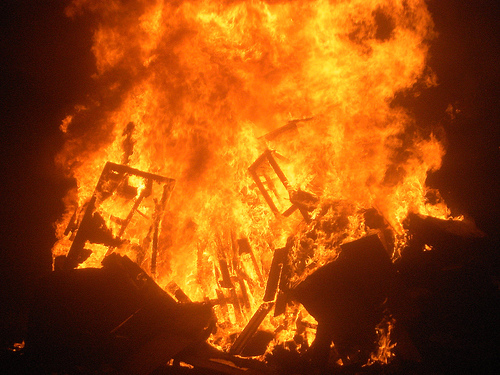 One day later, on All Hallow’s Day, I try to repent and walk off my hangover by walking through Malahide Demesne, where a maze of tracks and country lanes framed by overgrown hedges morph into a nicely laid-out 18th century park, some of its walkways completely disappearing under the dark canopy of the trees that have linked branches to form dark green and brown tunnels. I come upon a gnarled Hawthorn tree, decorated with toys and pictures and letters and plastic jewellery dangling from colourful woollen twines. Some of the items are childish and naïve: plastic figures and toys depicting elves and fairies with pointy ears and short pink dresses; others seem more sombre: black-and-white and colour photographs washed out by rain and sun, small handwritten prayers and mementos pinned to the tree with nails.

Wishing trees, or fairy trees or May bushes, are hawthorn trees where people tie ribbons to ask blessings from the fairies or local Catholic saints. The hawthorn usually flowers in May, the time of the Bealtaine festival of rebirth, and May bushes were usually associated with a holy well, but time has often dried up or filled in many of the wells. There is a tradition in Ireland that a single Hawthorn  growing in the middle of a field is a faerie tree as the Hawthorn was seen in Celtic mythology as a gateway to the otherworld, and like in equally fairy-believing Iceland in the past Irish roads have been built around fairy trees to avoid arousing the wrath of the invisible inhabitants and ensure wishes are still listened to. One of the alleged reasons that the Belfast-based DeLorean car company went bankrupt is the fact that a fairy tree was cut down while building their car plant. I walk over to Malahide station to take the train.

Then there is the Lady On The Rock. She’s not a fairy, and I imagine her to be something that could happen in Berlin as well. She’s a plaster statue of a woman reclining on a rock, with a piece of cloth covering her delicate areas and can be seen throughout town in the living room windows of the more traditional working class areas like the Liberties and Smithfield. She is a recent phenomenon, not linked to any ancient supernatural beings at all, but was introduced by a supplier of fireplaces and plasterworks located on Parnell Street on the north side of the city in 1993, and has been a bestselling item ever since. I see many statues reclining  as I walk towards O’Connell Street from Drumcondra to get the bus to the airport, some houses with two or three statues facing the street. There are many alleged reasons why the statue is there: she signifies that a house is a brothel; she is evidence that protection dues have been paid to a gang; she shows you where to buy heroin; she signifies that the homeowner has a child in prison. Whatever it is that attracts people to her, I’m not sure if it is really that important to find out.

Maybe that’s the difference between Dublin and Berlin and their myths: Berliners need to know that a myth is grounded in facts and reality, while Dubliners love a good tale, whatever the origin. And that’s why they’re still making bonfires for harvest gods once a year.

About the author: Marcel Krueger is a writer and blogger living in Berlin. His essays and stories have been published in the Daily Telegraph, Reykjavik Grapevine, Süddeutsche Zeitung and Spotted by Locals, amongst others. After six years in Ireland he currently tries to divide his time between Berlin, Cologne and Dublin. Together with Seamus Heaney, Roddy Doyle and a bunch of other great Irish writers Marcel also holds the world record for ‘Most Authors Reading Consecutively From Their Own Books’.You can find more uninteresting information on his personal blog King of Pain. He doesn’t like spiders.

Image Credits:  [1] Ballybrack Halloween by jmcarthy99, [2] Boherduff Bonfire by Nicola Corboy, [3] Fairy Tree by Chris Marquardt,
The copyright of all images belongs to the respective authors, and are used here under Creative Commons License. Follow the links to see the license details for each image.