On three occasions in the past month, leading a tour around my home neighbourhood of Wedding, we came across the gates of the old Crematorium in the heart of what was once the loud and dangerous industrial heart of northern Berlin and found them locked. Each time it was a disappointment, because a few months ago during the Berlinale International Film Festival we stumbled across this space for the first time, it was open, and we were able to have a little explore behind the high walls and the iron gates.

You will find the Crematorium between Müllerstraße and Nettelbeckplatz on the site of what was the first cemetery in Wedding, opened in 1828. There they built Prussia’s third, and Berlin’s first, crematorium and it continued its operations until 2002 when it was finally closed. Now it is rented to an organisation who put on cultural events in the space, such as a film screening during the festival in January which is how we were able to get in there to look around and for Katrin to take these pictures.

Of course, this corner of Wedding is much quieter today than it was during its manufacturing hey-day, and the population of the district as a whole has dropped by a third since its peak in the 1920s and 1930s. Most of the factories and workshops are gone now or have been turned over to new uses, and as we were exploring on a Sunday morning the streets were even quieter than usual. But still, there were cars on the streets and the bark of dogs, drinkers waiting for opening time outside the corner pub and market stalls with music on the Nettelbeckplatz… there was life, which made the silence and calm behind the brick walls of the crematorium even more startling and – of course – apt, considering that this was the destination for the final journey for so many Weddingers and other Berliners over the course of its century and a half of operation.  It was another of those Berlin moments, as we discovered a corner of the city within fifteen minutes stroll of our apartment, that we had not known existed, and we were thankful again that this place can continue to throw up such surprises and discoveries however long we live here.

If you are interested in discovering more about Berlin Wedding, I am running another tour in cooperation with Slow Travel Berlin on Thursday 25th April… the tour is about three hours, costs €15 per person, and there are still some places available. You can book the tour online here. 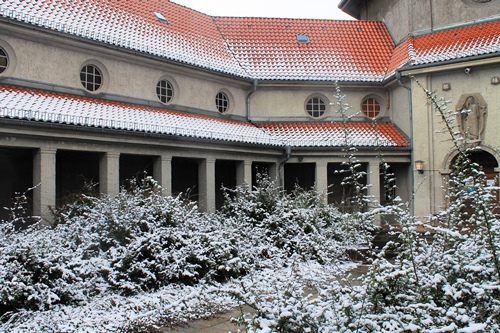