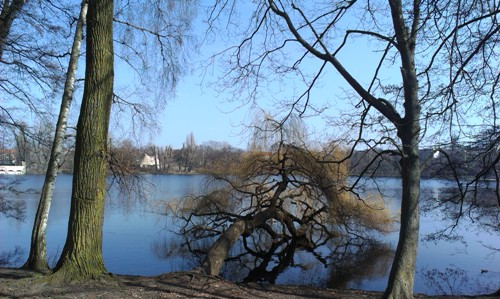 It has been a long winter. The snow fell and was still on the ground way into April, even after the bathing lakes of Berlin were supposed to be open for business. Last year we welcomed spring with a walk around the lakes of Hohenschönhausen in the middle of March. This year we have had to wait almost a month longer to cast aside our winter jackets, but we were finally able to do so this weekend for a walk around the Weißensee.

It seemed as if most of this corner of Berlin had the same idea. Kids ran through colourful patches of flowers that had finally brought life to patches of grass left brown and muddy from the harshness of the long winter.  The water remained too cold to swim, but people gathered at the bathing beach to drink coffees and beers at the water’s edge, turning their faces to the sun. Tightrope walkers balanced on ropes tied tight between trees… joggers and dogs dodged strollers on the path around the lake… frisbees sailed, bike wheels spun and birds sung… and people were polite and courteous with each other, as if the mood of an entire city has been lifted by the emergence of the sun and a raise in the temperatures.

Berlin’s winters are notorious, especially for newcomers, although I have always been a fan of the cold and the snow. This year though it was extreme and a little too much… and it seems, finally, as we approach May, that it might finally be over…