At the Black Sheep café in Amherst a group of three students work at their laptops at three different tables until the number of people searching for a place to sit becomes too large to ignore and they gather their things to sit together in the table by the window. The act of togetherness does not appear to aid their work ethic as they spend the next twenty minutes discussing whether or not it is too cold to go outside for a cigarette, and the relative merits of different graduate schools in California. On the strength of the first glance, most of our fellow customers appear to be either students or have some connection to one of the educational institutions of the town, and the noticeboard by the toilets is filled with posters and notes relating to political, social and cultural activities both on and off campus.

Amherst can be found on the Pioneer Valley in eastern Massachusetts, a couple of hours drive from Boston, and along with its neighbouring towns the business in these parts is education. The centre of Amherst – a collection of red-brick and wooden buildings scattered around a sloping lawn – is dominated by the campus of Amherst College, a private liberal arts institution that dates back to 1812 and offers undergraduate classes to just over a thousand students. Down the hill, towards the farmland that lies on either side of the Connecticut River, is the University of Massachusetts Amherst (UMass), the flagship campus of the University of Massachusetts state system and the largest public university in New England, with 27,000 students and more faculty members than the College has students.

From the Black Sheep we explore the bookshops of the town centre, check out some options for dinner in the row of eateries on what can be described as Amherst’s main street, and then wander amongst the small and graceful buildings of the college campus. It looks like every college movie you have ever seen and you cannot help but wonder what it would be like to live and study here. Down the hill, at UMass, we wander through a campus that brings back many more memories of my own university experiences. Although the university dates back to 1863, much of the campus was built following the Second World War, the GI Bill and the continued expansion through the 1960s and 1970s, and the brutal concrete aesthetic of the Fine Arts Center and the Campus Center reminded me of our very own architectural wonder at the University of Leeds, the iconic and unloved Roger Stevens building.

On the very weekend we explored the contrasting institutions of Amherst an article appeared in the Boston Globe by Max Page, professor of architecture and history at UMass, discussing the subject of the campus, the “brutal beauty” of its buildings (interestingly, a similar phrase subtitles this blog article about the Roger Stevens building), and the need to protect the architectural history of the campus despite what the majority of people might feel about the aesthetic appeal of the buildings themselves:

“In our age, when the very notion of government’s role in social betterment is under attack, Umass buildings from the golden age of public higher education stand for a faith in the public sphere. It is possible to look at the library and see only the chips that once fell from bricks in the upper story, or think about its history of out-of-service elevators. But it is also possible to stand in awe at the idealism of building the world’s tallest library, open to anyone, 24 hours a day. The Fine Arts Center represents a moving decision to ask one of the premier architects of the day to design first-class art, music, and theatre spaces for the sons and daughters of working men and women of Massachusetts … they are landmarks, pointing to what must always be the founding ideal of our flagship campus: public investment in our public schools and a belief that this kind of institution is the cornerstone of democracy.”

Reading the piece and then exploring the campus, I couldn’t help but think of other examples of so-called “ugly” architecture that represent something far more positive than perhaps their more aesthetically-pleasing counterparts. The “Altbau” buildings of Berlin, for example, are now highly prized in their renovated form for their large rooms and high ceilings. But the much maligned post-War housing estates in both the east and the west of the city were built to provide relief for ordinary people from the dreadful conditions in the old tenement blocks, and with central heating and your own bathroom as an added bonus. If there is one thing that writing this blog, and reading others over the past year or so, has done, it has been to make me look beyond the first impression of a building and try and get a sense of the context and the ideals behind why something was built.

So although I found the campus of Amherst College more appealing, and even perhaps more human in scale, I could appreciate Max Page’s point about the big brother at the bottom of the hill, and why the buildings that mark one of the greatest expansions in educational access in this part of the world deserve to be recognised and protected as much for what they represent as how they look. 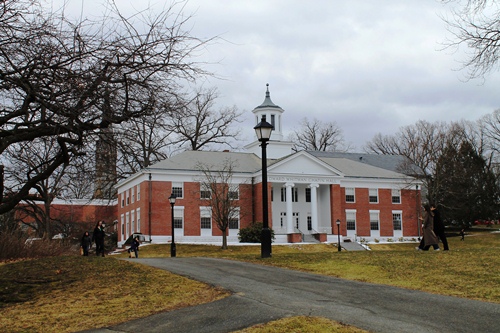 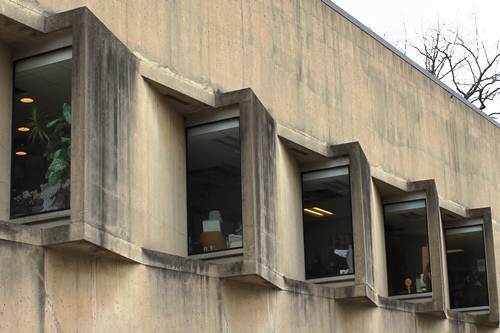 3 thoughts on “The College and the University, Amherst”