When most people travel to the Baltic island of Usedom, the attention is taken – understandably – by the sea. Most of the island is in Germany – with only the town of Świnoujście at the eastern end in Poland – and from north to south it is a line of holiday resorts that date back to the nineteenth century, the coming of the railway, and the development of seaside rest cures and vacations for the growing populace of the cities of northern Germany.

But the island is not only built on tourism. Before the first bathers arrived, the main economic activities on Usedom were agriculture and fishing, and that continues to this day. But whilst some of the fish would be and are pulled from the Baltic, a good proportion of the industry is focused on the inland sea that separates the island from the mainland. The communities that face the Achterwasser as it is known still target the tourists, with campsites and signs advertising rooms and apartments for rent, marinas offering boat trips and kayak tours, but it feels less developed than those resorts along the coast, and that these are still places where people live and work, even in the off season.

We took a trip to the southern point of the Gnitz peninsula, which protrudes into the Achterwasser south from the resort town of Zinnowitz. There are a couple of communities on the peninsula, including Lütow and Neuendorf, but the single road in and out, as well as the late autumn afternoon that we visited, gave the place a certain off-the-beaten-track feel which was added to as we passed a hotel complex, shuttered and closed, the paint peeling from the sign advertising the swimming pool. We drove until the road ended, at Lütow harbour, and from there continued on foot.

South of Lütow at the tip of the peninsula is a nature reserve, and we walked through a landscape of wetlands and grass fields, the water of the inland sea shimmering in the afternoon sunshine and the spires of the towns on the mainland blurry in the haze. We passed around the tip and then climbed a sandy hill held together with pine trees, and fine views north towards Wolgast where the shipyard cranes were visible in the distance. As we moved away from the water, inland and back towards the Lütow village, we stumbled across the campsite, walking through a well-organised if slightly run-down collection of camping places and static caravans. It was mostly empty, aside from a few caravan dwellers, but it was not hard to image the sound and the smells of the campsite in full summer swing, and the constant foot traffic back and forth through the trees from the tents to the beach.

Tourism, agriculture and the water. It was only at the end of our visit to Gnitz that we discovered another economic activity in this part of the world, as we came across a couple of nodding donkey oil wells working away in what looked like a back garden, and the corner of a farmer’s field. It was only later that we discovered that Gnitz had been the location for something of an oil boom during the GDR years, as 21 wells were dug on the peninsula to extract at the peak of operation in the 1960s some 220,000 metric tons of oil from two and a half kilometres under the ground. Now there are only seven still in operation, and the amount of oil is a tiny fraction of what was extracted before. 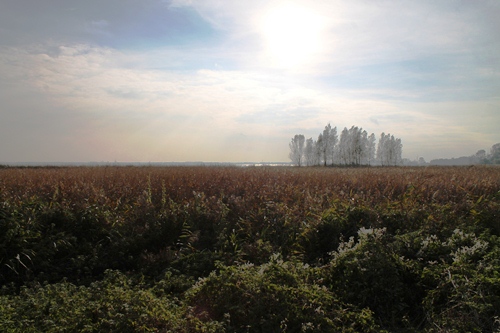 2 thoughts on “The Gnitz Peninsula, Usedom”