The night train is one of the great travelling experiences, and sadly – according to this article in the Guardian – it is one that is under threat. I have taken many night trains across Europe, from a first experience in an eight person compartment between Prague and Budapest that probably should have put me off the idea for life, to the journey we took a couple of years ago from Paris home to Berlin, introducing Lotte to the excitement of falling asleep as the train moved through the suburbs of one city and waking as a new city in a new country came into view. That service is one of the night trains that will no longer be running by the end of the year, and it is not only a great shame, but one that feels shortsighted in an era when we should be looking at ways of reducing the environmental impact of our travels.

Back to that first night train experience: I was travelling with two friends on an interrail trip around Europe. We had started in Zurich and were making our trip in a loop through Germany, Czech Republic, Hungary, Austria, Slovenia, Italy and back to Switzerland. On the way we only took two night trains. The second was from Venice to Rome, and we shared a compartment with a couple of African nuns. The first was, as I mentioned, from Prague to Budapest and it was pretty much a nightmare.

It began jauntily enough, following beers in the Prague station bar and a brass band on the platform, and the night train veterans smoothing out their bed sheets and climbing into their pyjamas even before we had pulled out from the station. Our interrail tickets did not include a sleeper compartment, just a normal seat, which we had reserved earlier that morning. When we found our seats they were in a compartment for eight, and there were five other passengers – all women – already in there. We squeezed in, all apologetic smiles and nods, and everyone was happy enough… but it did not take long before it became clear that this was going to be an extremely uncomfortable journey. None of us slept, except for the woman sitting next to me who used my shoulder as a pillow and left a damp patch of drool on my hooded top, whilst her friends ate their way from the Czech Republic to Hungary … I can still smell the garlic sausage. The day we had hoped to gain in Budapest by taking the night train was spent wandering around like zombies.

Of course, we had done it wrong, and a few years later I made the exact same journey only this time I booked myself into a bed, sharing a sleeper compartment with my travelling companion and a Swiss businessman who took the top bunk and fell asleep before we had returned from the dining car. We drank Czech beers and played chess, before returning to our beds where we slept soundly – except for the border crossings – all the way to Budapest. The same stretch of track, and yet a profoundly different experience.

Since then I have taken overnight trains to Munich, Trieste, and Rijeka. I have travelled home from Paris, and from Moscow to St Petersburg. I have also taken overnight coaches from Dubrovnik to Venice (the Rocky series played out in its entirety and badly dubbed into Croatian) and from Cape Town to Durban, and I can tell you now that this is no substitute. I have heard word of some incredible sleeper coaches in South America, but for Europe it has to be the train all the way … and yet from the news today it sounds as if these memories could soon be all that is left, with no option to make new ones except on some high priced cruise ship on tracks, such as those Orient Express services designed to make you feel you are living in a less-deadly recreation of an Agatha Christie novel.

I love many things about night trains, from watching sleepy villages and their streets deserted beneath the orange glow of the lamps as the train passes through, to the strange companionship – often unspoken – that you develop with your fellow travellers. It is hard to put up barriers when you are standing in jogging pants and a vest, brushing your teeth in the carriage corridor. It was wonderful to witness Lotte’s excitement on that first night train experience, and it makes me sad that it is going to be increasingly difficult to repeat it. I don’t know enough about the economics of train travel to know what the solution is, but it seems to me to be a crying shame. 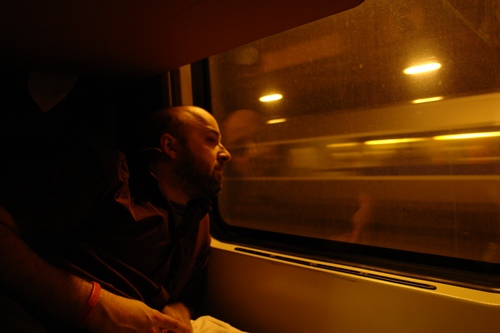