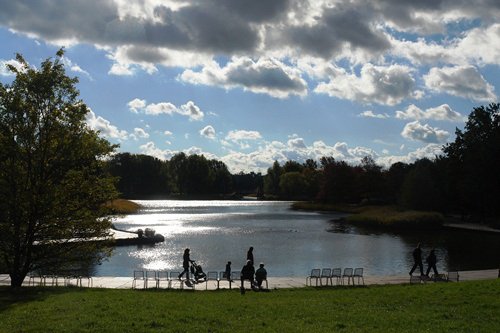 My friends at Slow Travel Berlin have just released the second print run of their most excellent 100 Favourite Places book… it is a collection of, well, a hundred of the Slow Travel Berlin writers favourite places in the city, from museums and bars to shops, parks, architecture… and more. Everyone I know who owns a copy – including Berliners such as Katrin – are impressed by the choices, the writing and the photography, so if you are coming to Berlin at any time soon it is the only guide you need.

I asked the founder of Slow Travel Berlin, Paul Sullivan, to select an extract from the book that he thought would suit Under a Grey Sky, and he choose one of his own favourite places, the Britzer Garten in Neukölln:

Given its reputation for industry, war and high-rise buildings, visitors are often surprised at how pleasantly green Berlin is. With almost a fifth of the city covered in trees, it’s quite possible to be diverted regularly from the city’s turbulent past by at least one of the city’s 2,500 parks and gardens. One of the loveliest is the Britzer Garten, which laps at the southern fringes of Neukölln.
Built in 1985 for the Federal Garden Show, the garden was originally designed to provide a green escape for local residents whose excursions into the countryside were, at the time, impeded by the Berlin Wall.

Created in the manner of a well-manicured English Garden, the park covers 90 hectares of scenic lakes, blooming meadows and rolling hills. Embark on one of the marked trails and you’ll discover sculptures, springs, bridges and streams – as well as a host of impressive floral displays such as the Karl-Foerster shrub garden and a famed rose garden featuring 250 different varieties. Visit during April or May and you’ll witness ‘Tulipan’ – an incredible blaze of 500,000 tulips in all colours, shapes and sizes along a 2-km trail, while in summer some 10,000 dahlias put on a similarly jaw-dropping performance.

Lots of love and imagination have gone into the kid’s areas too: there’s a witch garden (Hexengarten), a water playground, a petting zoo and an entire tribal village made of clay. Also intriguing is the Kalenderplatz, the largest sundial in Europe, which comes with its own solar system walkway. If it all gets too exhausting, hitch a ride with the miniature train, or seek respite in one of three café-restaurants.

The ‘reptilian’ Café am See (built by architect Engelbert Kremser) is the most visually stimulating; the Bistro am Kalenderplatz, with its large picture windows, gets the most natural light; and the restaurant Britzer Mühle hosts a beer garden next to a 20-metre-high, 12-sided Dutch windmill. Built in 1865, the windmill is the last fully functioning one in Berlin; it’s still used to grind flour now and again, and even sells bread some weekends.

If you are interested in the book, please note that 100 Favourite Place is a profit-share project. This means that everyone involved is paid fairly and transparently according to their input. By purchasing this product you will also be supporting all of the free content on the broader STB platform – and since they’re donating 5% of all profits to a local charity, you will be supporting good social causes in the city too.