Just less than a week in a Japan and it remains a jumble of memories in my head. Here is the second half of my fragmentary tale of a journey to the other side of the world…

On a Sunday morning we take the train to Hibuya and then walk through the wooden gate into the grounds of the Meiji Shrine. This was once parkland where the Emperor Meiji – the man who opened Japan and ushered in a half century of incredible change, including a social, economic and industrial revolution – and his Empress Shōken has been known to visit for periods of rest and reflection. The paths leading through the woodland to the shrine that was built in their honour is flanked with billboards telling some stories of the Emperor and the Empress, as well as their poetry and other reflections. Only a short stroll from busy city streets, and despite there being a lot of people walking the gravel trails with us, it is a peaceful place. The crowds get thicker at the shrine itself, drawn to the site of the wedding party walking through the grounds. At the front the couple are in traditional dress. Behind then men are in smart suits, the women in dresses, and all the bags that dangle from their arms carry the name of famous designers from around the world. The bag that it comes in, it seems, is as important as the gift contained inside.

This should not be a surprise, because I do not think I have ever been to a city so devoted to shopping in all its many and varied forms. Of course we visit the Tsukiji fish market and marvel at the sheer volume and range of what can be pulled from the oceans, and then follow narrow alleyways beneath the railway tracks at Amayayokocho which was once the centre of Tokyo’s post War black market and which now, despite appearances, houses the shops of some of the most famous urban fashion brands. And then we head to Roppongi, and the Tokyo Midtown and Roppongi Hills real estate developments, built around glamorous and jaw-dropping shopping malls or the busy street at Omotesando which is thronged with people on a Sunday afternoon. It is to the latter we walk after we have been to the shrine, and see a queue of young people standing patiently in a long line for some shop or other. “It must have been featured in a recent magazine,” my friend tells me, “This is what happens. It is in the magazine and then the kids flock here for a week or two, until the next edition and the next flavour of the month is announced.” As we walk down the line we try to guess what they are queuing for. Handbags? Hats? Trainers? The latest in Japanese denim? The answer, it turns out, when we reach the head of the queue, is popcorn.

We take a trip out of the city, on a commuter train around the bay to Chiba, and then a single carriage branchline that winds its way slowly through suburbs and then farmer’s fields, until we reach rolling hills and thick forests. We arrive at the end of the line as the only passengers left on the train, and then a minibus takes us along narrow hillside roads to a tiny village and our Ryokan – our place of rest for the night, built around the Onsen, the hot springs. We go for a walk down to the waterfall and then try out the baths, before being led down to our own private dining room where it is time to start another Japanese feast. Shabu-shabu normally means meat and other ingredients added to a simmering pot of stock in the centre of the table, but we are having fish. One by one we add and take out (to eat) different things to the pot. Tofu and vegetables. Fish. Noodles. There is a bewildering array of side dishes and other delicacies on the table. We eat and drink for a couple of hours until we can manage no more, and then we are led back to our room where our beds have been laid out on the floor. Sleep comes early and easy.

Food. I saw a lot of things in six days in Tokyo, but when I think about it now it is the food that remains the strongest in my memory. On the last night we walked out from the hotel, led by a couple of friends into a warren of narrow streets in a fairly unremarkable business-orientated corner of town. Down a back street and we are led up some stairs into a Yakitori joint, filled with smoke from the grill and the numerous cigarettes, and begin to eat a meal that is the total opposite of the feast the night before. Now it is drinking food, salty and greasy skewers of every single part of the chicken to be washed down with plenty of ice cool beer. We eat breasts and thighs, gizzards and livers, and drink quite a lot of beer. The number of skewers piles up. We lose track of what we have ordered. The place is loud and lively, with the sound of the cooks, the sizzle of meat on the grill, and a lot of tipsy conversation. It is a friendly way to spend the final evening, with good company and in a place we would never have found without the nose and the knowledge of our local companions. 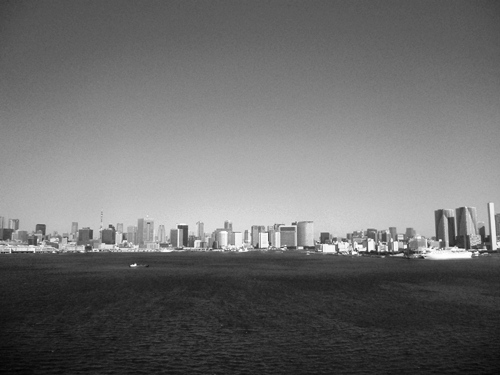 And then a bus out to Narita, riding high on the overpass between high skyscrapers and over a bridge with commanding views of the harbour and the skyline. Ninety minutes to try and begin to make sense of a whirlwind trip. But the page on my notebook remains blank on my lap. One thing is clear though: I want to come back. 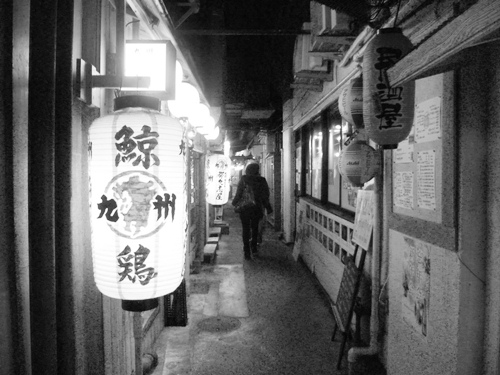