The captain of the boat is sceptical.

“Are you sure you want to go out?”

There only about eight of us hanging around on the jetty, hands stuffed in pockets against the cold. We nod, perhaps as much in order to get aboard and indoors. He sighs.

And it is true. We arrived in the town of Waren at the north end of the Müritz lake about three hours ago, with fog engulfing the town and visibility at about fifty metres. We hoped that by waiting until later in the afternoon it would have the chance to clear. And it had, a little, but as the boat made its slow progress out from the harbour it was hard to make out the opposite bank.

Inside the vessel things are pretty good nevertheless. Built in Egypt, it had its first voyage up the Nile to Alexandria before being shipped to Hamburg and then a second journey along the rivers and canals until it found its home in this corner of eastern Germany. It dates back to the early 1990s, but it looks older in style and atmosphere. But we are comfy on its simple seats, gazing out of the window and across the water, freshly poured beers on the table in front of us.

Waren is a medium-sized town of about 20,000 residents, some of whom work in the largest local manufacturing company that makes boat propellers for ship-builders around the world. But in this part of the world the biggest business is tourism, and back in the harbour the number of guesthouses, restaurants, bar and pizzerias along the waterfront give you a sense of what it must be like on a warm summer’s evening, even if it is hard to imagine now, on a November Saturday, as the town retreats off the back of the boat and into the fog.

We are not the only ones out on the water though. In the middle of the Binnenmüritz – the bay at the top of the lake – we pass fishing boats anchored on the calm water. As we pass the two fisherman aboard wave with one hand as they roll cigarettes with the other, all wrapped up in waterproofs and bobble hats against the cold, their rods sticking out over the water from either side of their boat. We climb out onto the top deck as the captain tells us we will not be going out onto the main lake. There is no point as there would be nothing to see.

Instead we make our way along a canal that is part of the complex network of waterways in the region and which links Waren and the Müritz with the next lake and the next and the next, all the way to Hamburg. We pass large houses with gardens running down to the waters edge, the leaves and reeds showing the last signs of autumnal colour before the winter turns everything monochrome. In the shallows we spy a Grey Heron and some Great White Egrets. We pass beneath the road bridge and the canal opens out.

“As you might have noticed, we have reached halfway,” deadpans the captain over the tannoy. “So we are going to turn around now and head for home.”

Back on the canal we pass a steamboat, this one filled with people at every table, the waitresses hurrying back and forth along the aisle of the open cabin. With twenty minutes to go until we arrive back in Waren we interrupt our own sailing companion from her reverie and order one more for the road… or the water… and to toast our steady progress back through the fog towards dry land. 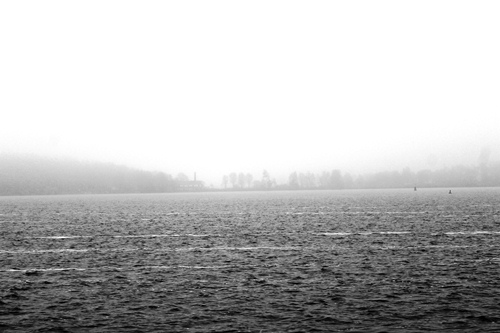 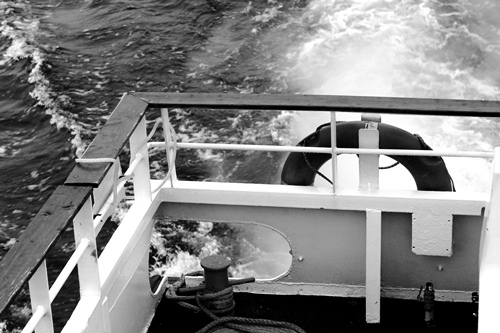 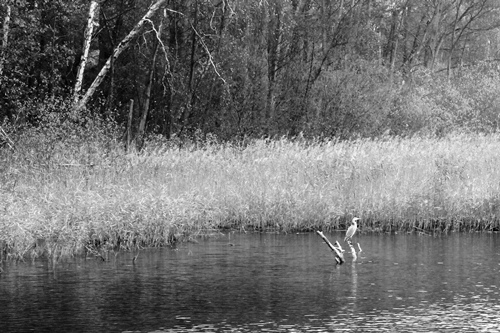 1 thought on “Fog on the Water: Waren and the Müritz”