I arrive in Berlin at Ostbahnhof, from where I catch the train to Alexanderplatz. They are ready for Christmas in the heart of the square, the wooden market stalls clustered on the wide expanse of concrete. Smoke and steam rises and the crowds stream and warm along the paths of an imagined village attempting to return the visitors to some mythological past on the very site where the leaders of a regime attempted to create a new mythology for the future. Is that what I think, looking down on the scene? Not really. Instead I think, like the people do, of a sausage and some glühwein, distracted by the bright lights of the department store, ushering in those of us who are searching for the perfect gift.

No shopping today – I am not sure who I would buy for – and so I walk away, towards Rosa-Luxemburg-Straße. It is darker here, just the street lights and their reflection in the damp pavement. Soon, at some point in the future, there will be fashion stores and burritos that will be exported to Wittenbergplatz, but not yet. Just the old Kneipe with the wooden benches outside and a cavernous kebab shop built by an investor who was ahead of his time. I wonder if, in years from now, he walks the Rosa-Luxemburg-Straße and regrets calling it quits. If he had only hung on a year or so longer…

What will remain, from my walk towards the hulking Volksbühne theatre, three letters shining in neon atop the roof and against the evening sky? OST. East. Will that stay as the surroundings change? The Sex Shop, for sure, and the cinema. The PDS will become the Linke, but Karl-Liebknecht-Haus will remain true to its roots. I stop on the corner for a kebab at my favourite stand, huddling against the cold beneath a plastic awning. This patch of wasteland on the corner of Torstraße is surely too narrow for them to build on, so I should not fear losing this culinary delight even if – as is to be expected if you have too much of a good thing – my tastes will change as the years pass by.

At the top of the hill I turn away from the casting alley of the pre-migration hip and trendy, and into the leafy square with a  church at its heart. Someone will tell me, later, that this is the highest natural point in the city, but this claim to fame was long-eclipsed by the pile of wartime rubble pushed together to form the mountains of the city, grassed over and used for toboggan runs, rock climbers dreaming of the Alps, and – for a while – American spooks who commanded the best view of them all. There are no views from the Zionskirchplatz, not unless you climb the tower above the church where once punk concerts were held in defiance of the regime that built the Alexanderplatz, and dissident pamphlets printed in the basement.

Are the ghosts of rebellion lingering now on the cobblestones in front of the church doors? This has always been a place where authority was defined, from the brave opposition of the pastors to the Nazis to those punks who discovered skinheads waiting for them after the show was over, ready to do battle whilst the “People’s Police” looked impassively on. No, they are gone from the Zionskirchplatz, but still there is my Vietnamese friend who runs the grocery store in the corner, selling me overpriced drinks and basic supplies when I am too lazy to walk to the supermarket.  He never cracks a smile for years until he gets to meet my daughter. I don’t begrudge him the prices he charges, or his surely demeanour, and I am sad, later, when I return to the square and find the grocery store replaced with a shop selling clothes hanging from wires where once the shelves were stocked with curry powder, noodles, and HP Sauce. 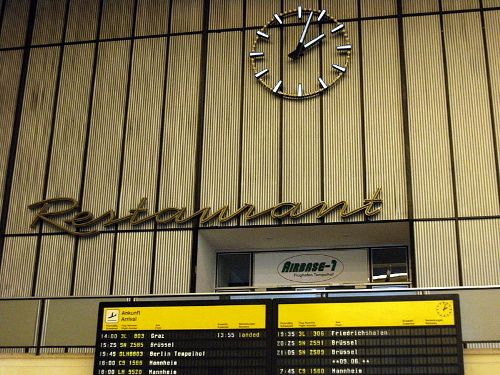 The next morning I stand in the cold on an S-Bahn platform in the south of the city. The sky is clear and it is promising to be a glorious day. I have the place to myself, except for a slightly-overweight man in uniform who will wait for every train but never climb aboard, and a young man underdressed for the weather, smoking despite the signs asking him not to. The man in uniform ignores the cigarette between the younger man’s fingers, looking instead in the opposite direction, down the tracks.

They are working on the line so I need to change at Schöneberg and catch the ring across to Hermannstraße. We pass by the wide expanse of Tempelhof; an airport that is barely operational. I know it will close soon and I wish desperately to fly in and out of there at least once. Where can I go? To Brussels, Zweibrücken… is there a flight to Sylt, to Westerland? Do I, like the song, have to make do with Wannsee?  In any case, I leave it too late, and the only times I will pass through the entrance hall and descend the steps of the departure gate will be for a fashion show or a rock festival. But now, on the airfield, a small plane taxis towards take-off and at the far end, beneath the control tower, a giant airship sits on the tarmac. It is a glorious view through the S-Bahn window but they have been working on the line for a while and I have made this detour too often. I am starting to take it for granted.

At Bornholmer Straße I look south towards the city centre, the television tower standing high and mighty above the rest of the city. My friends, a couple who live just down the street in an unrenovated flat that she rented with her first paycheck as a teacher after the Wall came down, will soon be moving on. Not because the rents will increase with the inevitable restructuring of the building, but because they are looking for warmer climes. She was born in Berlin, and he comes from across the ocean… they met in a third country, and Germany was never going to be forever.

I am stood on the bridge where, they tell me, you have the best views of the fireworks on New Year’s Eve, and I cannot decide which way I want to walk. I could go east, following the bridge down into Prenzlauer Berg towards my friends’ apartment, not far from all the old embassy buildings that gather in a cluster on the border with Pankow. I could press on, to Schönhauser Allee and on, to Kollwitzplatz. In the coming years I will create some memories here, a district forever central to my personal geography of the city but one in which I will not live for any length of time, except for a brief six month interlude on Greifswalder Straße.

Or I could walk West, into Wedding where at some point I will re-orientate myself, a long way from that leafy S-Bahn platform to the south. For now Osloer Straße is nothing but a change from the U-Bahn to the bus, to take me to England, to Birmingham and to Warwick. Coming to Berlin I gain the unexpected chance to learn about a corner of my own country. When I wait for the bus to Tegel is that Angolan flag already flying from the apartment block on the other side of the street? I think it might be, but I cannot be sure. It will be there later, when the station becomes less a bus stop and more part of a daily routine. But that is to come, in another time and further on in my journey through this imagined city I approached on a train  at dusk, just as the rain ceased to fall…

2 thoughts on “A journey through memory and the imagined city”