The mist hangs between the tall, gloomy pine trees as we climb down from the train. Only one other passenger stepped off with us, and by the time we have sorted ourselves out on the platform she has disappeared into the haze. At the level crossing, where no cars wait for the train to depart, onwards towards the Polish border, the guesthouse is shuttered and locked. “Closed, for January and February” states a handwritten note in the window. No refreshments here, and we are glad that this is just the beginning, and that we are walking in the other direction.

We pick our way through the village to the river, which is glassy and still like the weather. Which way does the water flow? It is impossible to tell. The path leads us right along the water’s edge, the reeds springy underfoot. We pick our way along the bottom of holiday cottage gardens. Across the river is a field, the ground ploughed and hard into row after row of snow-capped ridges. We have moved away from the main road now, and there is little sound except for the occasional bird call or an airplane coming into land in the distance.

A couple of hours later and we come to a town, skirting the outskirts through and industrial estate and a couple of ruins. We reach a couple of suburban streets, large cars parked at the end of wide driveways. There is smoke coming from the chimneys but otherwise no sign of life, except for a family of deer that cross the icy road in front of us, pausing for a second to look in our direction before disappearing into the undergrowth. By the time we reach the point it is impossible to see where they have gone.

Under the motorway and the landscape changes. Hills and ravines. More trees, thousands more trees. The signage we have been following all day leads us up an incredibly steep slope. Halfway up there is a concrete slab sticking out at an angle, and the start of a row of steps. We are grateful for the help but puzzled by their sudden appearance until we realize we are climbing up the side of an old ski jump, now swallowed by the forest. At the top, the high point of our walk, we eat our lunch and drain the rest of the coffee from our flasks.

There are only a few kilometres left, along well-marked snowy trails, to a spa town by the lake. Our pace increases with the thought of rest, of supermarket beers and a hotel room picnic. Out of nothing a couple appears. They look as surprised to see us as we are them. “Are we going in the right direction?” he asks, and I nod. If you spend Valentine’s Day walking the snowy, empty forest then you must be doing something right. We leave them behind, striding on through the woods until the lake appears, the promenade neatly paved and the park by the thermal baths sculptured. Hundreds of ducks and geese have left their tracks in the snow, and it is impossible to see where the proper, paved walkway goes so we make a straight line, adding our own tracks to the multitude.

We’re in no mood for detours, not now after twenty four kilometres. After all, we are planning to get up tomorrow morning and do it all again. And so we do. 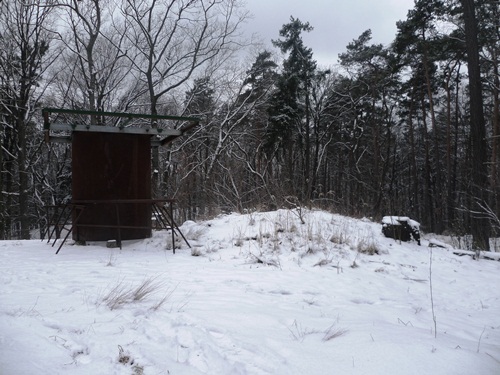 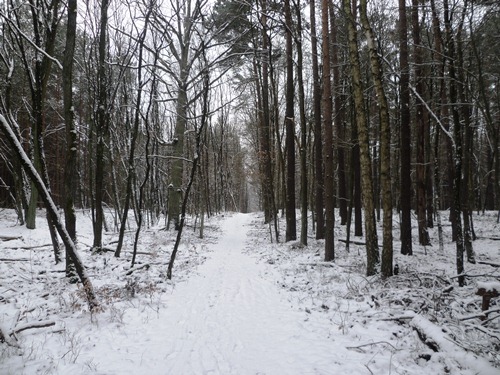 A more detailed description of our two day walk in the Brandenburg countryside has been published on Slow Travel Berlin.