Following the article that featured the wonderful photographs of Michael Lange of the forests of Germany I revisited the photographs I have taken in the woods of Ainsdale Nature Reserve just a 10 minute walk from my house. No-one would say that we live in the countryside but we are very privileged to enjoy the proximity not only of the woodland but one of the finest dune systems, beach and both salt marsh and freshwater marsh environments in Europe. This is the Sefton coastline, stretching 21 miles from Crosby in the south to Hesketh Bank in the north.

The woodlands were planted well before the Nature Reserve was established in 1980, initially in the 18th century but more so in 1887 and in 1893 when the first Corsican Pines were planted and by 1925 most of the woodland of today had been planted. Now managed by Natural England and The National Trust the woodlands do provide a supply of timber now that the trees are  fully mature but far more importantly provide a habitat for animals, birds and plants, many of which are rare and found only in unspoilt dune systems.

Access for people is along way-marked paths or by permit in all other areas, and walkers, cyclists, dog-walkers and runners make great use of the Reserve alongside the birders, plant and fungi enthusiasts and the red-squirrel watchers. I have been running, cycling and walking in the Ainsdale woodlands for over 30 years and more recently began volunteering for Natural England on the Reserve. Carrying a camera on most visits, in all weathers and at different times of year has provided a opportunity to record the changes, variety and the atmosphere of the woods and compile a visual record of this special little place.

This might not be quite the detailed and considered approach of Michael Lange but nevertheless a small snap-shot of a place, over time and one that I hope you will enjoy looking at as much as I have enjoyed making. Come and visit the Sefton coast sometime. 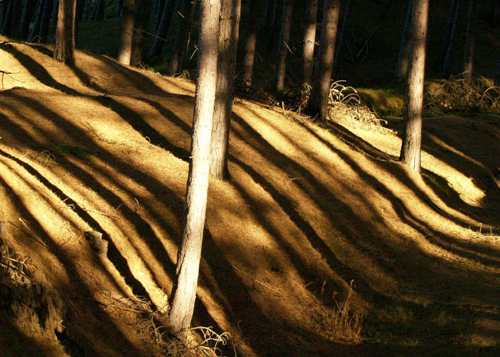