Our route took us out from San Jose, along a dusty, windswept valley until we began a steep climb up a crumbling track to a lookout point just below an old tower, where once they would light fires to pass messages and warning signals along the coastline. We paused for a moment, to catch our breath and to look back towards the town. The night before we had eaten fish down by the harbour and walked through the quiet streets towards our hotel. It was spring, and there was not much happening in the town, as everyone took to their local bars or their living rooms to watch Madrid in the Champions League.

The coastal path took us north, above jagged and dramatic cliffs, finding its way between the water and the dormant volcanos that give this corner of the national park such a distinctive look. The track had once been a mine road, and we came across abandoned buildings and old quarries that were a reminder of an industrial past in this corner of Andalucia. But all was quiet now, and in the ten kilometres we walked between San Jose and the Castillo San Felipe, where waves crashed against salt-eroded stone walls, we did not meet a single soul.

From there we turned inland, following the Rambla de la Capitana along a dry river bed that was dominated by the smell of the thyme plants that lined its banks. Here we had left the wild coast and plunged into what felt like an alien world of prickly pears and volcanic rock formations. The main road was close, but we could not see it, and so we approached each small village as if through the back door, passing the ruined and renovated old windmills that reflected once more a past where wheat was the principle crop around these parts… a fact that was hard to balance with the protected, semi-arid landscape through which we were trekking.

By the village of El Pozo, with its fourteenth century waterwheel and old whitewashed houses that reminded me of the villages in the Alpujarras and the long influence of the Moorish period of Andalucian history. Away from the park, we knew – because we had driven through it – that this part of Andalucia is now dominated by the twin economic drivers of tourism and so-called “plastic agriculture”, but here in Cabo de Gata it felt as if they had found the right balance between protection and access in this surprisingly wild and remote-feeling corner of the country, only half an hour or so from the lively streets of Almeria. 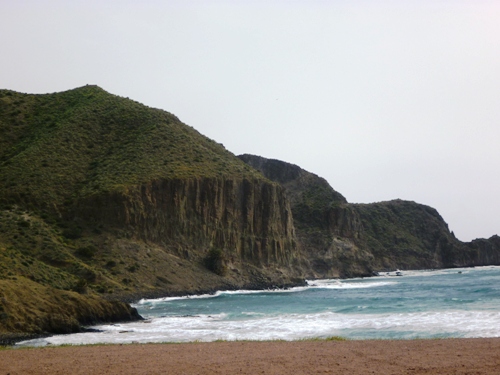 2 thoughts on “Along the cliffs – Cabo de Gata, Spain”