(above: inside the District Six museum, Cape Town)

An article I wrote for Slow Travel Berlin on the Olympic Village just outside Berlin was picked up by the Guardian as part of their Travel Network, in which they select certain blogs or articles from different travel websites to feature on the travel pages of Guardian.co.uk. One commentator wondered why anyone would want to visit somewhere like the semi-ruined Olympic Village in Elstal when there were more interesting places to go to in the city, and it got me thinking about how we chose to explore places – and which places we choose to explore – whether during our travels or closer to home. As regular readers of Under a Grey Sky will know, I am fascinated by places that can tell a story – whether in the middle of Berlin or a remote Scottish island – and I am certainly of the opinion that there is value to setting foot in these places, even if there is very little to see.

Why is that? Can I understand better the lives of workers in Wales, Germany or Sweden by walking through the relics of their industry? What do I learn about apartheid wandering the cleared streets of District Six in Cape Town? How do I further my understanding of the Holocaust by riding a bus from Krakow to Auschwitz to stand before a snowy field and try to comprehend what took place there? Some of us are simply interested in historical sites, whatever their state of disrepair, but there is also the more important issue about how or why we would maintain such sites, and what role they have in our understanding of historical events. 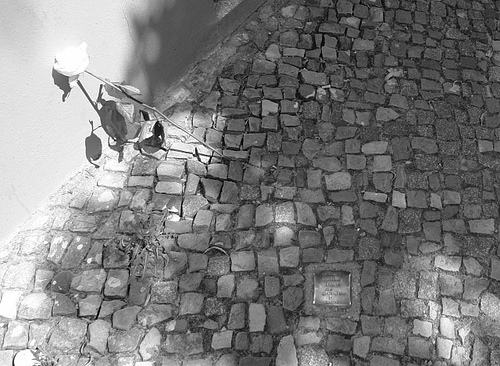 (above: a Stolperstein in Berlin. These have been placed in front of thousands of buildings in Berlin, Germany and elsewhere to commemorate the individuals who lived there and who were deported to the concentration and extermination camps by the Nazis. More info.)

These questions are especially important when it comes to places of memory and memorialisation, sites of conscience or other locations where the aim is to inform and educate, and to make sure people never forget what took place. Those who come to Berlin often feel overwhelmed by the fact that, seemingly around every corner, there is another memorial or site of remembrance. There are museums, walking tours, memorial plaques and golden cobblestones set into the pavement. The stories that these sites tell are some of the most brutal and tragic of twentieth century history, and yet they have become popular tourist sites alongside which coaches park and cameras flash.

This does not necessarily make me feel uneasy. Coming face-to-face with a place or a memorial brings the events that happened there or the actions they commemorate to the forefront of our minds. Being in such places feeds our imagination, even if we would rather not think about what it is that took place. It makes sure that victims are remembered and helps a society come to terms with what has been done, often in their name.

Of course, the Olympic Village is not one of these places, even if the 1936 Olympics were used by Hitler and the Nazis for propaganda purposes and generally succeeded despite Jesse Owens’ glorious efforts on the track. It is what happened elsewhere and what came later that “taints” the village, it that is the right word. But walking around that campus, with its crumbling shacks and huts, did help me imagine the scene better, and its state of disrepair did cause me to think about and question how we should maintain or look after historical sites such as these. It would be interesting to hear what others might think about this topic.