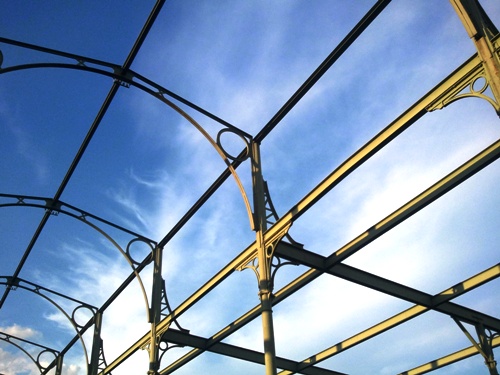 Walking to Sean’s new apartment on Friday we had to pass through the strange open spaces just south of the Storkower Straße S-Bahn station. This was once the central stockyard and slaughterhouse for Berlin although on even my old GDR maps this was referred to as its “former” function and until the 1990s it appears to have been little more than a wide open space. In the past decade or so the area immediately around the station has been filled with car parks for box-like shopping halls, some of the stores have built themselves into the old frameworks of the former buildings. Other metal frames have been left open and uncovered, standing in a patch of parkland, with grass growing beneath the iron skeleton, and locals drinking beer or grilling on those disposable barbecues as kids ride their bikes along ad hoc, dusty pathways.

Beyond the shopping estate new streets have been created in the past twenty years, and developers have built townhouses and gated apartment blocks, taking advantage of the twin opportunities of space so close to the heart of the city, and the weird quirk of city administration that means that this little sliver of land between Lichtenberg and Friedrichshain belongs to high-priced and gentrified Prenzlauer Berg, whatever the reality on the ground might be. In the short walk we passed by some fascinating contrasts in architectural style, from the old red-brick industrial buildings (including parts of the S-Bahn station), colourful Plattenbau of the German Democratic Republic, the post-Wende townhouses and apartment blocks, and an Umspannungswerk (electricity transformer station) that looks like a Museum for Modern Art.

A few steps beyond and we reached the first of the Friedrichshain streets, with the familiar rows of pre-war buildings in various states of repair and renovation. When we returned, a few hours later, there were more souls lounging on the grass and less cars being loaded with bags from the supermarket, and the falling sun made even this motley collection of post-industrial, discount-commercial and lego-residential buildings a softer and more attractive proposition. 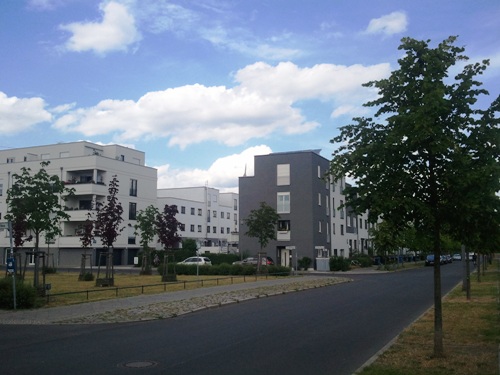 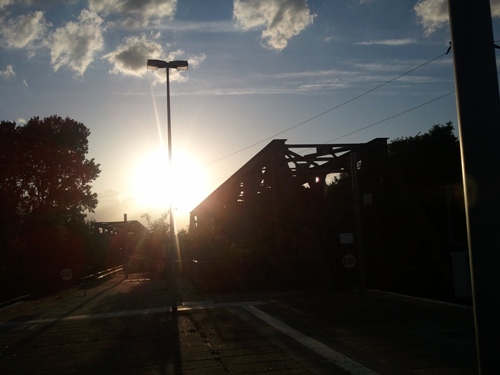