Sheila Scraton on a high walk in southern Spain:

Usually a winter holiday in Spain conjures up pictures of sun, sand and warm days as the welcome heat seeps into your bones after the long winter in northern Europe. We were visiting our cortijo (Spanish farmhouse) in the Alpujarras in Southern Spain for a couple of weeks, hoping for some warmth but realistic about the fact that the house is situated at about 1500 metres which is above the height of Ben Nevis (1350m), the highest mountain in the British Isles. The cortijo is above the village of Bérchules, a lovely mountain village perched above a spectacular river valley, the source of the Guadalfeo which flows from high in the Sierra Nevada to the Mediterranean sea.

As always the air is cool and clear in February but as soon as the sun appears from the south and shines straight at the cortijo, the heat can be felt and, even at low air temperatures, sun cream is needed!  Each morning we managed to enjoy breakfast outside on the patio although one morning we awoke to quite a surprise.  Overnight several inches of snow had quietly fallen and, as we opened the shutters, a black and white scene had replaced our normal February view of pink and white almond blossom across on the Contraviesa hills. As the sun arose opposite, the black and white was quickly replaced with a wonderful orange glow as the sunlight glittered on the snow flakes and the sky moved to a deep blue. 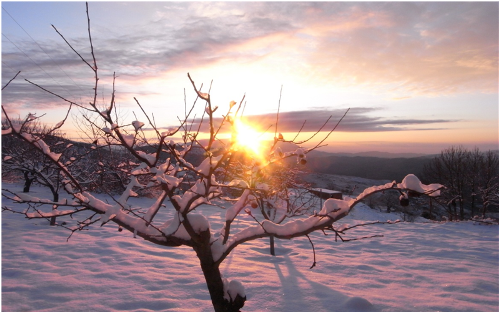 As we sat outside eating breakfast we could watch some of the snow slowly disappearing before our eyes but it still felt enchanting basking in warm Spanish sun with snow at our feet.

The next day we decided to drive high up the valley on a forestal road to where a footpath leads off through the trees and across to eventually meet the ridge overlooking the next valley which sits beneath the highest mountain in the Sierra Nevada (and in mainland Spain), Mulhacén at 3482 metres. The advantage of having a 4X4 Nissan became obvious as wherever the track was in shade, deep snow and ice required a careful, slow movement up hill. We set off walking through the trees, glad we had decided to go that day as the slow steady drip from the trees suggested that it would soon be reverting to its usual green forest of pine.

As we left the forest and set out slowly heading towards the ridge separating the two valleys we were traversing a mountainside that reached up to the peak of Peñabón (2113 m). Way below us across a spectacular view we could see boats glinting in the sun on the Mediterranean and, although not visible that day, the Rif mountains of Morocco can often be seen as a dark shadow on the horizon on clear winter days.

It was obvious that we were the first people to set foot on the track since the snow had fallen. Indeed throughout the day we didn’t see any human footprints or any other sign of people. In so many ways this makes it especially magical. Even though the terrain is easy, it feels so special to be the first to tread lightly across newly fallen snow. But we weren’t alone! As always we had binoculars trained on the sky for passing raptors and to try to identify the bird calls that emerged from the snowy fields and nearby forest. Today, though it was fascinating to try to identify the many bird and animal tracks as they seemed to lead us upwards towards our destination.  We could see the tracks of cabra de montaña, the wild mountain goats or iberian ibex that live high in the sierra, very like our fallow deer in the UK. Other tracks could have been wild boar, wild cats or genets all of which are present in the Sierra Nevada National Park.

Just as we were musing over what the tracks could be, I caught sight of a very large fox, quietly moving along a little ridge of a shallow side valley coming up from the lower slopes and crossing our track slightly higher. It moved slowly and cautiously and I was pleased to have my binoculars ready so that I could watch without it being too aware of my presence. It seemed far larger than those city foxes we occasionally see here in Leeds with a large bushy tail.  I noted where it must have crossed our path and as we reached that point the fox’s tracks clearly showed up as it had moved stealthily across and back into the security of the forest.

Knowing that we were joined on our walk by a variety of wildlife added to our experience and as we crested the ridge we were greeted by the wonderful sight of a pair of soaring golden eagles. They seemed to know we were there as they provided us with a spectacular undulating display, looping up and down around us before disappearing in a second as they folded their wings and shot off towards Mulhacén.

A few days before we had seen, what was probably the same pair of eagles, lower down in the valley. On that occasion we were treated to an amazing display as the eagles played with each other in the air, one trying to impress its mate by carrying a large twig in its beak, dropping it and managing to swoop, twist and turn to catch the twig again in mid-air. To see this mating display truly is a privilege that will stay with us in our memories.

Mountains provide us with an environment that feeds our imagination and stimulates our senses whether they be in the Sierra Nevada, Snowdonia, the Pyrenees, the  Alps or the lower hills of the Yorkshire Dales. As Robert MacFarlane writes in his fascinating book ‘Mountains of the Mind’:

The true blessing of mountains is not that they provide a challenge or a contest, something to be overcome and dominated (although this is how many people have approached them). It is that they offer something gentler and infinitely more powerful: they make us ready to credit marvels……Being in the mountains reignites our astonishment at the simplest transactions of the physical world: a snowflake a millionth of an ounce in weight falling on to one’s outstretched palm, water patiently carving a runnel in a face of granite, the apparent motiveless shift of a stone in a scree-filled gully.

The four of us walking that day had a combined age of 268 years. We may find that our challenges are different now, we no longer need to (or can!) overcome and dominate severe mountain terrain, yet the environment together with its wildlife never ceases to give immeasurable pleasure.

(The Hotel Los Bérchules (www.hotelberchules.com) provides a friendly welcome for independent travellers or organised walking holidays in the area)