Tom Salmon checks out the exhibition “The Unquiet Head” from Clare Woods, which is at the Hepworth Gallery in Wakefield until the 29th January 2012. The film above is an introduction to the artist and her work, and concentrates on the current exhibition:

On a typical wintery day in Yorkshire – grey, bleak, misty and great – we headed out to the Hepworth Wakefield, a new gallery that celebrates the area’s unique artistic legacy and exhibits the work of major contemporary artists. We were looking for a bit of culture, but the trip also gave me pause to reflect on how much I love living here and why Yorkshire is known (at least by us locals) as ‘God’s own county.’

The motivation for the trip was Clare Woods’ exhibition, in which she explores the visual and emotional power of rock formations in the British landscape. Her huge works on aluminium take inspiration from other artists like Hepworth, Moore, Sutherland, Piper and Nash, and some of the pieces look like they could have been inspired by Brimham Rocks in North Yorkshire.

What struck me most was how they echo that contradictory nature that characterises the Yorkshire landscape and personality; brooding and romantic, harsh and delicate. Epic in scale, the delight was in the detail. One of her pieces features the kind of Victorian engravings – or acts of vandalism, if you like – that you can find carved into the stones at the top of the Cow and Calf above Ilkley. The fictional and abstract landscapes, looming large on their 10m aluminium sheets, threaten to overwhelm the galleries at the Hepworth, and as if trying to comprehend Yorkshire’s epic landscapes, you need to stand back to take in the congested and frenetic scenes that Woods has created on these huge panels.

Yorkshire is a county like no other in the UK. It has a reputation for both industry and wilderness, tradition and innovation, the rural and the cosmopolitan. The mixture of heavy industry, those dark satanic mills, and the rolling moors and dales has inspired many artists, and it’s no surprise that you can find three of the UK’s best sculpture collections around Wakefield and Leeds. Benefaction, philanthropy, art colleges and natural inspiration have long supplied the inspiration and support for the likes of Henry Moore and Barbara Hepworth. 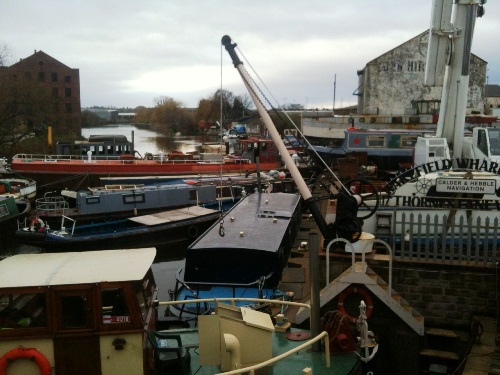 The Hepworth gallery is just as interesting as the exhibits it houses, and its modern form stands in contrast to an ageing industrial cityscape on a headland in the middle of the River Calder and the Hebble Navigation. Here nature and industry combines to create the space for art to occupy. The concrete gallery rises straight out of the water, above a series of barges waiting for repair and attention, and sits next door to a derelict mill. The new gallery and local industrial past sit side by side, the future and the past only ever so slightly apart.

Close by you can see a 1960s four-lane road, a medieval bridge, and a 14th Century chapel. Wakefield is typical in this sense – a mixture of Victorian civic planning alongside a more distant heritage – battered and bruised by the butchery of post-war traffic engineers, planners and architects, and the post-industrial decline of the second half of the 20th Century.

The gallery lies at the centre of the city’s regeneration project, and like in many other cities it is hoped that art and culture will absolve the problems of post-industrial urban decay. The 21st Century landmark now stares sympathetically at its dormant neighbours, and it is the kind of juxtaposition that you find in many stories about European urban renewal, reminding me of the old brick warehouses of Bilbao gazing across the harbour at Gehry’s futuristic Guggenheim museum.

The Hepworth Wakefield is an amazing place to think about space. It brings together the past and the present, human and natural, artistic and industrial, fictional and real. It inspires you to explore a little bit more and will no doubt bring hundreds of thousands of people to a forgotten corner of Wakefield. It also serves bloody good cake.

Tom Salmon is paid to be a search marketing nerd but is also a heavy duty human geography, design and architecture geek. He lives and works in Leeds, follow him on Twitter @tominleeds.

1 thought on “Clare Woods at the Hepworth, Wakefield”