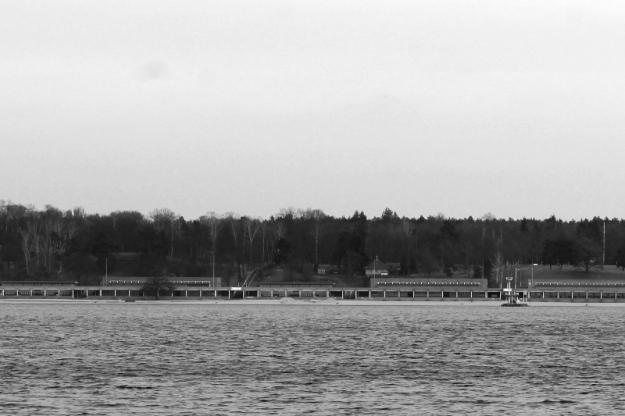 Over the next few months I will be walking around the outskirts of Berlin, starting each walk where I finished the last, until I complete a loop of the edge of the city. These walks will be written up for a new book project, and here on Under a Grey Sky I will publish some postcards from along the way…

From across the water the bathing beach is pretty much empty. No swimmers in the water or sunloungers occupied. No table tennis games played out on the terrace or beers served through the kiosk hatch. A solitary worker, climbs down from his tractor. There are a couple of piles of new sand on the beach. But that’s it. In a few months there will be thousands over there on the sands. Some will have packed their bathing suits with joy and anticipation. Others dreaming of Westerland. But from across Berlin they will head south, to Wannsee, and their beach.

The Strandbad Wannsee was born out industrialisation, of the needs of hundreds of thousands of city dwellers who moved to the metropolis by the Spree in the second half of the nineteenth century to turn it, by the 1920s, into one of Europe’s biggest cities. Most Berliners lived in small apartments in one became known, in the Berlin lexicon, as Mietskaserne – rental barracks. In the working class neighbourhoods of the city the apartment houses and the factories rubbed hard up against each other. These cramped conditions had catastrophic public health effects, not least in infant mortality rates. Health wise, things were worst in the summer. When the weather turned warm, the city stank. Air pollution above and an overwhelmed sewage system below. Through open windows across dank and dreary courtyards the noise of the neighbourhood filled the small apartments.

Psychologically too, things were difficult, for these were the first generations who had come to the city; from small towns and villages beyond Berlin and elsewhere in what was now the German Reich. They may have lived in the city, but many clung to the memory of the places they had left behind. An allotment garden provided a link. So did the lakes and forests on the edge of the city. So when the weather turned warm, the Berliners caught the train and headed out of the city. To the water. To Wannsee.

Technically, public bathing in Wilhelmine Berlin and its surroundings was illegal. But still they came, to this well-to-do villa colony by the lake, now linked to the stinking city by rail. In 1907 the local authorities came up with a solution, opening a stretch of shoreline at Wannsee to the general public. The industrialists and other villa owners put up a fight but it was to no avail. The Strandbad Wannsee existed, and would continue to exist through the Third Reich, the divided city and beyond. Today the beach might be empty, but give it a few months. The air is better in Berlin now. Apartments in the Mietskaserne of certain former working class neighbourhoods are some of the most expensive in the city. But Berliners still need that temporary escape. They will still come to the lake, and to the Strandbad Wannsee.

1 thought on “Postcards from the Edge, Part Eight: Strandbad Wannsee”