We returned to Berlin a week or so ago from our summer travels through Germany and France, straight back into the hectic normality of everyday life, and with a notebook filled with scribbles and reflections on the places we have seen and experienced. So where to start? On page one of course, and a man-made lake at the southern edge of the Harz Mountains…

On our second morning at the Wiesenbeker Teich and we emerged from our tents to a view of the forested mountains above the lake shrouded in mist. There was some rain in air, and from our camping spot above the water, it looked as if the lake itself was smoking in the early morning gloom. Apart from the campsite, there is not much around the lake. A crumbling hotel stands at the end closest to the town of Bad Lauterberg, but otherwise it is steep-sided hills falling into the water, with trees growing all the way down to the water’s edge.

If you can ignore the campers, and the man-made beach complete with waterslide, it feels like a lake to be found in the wilds of Sweden or Canada, and as I made my morning run along the trail leading from the campsite up into the hills, I half expected to come across a brown bear blocking my path, even if the most dangerous thing living in those woods were the swarms of mosquitos. But the Wiesenbeker Teich is anything but wild, and its existence reflects the long history of human settlement in these mountains at the very heart of the German-speaking world.

The Harz Mountains and its blanket of forests has long been a popular tourist destination. From the moment the likes of Goethe and Heine headed to the hills and came back with tales of prancing witches or drunken students, both of whom were laying siege to the regions highest mountain, the Brocken, this has been a place to chase the fairytales, walk in the woods, and escape city life for a while. It should come as no surprise, given the importance the forest and the trees to the German imagination, something I have written about on Under a Grey Sky before:

From the Germanic tribes emerging from the trees to thwart the imperial ambitions of the Romans, the forest has been a cornerstone of the founding mythology of German culture and identity. Those fairy tales that still inspire in me a sense of foreboding amongst the trees well into adulthood came, of course, from the forest heartlands of this country, collected by the Brothers Grimm as they travelled. In a painted by Casper David Friedrich a Napoleonic soldier stands, alone and surrounded by the forest looming menacingly all around him, at once threatening to the soldier but a sanctuary for those who belong, well hidden amongst the trees.

But there is another history in the Harz, beyond the fairytales, the great writers, and the crowds of hikers that followed in their footsteps. The Harz was also mining country, a place where the riches of the earth have been extracted – so the experts believe – since the Bronze Age. The true golden age of mining in the Harz began in the sixteenth century and lasted until the 1930s – although the last mining operation only closed down following the fall of the Berlin Wall in 1992. What they were digging for, through those long centuries of hard and brutal underground work was silver, lead, iron and copper. These were some of the deepest mines in the world, and although they brought great riches – especially to the royal houses of Hanover and Braunschweig-Wolfenbüttel – these were tough places to work, and the mining villages themselves were tough places to live.

One of the side effects of the mining industry in the Harz was the development of a network of Kunstteiche, man-made ponds or lakes. These were created in the steep-sided valleys using dykes or dams, and the water collected stored in order to drive the water wheels in the mines themselves. This energy was used for the pumps, the lifts and other mining equipment, were crucial to the functioning of the mines. There are over 140 dams and Kunstteiche in the Harz, the earliest of which was built around 1546, whilst the last – the wonderfully named “God’s Help Pond” – was built in the 1760s.

The Wiesenbeker Teich then, for all its sense of isolation and wildness once you leave the confines of the campsite, is a mining pond, built in 1722 and held in place by a dam at the end of the lake close to the ruins of the hotel. With the mining industry long gone from these parts, the Kunstteiche have been adapted to that other great industry of the region: tourism. Some are used by angling clubs, or fish farmers who cultivate one of the only surviving crayfish populations on the European mainland, whilst others are the preserve – as with the Wisenbeker Teich – of swimmers, pedalo-pilots, lilo-loungers and arschbombes. However these ponds and lakes were formed, it is hard to imagine this corner of the Harz without them, and they provide us with yet another reminder, should we need it, that often what can appear to be an unspoiled, ‘natural’ landscape laid out before us, actually has a lot to tell us about the social and economic history of a place, and the people who once called it home. 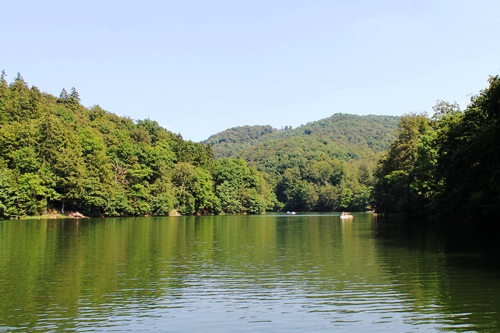 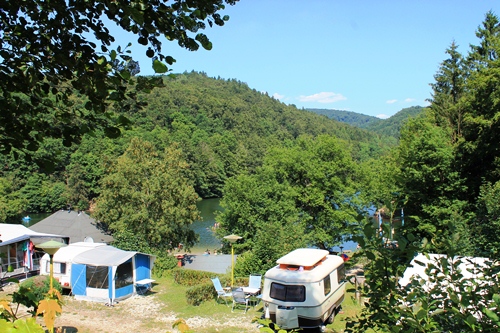 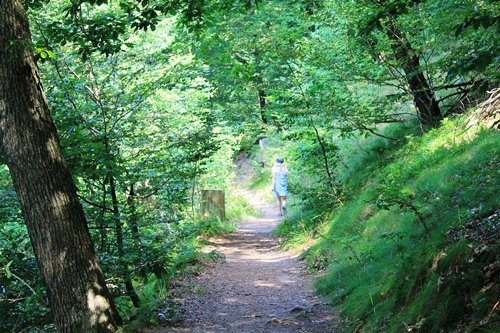