At the harbour at Kladow most of the waterside restaurants and beer gardens were empty, although they were obviously getting ready for the weekend. As the weather gets warmer, this corner of Berlin becomes a popular spot for walking and bike riding on both sides of the Havel, and the next few days would see hundreds of people heading down to the water, but on this Friday afternoon we had the place pretty much to ourselves.

We sat on a bench and looked across to a small island and a colony of cormorants nesting high in the trees. We ate the remains of our sandwiches and sipped at cups of tea. Across the water we could see the Peacock Island and the Wannsee shore. That was where we wanted to be, to find a shady table at the beer garden before catching the S-Bahn home. But first of all we had to get across the water.

Thankfully, Berlin’s public transport system not only offers S-Bahn, U-Bahn, trams and buses, but also a couple of ferries, one of which crosses the Havel once an hour in each direction between Wannsee and Kladow. We could take to the water with nothing more than our usual monthly transport ticket in our pockets, and as we waited for the ferry to dock I wondered why we had never taken this opportunity before in all the years we had lived in Berlin.

Of course, the operators – who work under contract for the transport authority – don’t want to make it too special, as otherwise people would use the ferry as a budget version of the pleasure boats the company also runs. There is no outside seating, and the boat is laid out inside half like a train station bike park and half like the waiting room at the local tax office… but a ferry is a ferry, and it was still something special to get out on the water and to imagine what it must be like for those who have this route as part of their daily routine, crossing the water for work or school, an event as normal as catching the bus or squeezing onto a crowded a U-Bahn.

People like to complain about Berlin’s transport system. Usually they are people who haven’t much experience of mass-transit systems elsewhere in the world. Yes, our trains, trams and buses have their faults, and if you are not buying a monthly ticket it can get pretty expensive. But it is comprehensive and moves you around the city – and across the water – surprisingly quickly. Once in Wannsee we climbed up from the promenade to the beer garden for the first open-air beer of the year, looking back across the water to where we had sat half an hour before with our sandwiches, marvelling at the experience of a boat trip that cost the same a ride on the bus… another of those Berlin moments that remind us why we love to live here. 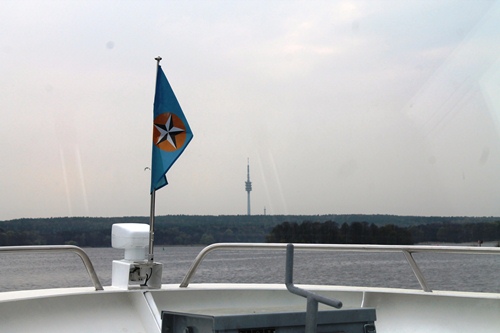 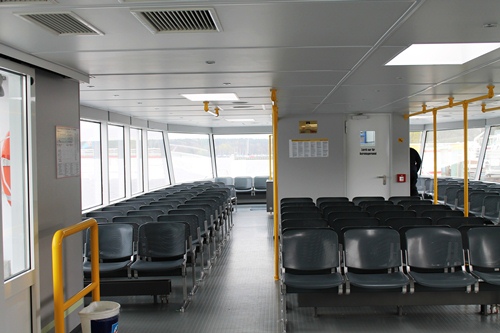 There are three year-round ferries and three seasonal routes operated by the BVG – Berlin’s public transport system – and you can use them with your normal transport ticket. When Digital Cosmonaut took the same ferry route as we did, he certainly had a more atmospheric boat to take him across the water – see some pictures here. On that site you can also learn about one of Berlin’s more quirky public transport stories – the rowboat ferry between Spreewiesen and Rahnsdorf.