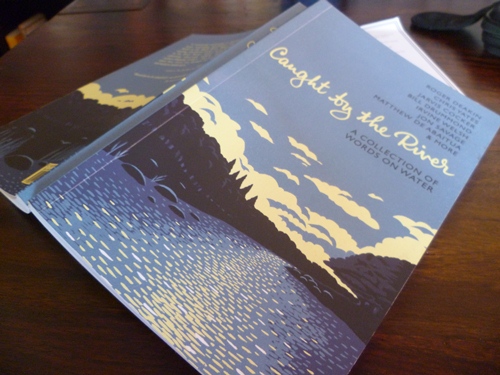 Here on Under a Grey Sky I have often mentioned my admiration for the good folks of Caught by the River, a website that sits firmly at the top of my bookmark lists and was one of the main inspirations for what I wanted to do here. As well as the daily entries on the website, which can be anything from thought-provoking essays, poems, songs, all inspired by the world around us, they have also published a number of different printed works including, in 2009, a “Collection of Words on Water”.

Unfortunately, I had not discovered Caught by the River three years ago, so was very happy to hear earlier this year that they were re-publishing the collection in paperback. A few weeks ago a hand-addressed parcel arrived with the book inside, and the first thing I noticed was of course the wonderful cover artwork by James Lewis. Yeah, yeah, never judge a book… but it has to be said that once I started to read the words inside – all about being on or at the banks of the waterways of the United Kingdom and Ireland – it was clear that the cover was a perfect fit.

The collection has writing by over thirty contributors, and the subject and style of the pieces are varied in style and subject, but always interesting. There are however three that I want to highlight, mainly because they stirred certain feelings of nostalgia and recognition in me, as I read them in a small garden on the German Baltic coast, a fair old way from the settings in the book.

“There is Nothing In The Water” by Frank Cottrell Boyce tells of the freedom of the river, and the need to allow children their moments of independence and adventure, which is something I have been thinking a lot of as I observe my own daughter growing up in the big city and I compare her experiences with my own childhood. “Mersey” by Matthew de Abaitua discusses a place that is close to my imagination – and of Grandparents that I never got to meet – through the writer’s own experiences of discovering the world of work on the banks of that famous river.

And then there is “13” by Laura Barton, triggering a flicker of recognition on the first page when she writes, “We grew up in thrall to the Leeds-Liverpool canal.” I also spent my entire childhood living within a few hundred metres of that particular English waterway, crossing it daily on my way to and from high school, riding my bike along the tow-path, or smuggling beers to more secluded corners before we were old enough to get served at the Ship Inn, right on the canal, where the Rufford branch of the canal strikes north.

The focus of Laura Barton’s “13” is the nearby River Douglas, but I think the reason it struck a chord with me was the pure nostalgia of scenes that I recognised, even if Laura’s experiences were taking place maybe a few miles down the road from my own. She was up on Winter Hill, I was down by the canal:

“We used to drive up here when we were teenagers, just to look down across the county, to look out at the streetlights and the roundabouts, at all the things we were desperate to flee.”

And later, at the Worthington Lakes:

“We called them the “Resies”. Hard ‘s’. It was where people hung out after school. Where they drank cheap cider, kissed with tongues, had sex. It was where boys had fights and girls got love bites.”

As I read “13” I found myself thinking away from the page, of those summer evenings down by the canal, of going up to Winter Hill with some mates from sixth form college when they were able to drive. Of a first girlfriend and the railway stations between Wigan and Burscough, counting them there and back, and of Glastonbury in the sunshine and cider by the station and all those things that you’ll never forget and some that you are embarrassed about and other that you sometimes long for, alone in the kitchen after a drink too many. They might not have been spectacular, like the youthful adventures of the novels that you read or the songs that you heard, but that are your own and that is why they are special.

1 thought on “Words on Water”