“Probably there is no real Paris, except if you have always lived there. For those of us who arrive only to go away, the place teems with ghosts.” – Clive James, A Postcard from Paris, 1980.

This trip to Paris was the first time I visited the French capital. It seems amazing that it took so long to get there. After all, it was always the cheapest flight from England, or a simple train ride from Berlin. We passed through it on our way to Versailles on a French exchange trip but I remember only the traffic beneath my window, the rain on the streets, and the fact that we were not allowed out of the bus. So that doesn’t count.

I always thought that I did not make it to Paris because it was so close. It wasn’t going anywhere and it was always going to be easy to get to so why not try something else? But now I think there was something else at work, namely those ghosts that Clive James was talking about in his article written over thirty years ago, who lived in the pages of some of my favourite books and that had painted a picture of the city that I was convinced the real thing could never live up to. Of the places represented on my bookshelves only New York can probably compete with Paris, and I have never made it there either, and it was this realisation that has made me sure that it was the fear of disillusionment and disappointment that kept me away from these cities for such a long time.

It was clear that the Paris I would experience would have little, if anything, to do with the Paris of James Baldwin and Ernest Hemingway, of Allen Ginsberg and Jean-Paul Sartre. To expect to find their ghosts skulking on Left Bank streets would be an expectation impossible to fulfil. So as we travelled, via Saarbrücken across the frosted landscape I told myself not to expect the Paris of my imagination but to judge the place on its own merits, as it is now. 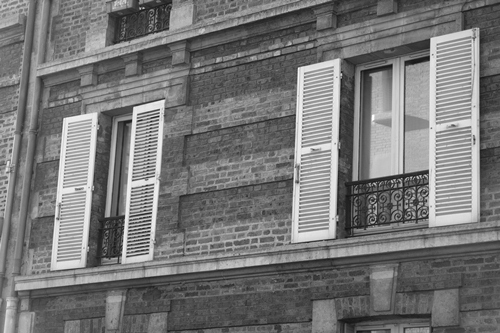 First impressions seemed designed by some twee-vil cooperation between the French Film Marketing Board and the Parisian Tourism Office. We had booked an apartment on Montmartre, a stone’s throw from where Picasso had his studio, on one of those narrow cobbled streets at the top of a staircase, a short walk from the ornate entranceway to the Metro station and past at least one café that would do for a 1920s period piece, a bookshop with a window display of serious-looking books, and a bakery complete with ornate signage and a wicker basket behind the counter filled with irregular baguettes straight out of my school French textbook.

The apartment itself was through a courtyard and up a narrow staircase. We met a lady on the way up who was all charm and smiles, and we felt welcome even though we could not understand a word she was saying. From the window we could see the Eiffel Tower and in the morning the neighbours practised cello before holding a passionate-sounding argument in the stairwell. Yes, any location scout would have rejected the place on grounds of cliché alone, but there you go.

We only had three days, and with a small child in tow we made few plans. We wanted to go to the tower, naturally, and wander along some boulevards looking at grand old buildings. There would be coffee and crepes, and a browse through the dusty shelves of Shakespeare and Company. We would wander through the Latin Quarter and see how revolting are the students outside the Sorbonne, and maybe we would grab a pick-up game of petanque in the Luxembourg gardens. We did all that – except for the last on the grounds of the cold – but mainly we just walked the streets. The narrow alleyways and staircases of Montmartre charmed us. The streets around the university had so many bookshops it was a good job I never paid any attention in those French classes. The grand boulevards were impressive pieces of architecture as theatre but they failed to move me, except in shock at the price of the frocks in the windows… 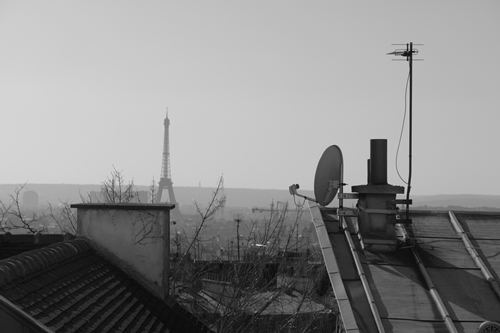 It was all very interesting, and nice, and we found our little spots that are important in making a place feel at home however short your stay, and for the whole time I barely wrote a word in my notebook. Why would I? If I look over my shoulder now from where I am typing this I can see those books, all those hundreds of words, set in Paris across different decades and in different forms and I know that I scribbled little – far less than I did for Saarbrücken – because when it comes to Paris you just get the feeling: what is there left to write?

At Paris Est Station, waiting for the night train in an under-heated fast-food joint I made the first notes that became what you are reading here. Paris was never going to be a place to inspire me creatively. It’s already been done, and oh so many times. But it did get me thinking about our relationship to places that we have experienced only through the written word, or the photography of others, or a film on the screen. If I sensed an atmosphere in Paris, however much I tried to judge it purely on its own merits, it was always going to be flavoured by what was already there in my imagination.

So that little square at the end of our street, where a couple of Spanish tourists posed for pictures by a door through which Picasso almost definitely once walked, means something different because you have that knowledge of the past, and of the ghosts of those who once climbed those steps. The place teems with those ghosts – old Clive got that right – but it is important to remember that those ghosts will depend on each individual, and the collision between the imagination and the reality of the city will be entirely personal. I tried to go to Paris with low expectations. It is a measure of the place, of the city as it is as much as what was already there in my head, that I am already plotting a return. 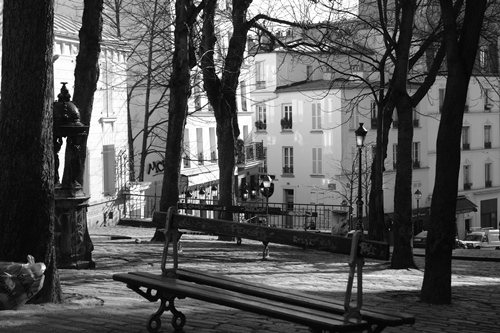 5 thoughts on “Ghosts from my bookshelves: Exploring Paris”