At the bottom of the garden, outside the half-timbered house on the old village lane, the stream rushes over pebbles worn smooth by centuries of continuous flow. From here it enters the woods, cutting deep gorges through the sandstone landscape and flowing beneath frozen ponds until it joins a bigger stream, and then a river, and then finally the Elbe and its long journey to the North Sea, on that short stretch where one bank is Germany and the other is the Czech Republic. This stream at the bottom of the garden does not look up to much, but it explains the village.

Not far from here is an old trade route, for moving salt and grain through the forest between Lausitz, Saxony and Bohemia. Where the old ways crossed the stream, settlements were established. In the village, the business was wood and textiles, and one of the oldest glassworks in Europe, founded in the 14th century. Along the track that followed the path of the stream, houses were built, stretched out in four directions from a central square. Many of the village houses are wooden constructions, dating back to the 1700s. Others are more recent, with the distinctive style of a long lost empire that once stretched from the Balkans to Bohemia. At the start of the twentieth century, over two thousand people called this village home. They worked in the textile industry, and at the glassworks, but next hundred years left their mark. Different flags, different capitals. Ideologies imposed from far beyond the banks of the stream. In the cemetery of the Gothic church, a memorial to the 49 victims of WWI. In the upper village, a memorial to the mass grave of 22 who succumbed to a death march at the end of the next war. Outside the factory, two flags fly. The Czech tricolour and the European stars. The lorries lined up outside a modern-looking warehouse have Danish plates. The population of the village is no longer fixed. It swells and falls, with the season and the days of the week. I wonder what the local phrase for ‘up from Prague’ is, but on a Tuesday morning in February, there’s no-one around to ask.

The main square is at the point where two roads and the stream meet, dominated by an Austro-Hungarian-era village hall and hotel, and the older, Gothic church. This is where the services of the village are congregated. A butchers and a bakers. A themed Western store, where we suppose it is possible to buy leather pants and Stetson hats, Country & Western CDs and Confederate flags, but we never discover the truth of what lies behind the darkened door as it is closed every time we walk past. Rarely closed, in contrast, are the three grocery stores, all staffed by friendly Vietnamese guys who can serve you in Czech, German and English, and whose shelves seemed stocked and ready for the worst calamity the Bohemian forest could visit upon us. Twice, during our stay, a police car idles in the square, motor running for heat as the two occupants look wearily up and down a road infrequently travelled. Not much doing, but you can bet they’ve clocked our number plates. Berliners in town, ‘down from Germany’.

At some point a new road was built between the lower village and the main square, and the older street that ran past our wooden house became a lane and now a walking route, vehicular access restricted to residents, guests and those on legitimate business. A walk home from the square takes us past gardens of all types and stripes, although they all seem to contain dogs of varying moods and expressions of friendliness. Some houses seem abandoned, gardens overgrown, waiting for a young couple from Prague to imagine and then realise their holiday cottage on the edge of the woods. Others are neat, with perfect lawns and cheerful gnomes. In front of a patch of wasteland, by one of the only apartment blocks in the village – three stories high, presumably built during communist times – weather-beaten dolls sit on rusting swings, blowing gently in the breeze, beside a wood pile and the skeletons  of old cars scavenged for parts. The next house along has a new roof and a trampoline in the garden, a well-polished German car (with local plates) parked in the driveway. They make sewing thread in the factory now. The restaurant prides itself in locally sourced, organic produce. Half the houses are weekend retreats, and some of them are listed on AirBnB. It is hard to tell if the glassworks is operational, and the impressive aqueduct that once moved water from here to somewhere important has long run dry. The Bohemian village is both friendly and unsettling, and smells of wood-smoke and the diesel fumes of the long-distance trucks as they rattle down the lane to the new warehouse with the corrugated roof.

Each morning, the fire in the oven has gone out and we need to light it again in order to heat the house. Waiting for it to catch, and looking out through small windows to the frosty lane outside, we see the same neighbour walking his old and tired dog each morning. He wears a hat and a heavy-looking wax jacket, cigarette dangling from his left hand, taking a drag as his dog once again sniffs suspiciously at our car’s front tires. Each morning he passes by, and never once fails to catch my eye as I watch him through the window. I smile but he gives no response. Not until Thursday, close to the end of the week, when there is the slight movement of his head as he blows smoke out through his nose.

The village takes its name from an old Czech word meaning hill, and from the main square way-marked routes lead us past the last of the village houses and across a field, the grass shorn short for the winter. Sunshine has melted the frost and snow from the field, but once the path enters the woods and begins to climb, the scene becomes decidedly more wintery. Storms had blocked us from many of the paths in the nearby National Park, with warning signs at the trailheads making it clear in no uncertain terms that we would be dicing with something dangerous. But not here. Here the path was free, even if strewn with fallen branches and a trunk or two, to be climbed over as we walk ever higher. From the top we look out across the rolling countryside of the Lusatian Mountains and north to the sandstone rock formations on either side of the Czech-German border. Previous visitors to the top had carved their initials into a tree at the highest point. Pavels and Peters. Janas and Olgas. 1976. 1991. 2005. We do not add our own names to the roll-all of summiteers to the hill above the village named for a hill. Only crows, that circle above us as we eat our lunch, will ever know we have been here. 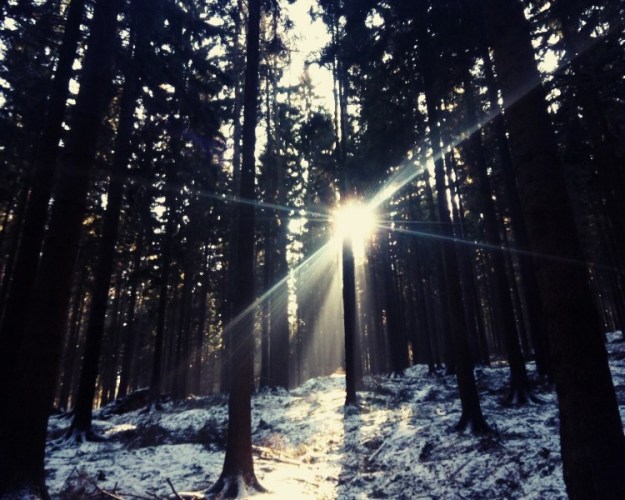 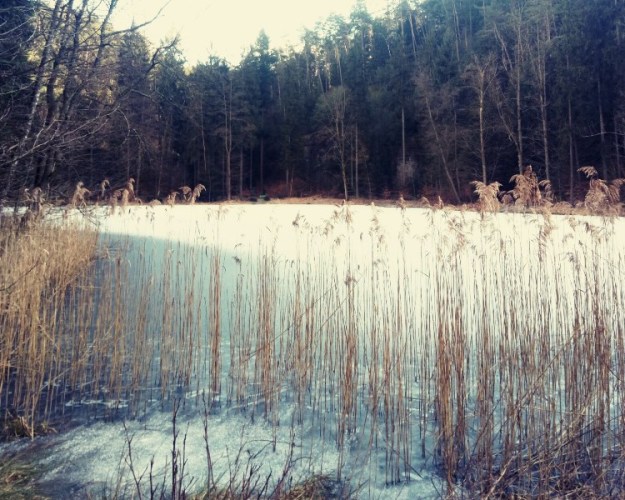 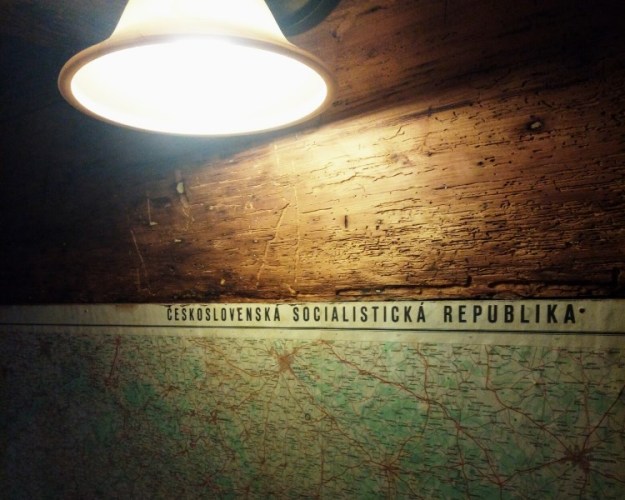