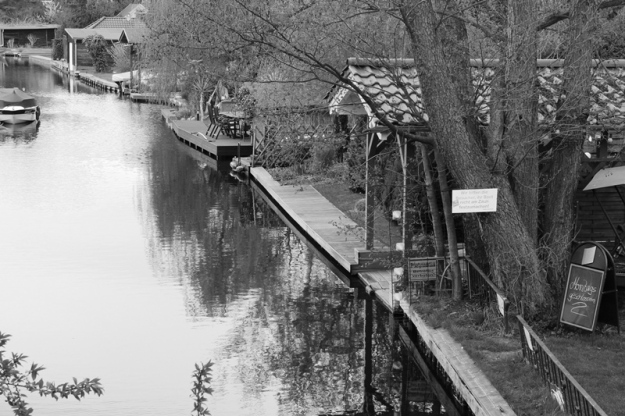 What is it about Venice that draws so many visitors to its islands and canals, that has so many writers and artists searching for inspiration, that captures the imagination of even those who have never been to the city? Jan Morris, who wrote a whole book about the city, described it as “the loveliest city in the world, only asking to be admired.” I am not sure. On my one and only visit I was distinctly underwhelmed. But perhaps I had been expecting too much. The idea of Venice still appeals. A city where the streets are water. A city seemingly floating in the lagoon. And Venice has inspired many imitators. There are New Venices to be found here, there and everywhere. It has been recreated in Las Vegas. It has been recreated, kind of, on the southern fringe of Berlin.

That was where we were headed, to the eastern shore of the Müggelsee where the Müggelspree channel links the lake with the smaller Dämeritzsee and the town of Erkner, just beyond the Berlin city limits. The settlement of Rahnsdorf dates back to the 14th century, and next to the small church there are memorials that tell tale of its history as a fishing village and the disasters and tragedies of the water. Not far from the church were once marshy meadows, that worked as a natural flood basin when the river waters ran too high. In the 1920s and 1930s the meadows were drained and the waters controlled by a series of canals, and along their banks parcels of land were offered up for sale. Neu-Venedig, the New Venice, was born.

We went to Rahnsdorf and Neu-Venedig because, like its big brother, the idea of a village where the streets are made of water is ultimately a fascinating one. In the GDR many of the properties had belonged to important members of the regime, for use on weekends or during long, lazy summer holidays. And part of the settlement remains for weekend or holiday use only, and the owners are not allowed to register their main address there as it is still designated as an emergency overflow should Berlin be threatened by high waters. Thankfully the last time this happened was back in 1947 when the houses and gardens were indeed flooded and the streets were all that remained high and dry.

From the village church at Rahsdorf we made our way through suburban streets, past a riding school, until we found a hand-painted map that showed us the network of canals that make up Neu-Venedig. Although it was indeed an attractive place, and it was easy to see why people have chosen it for over 80 years as somewhere to escape from the stresses of everyday life, ultimately our quest to get to the heart of Neu-Venedig was unsuccessful. We walked along the dusty streets, nosing into well-tended gardens and at the various different houses they belong to. We crossed bridges and had a glimpse down to the waterways that those houses face, and the jetties and the boathouses. We reached dead-ends and had to retrace steps; the best reminder that Neu-Venedig was not planned for those on foot, or indeed on land. We could walk through the geographic centre of the settlement and yet we would always be on the edge.

No, if we wanted to see the neighbourhood as it was imagined in the 1920s we would have to take to the water. And we didn’t have a boat.