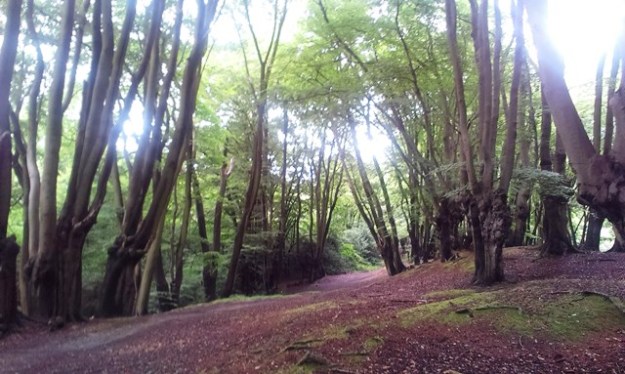 The underpass beneath the tracks at Buckhurst Hill tube station had that smell, that mix of urine and rain and absence of natural light, and so I quickened my step. I was running, not from anything in particular but because this is what I do most mornings and just because I was in Essex I saw no reason to change my habits. On the ramp up, back to fresh air, my footsteps startled an Arsenal fan, dressed for the match and on his way into town.

I had no real plan of where I was going to run, except a quick look at Google Maps offered up a green space on the other side of the railway from where we were staying. Lord’s Bushes and Knighton Wood. From the tube station I picked my way through residential streets until I came to a road called Forest Edge, and began to look for a way in. Forest Edge, because this collection of trees surrounded by the suburban streets of Buckhurst Hill and the north end of Woodford belong to Epping Forest, that ancient woodland that stretches from Forest Gate, not far from Stratford and the extravagant and impressive folly of the Olympic Park in the south, to Epping in the north.

And when I found my way in, taking a route along Monkham’s Lane – a forest track that my map would later suggest was the dividing line between Lord’s Bushes and Knighton Wood – it certainly felt like a place both ancient and permanent. It also, as I passed a couple of abandoned cars at the forest entrance, felt like I was in a scene at the start of Crimewatch. Was I to be that hapless jogger, stumbling upon something unfortunate? So it was with a slight feeling of unease that I followed the trail through the trees, watching out for roots and dogs, pausing only to marvel at the 400 year-old Pulpit Oak that marks the boundary between the London Borough of Redbridge and the Epping Forest District Council. If only all boundary markers could be so impressive. And as my unease subsided, I marvelled at this place in the heart of an otherwise suburban landscape.

We left the mud splattered trainers at Buckhurst Hill and drove north, through Loughton and into what felt like the forest proper. The legend said that this was where Dick Turpin had a hideout. In the outlaw spirit, a local pub was named for Robin Hood. And the news, a few weeks after our visit, that another body had been found in Epping Forest to add to the many listed on the areas Wikipedia page, suggested my unease earlier that morning had not been so wide of the mark: “The forest,” some anonymous contributor had typed, “has long standing criminal associations.”

Once a Royal Hunting Ground, Epping Forest came under the control of the City of London in 1878 and remains so this day. We were aiming for the Visitor’s Centre at High Beach and a walk down through Little Monk Wood to Loughton Camp, an Iron Age Hill fort that provides evidence of human habitation of Epping Forest for over two and a half thousand years. From the Visitor’s Centre the walk along well-managed paths was peaceful, with only a couple of other waterproofed and rustling wanderers appearing from time to time through the trees. We passed more ancient trees and the ferns that covered the forest floor, paused for tangy snacks from the blackberry bushes and enjoyed the change from the forest scenery that came as we reached wildflower-filled clearings. As the paths rose and fell it was easy to see why the mountain bikers of the capital are drawn here to bomb through the trees.

Without disturbing the old hillfort we circled Loughton Camp and then began the climb once more to High Beach. There, at the car park, the forest had cleared enough to offer a striking view across the countryside to the north-west. Somewhere down there in the Lea Valley beneath the forest, were golf courses and riding stables, the streaming traffic of the M25 and  the monster logistics of the Sainsbury’s distribution centre. But from up on High Beach it all just looked like rolling green. Heading back to Buckhurst Hill via the Robin Hood roundabout, we spotted many more entry points to Epping Forest, more uneven car parks and lonely bus stops from which to launch further explorations. It was clear, then, that we would have to return. 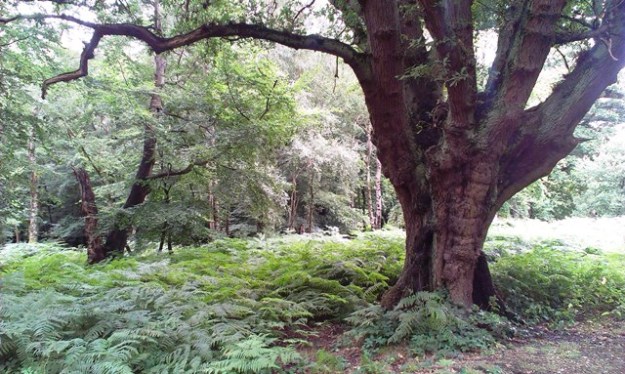