Every year we watch the marathon in Berlin, heading down to Unter den Linden to stand in the shadow of the Russian Embassy to watch the runners as they turn the final corner and can see the Brandenburg Gate for the first time. They are about a kilometre from home, and it can be pretty emotional to watch their reactions. This year we had a friend running – Rebecca – who I have known since primary school when we used to go to their house once a week and they came to ours the other, and we played spy games in the garden and her older brother Ben stole my Cadbury’s Cream Egg. Not that I am still bitter about it… anyway, where was I?

Oh yes, Rebecca. It was thanks to Rebecca that I first stayed at the Circus Hostel when I visited Berlin in October 2001, and therefore it is thanks to her for pretty much all my friends in Berlin, Katrin and Lotte, and everything else that has happened to me since. So it seemed only fair that if she was returning to the city to run her first marathon that we spent the day dressed up in t-shirts with her bib number of the back and caught U-Bahn after U-Bahn to cheer her on around the course. She did remarkably well, and it was very inspiring to watch her run, and made me think about my own running… a process that begin about three years ago with a new pair of shoes and a first difficult walk-run three kilometres through my home neighbourhood of Berlin-Wedding.

Last year, watching the marathon, I was inspired to run the Berlin Half, which I did with a number of friends in March. And in a couple of weeks I will be running the same distance in Dresden. As yet I have resisted the temptation to attempt the whole 26.2 miles … but for me starting to run and making it a regular part of my life over the past couple of years has been a wholly positive experience. The races have been fun, especially when done with friends – bringing something of the camaraderie of team sports to what can be quite a lonely pursuit – but beyond that it has been the running in unfamiliar surroundings that has not only been a joy, but has certainly added something to my travels.

Running across the drained Oder Valley to the Polish border, or around the Imperial Palace grounds in Tokyo, are two memories that will remain for a long time. As will the group run across the familiar Rhoscolyn headland, experiencing one of my favourite and most familiar walks in a slightly different way. This summer I ran along a river in Freiburg, skirted hills in the Black Forest, and struggled up a forest track in the Harz Mountains, believing the top to be just around the next corner… it never was. And in Berlin it has taken me to corners of the city I have never been to before, from the Teltow Canal in the south east to a run home alongside the lake, canal and river of northern Berlin from Tegel. On the day Germany won the World Cup, Jared, Sean and I prepared by running a loop through the Treptower Park and down past an abandoned theme park before finishing in a beer garden complete with elderly, dancing couples. And one day in spring I took the S-Bahn out of the city and ran home along the Panke river, past the old villas of Communist leaders, allotment gardens and motorways, through the palace gardens of a long destroyed palace, and across the old dividing line that is the Berlin Wall Trail.

So thanks Rebecca and all the marathon runners for continuing to inspire… we ended up once more in the shadow of the Russian Embassy, and when she turned that corner right on schedule we were all incredibly proud. I still think you are all a little crazy though… 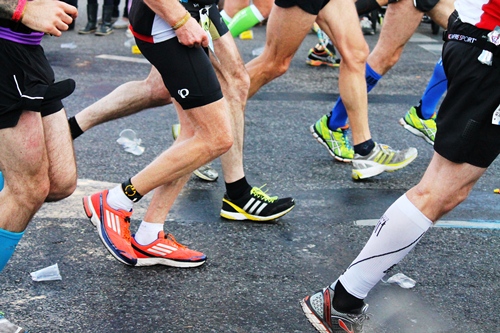 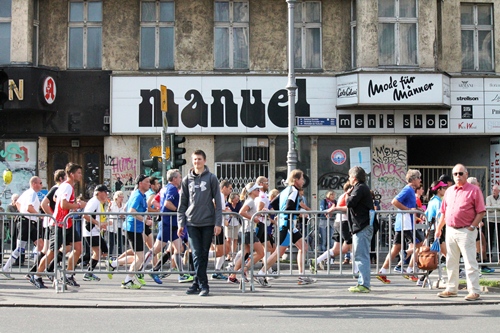 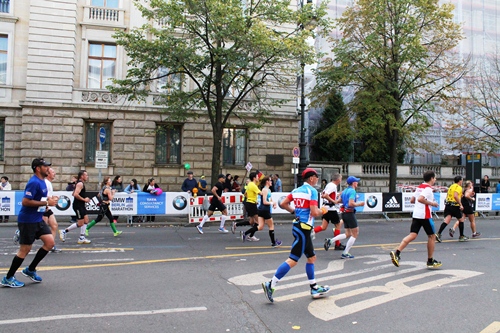