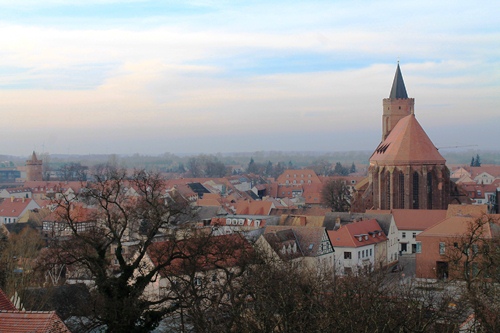 It is a holiday in Beeskow, a small town on the river Spree about an hour and a half drive from Berlin. Not long after Christmas and the town feels like it is indulging in a collective hangover; there is barely a soul to be seen, and as we walk through the cobbled streets of the Altstadt the only people we come across are a group of men, a little worse for wear on beer and schnapps, who are making their way to a smoky bar down on the embankment. But before we come across them – filled as they are with alcohol-fuelled bonhomie – we have walked through the picturesque market square, complete with town hall and the odd half-timbered house. Even the buildings that date back to the German Democratic Republic and beyond have been built to fit with the ensemble, and it is easy to imagine it cheerful and bustling on an early summer market day, the outdoor seating of the cafes and restaurants spreading out across the cobblestones.

For now, in the heart of winter, we have it to ourselves. We are walking through the towm with no aim in mind except fresh air, searching out the old city walls as a guiding line for our stroll, but soon we fall back into family history. Just over there, in a shop that is now an estate agents, was the spot where the Christmas pyramid was bought at the end of the 1970s. It still graces the family table, the woman with a hat and an umbrella chasing the steam train in a never ending circle fuelled by candle power. Or perhaps it is the other way around… whether the woman is chasing a missed train, or the train is chasing her, is a continuing family debate. There are more family stories, of power tools bought as birthday presents, and other shopping trips from the little country village where the (then) small family began its life together.

It is strange to think about it. Three decades have passed. The country that this then was no longer exists. The family is much larger now. We follow the city walls, past tiny houses built into the structure, many belonging to craftsmen – shoemakers, mechanics, carpenters – and their signs are rocking gently in the cold breeze. I cannot ask Katrin what she remembers of Beeskow, because she was not there. The family had moved away, to the Baltic coast, before she arrived.

We walk on, to the castle down by the river, the main tourist attraction of the town. There has been a castle on this site since the middle ages, later ruled from a distance from the Saxon city of Meissen, before the influence of Czech kings and eventually rule by the Prussians. It is a fine old thing, the castle, with a view across the Spree river and the surrounding countryside, but at this time of year we have it to ourselves, searching out the light switches as we climb to the lookout point. But as you look down across the town you can begin to see which of the buildings do not have origins beyond the battles of the Second World War, and you realise once again that even out in the countryside the German towns and villages were not spared the wrath of the advancing Red Army. Much of Beeskow was destroyed by Soviet artillery fire, and not rebuilt until the 1960s… but enough of it survived to keep its character alive – one of the historic centres of the state of Brandenburg – which should be hopefully enough to attract a tourist euro or two.

From the top of the tower we can also see further legacies of the GDR period, from the industrial complexes on the edge of town still working away on this winter day to the block-like prefabricated Plattenbau apartment blocks. Somehow it makes the town more real, and even adds to the charm of this pleasant town on the river, a town that was built on farming and salt production, a town that continues to work with wood, with metal, with chemicals, and a town that has its moments, softly remembered, in our family history. We climb down from the tower to get something to eat at a restaurant on the water, the fisherman resting on the frosted embankment. Beeskow, Brandenburg, in the winter. It is time, once more, to leave. 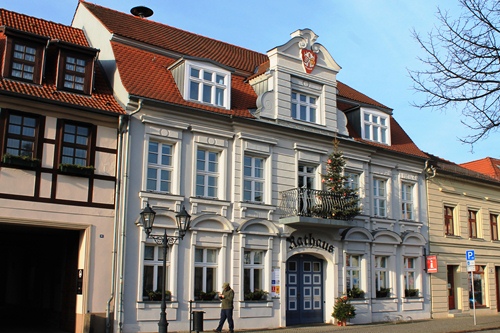 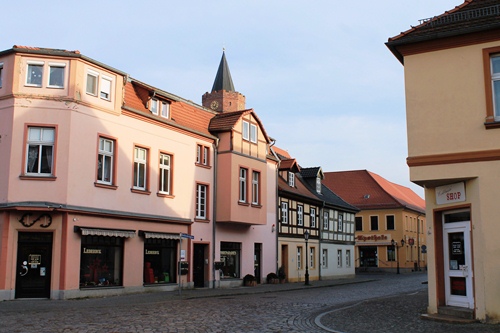 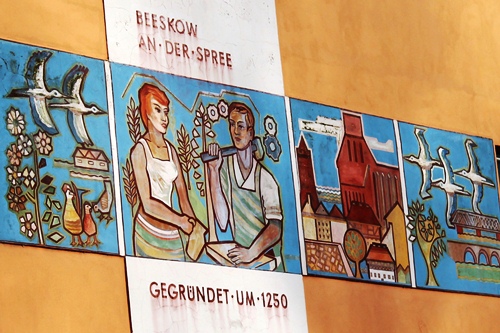 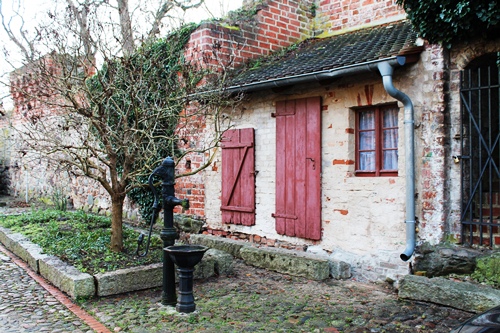 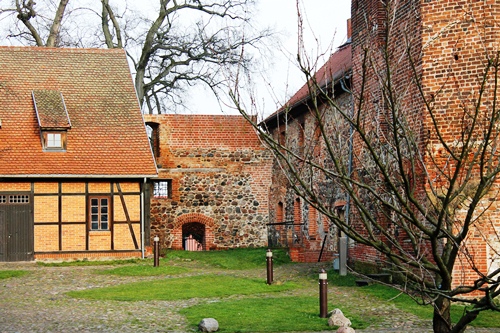 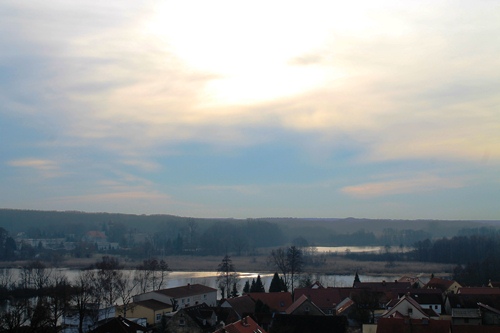 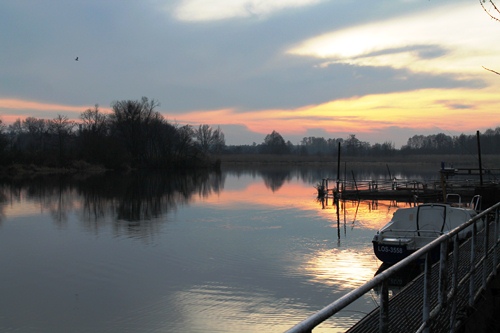 1 thought on “A winter’s day in Beeskow, Brandenburg”