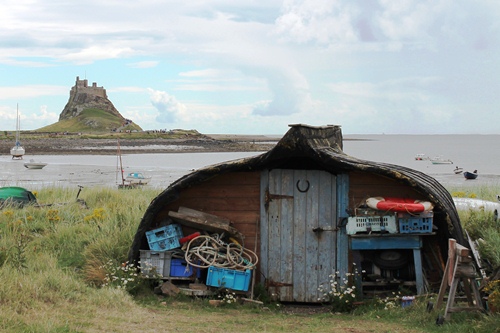 Just outside the Priory museum on Lindisfarne, there is a plaque dedicated to the lifeboat teams of the island and their rescues. The first recorded was in 1867, by the lifeboat Grace Darling – a name we will hear time and again during our trip to Northumbria – and the rescue of four lives from the fishing coble of Holy Island on April 29th. The final rescue, before the lifeboats of Holy Island were withdrawn from service, was in 1954 by the Gertrude, with 11 lives saved. On the day we visited in August it was drizzly but the seas were calm… however, looking out across the North Sea from the lookout tower along the coast south to Bamburgh, and the Farne Island lying low offshore, it was not difficult to imagine the sea violent and transformed, crashing boats against the rocks and then the bravery of those lifeboat teams as they pushed themselves out into the squall.

There are more memorials, from the gravestones of the churchyard to the solemn granite column dedicated to those of the island who gave their lives in the two World Wars, and whose names look down on both the village and the bay, where seals pop their heads out above the waves. From the cliff above the Priory we can see across the harbor to the footpath leading up to the castle, standing high on its rock like something out of a particularly fanciful film. Along the path walk a trail of people, making steady progress past the ice cream and chip vans.

We drop down past the harbor, where upturned boats have been converted into storage sheds, and join the throng. We hear German and French, plus some languages we cannot decipher.  For centuries people have been making a pilgrimage to Lindisfarne, walking across the sands at low tide to this cradle of English Christianity, and still they come, only now they are more likely to drive the causeway than brave the sands, and come armed with a National Trust membership card rather than a battered copy of the Bible.

At the foot of the castle we duck out and walk around towards the sea, and now we have the place pretty much to ourselves. A couple of others have also broken free from the stream heading to and from the castle, and we explore the foot of the walls and the old lime kilns, picking our way across the headland for a view of the North Sea. Now it was possible to imagine the desolate beauty that must be available on a Tuesday morning in February, when the seas are angrier and the winds more violent, and we make loose promises to return. But ever since we parked up on the edge of the village we have been conscious of the time. We want to get back across the causeway to the mainland before the tide rolls in and strands us on Lindisfarne for five hours or more. So we head back to the track and push for home.

On the drive it is clear that we have been perhaps a little too cautious. The tide appears to be at its  lowest, and it is clear that any pilgrims following the line of tall poles across the sands would barely get their feet wet. Between the track and the road a good number of people are out on the sands, chucking driftwood for the dog or flying their kites where there is no danger of overhead electrocution. It is still a strange feeling to drive where you know the water’s will soon come, and the special shelter built on stilts for the unlucky few that get themselves caught is actually not very reassuring. It is with relief – perhaps not admitted – that the car takes the rise at the end of the causeway and onto the mainland, and we pause for a second to look back across the damp sands to what must be one of the most iconic and oft-recreated views of northern England and yet no less impressive for all that. I am not a religious person, but I can understand why this became a place of sanctuary and pilgrimage, and despite my unease I find myself wishing to walk that trail across the seabed for myself. Maybe next time… 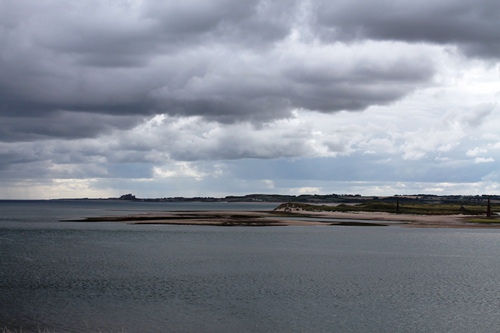 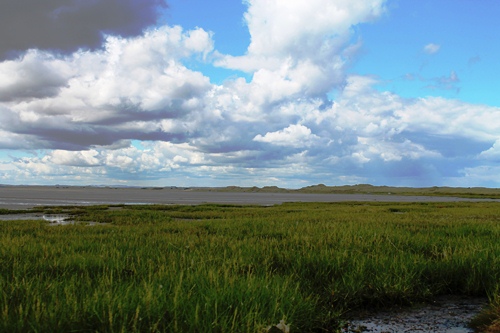