We want to get home, to our attic apartment and the Christmas tree, but as we leave our friends’ house in Leipzig the snow that has been falling since early morning is coming down ever heavier, and at the tram stop the electronic board keeps shifting, first five minutes, then six, then four, then six again, and it is only when we see two headlights appear through the near-blizzard that we are sure we will even make it to the train station. The tram itself is packed and steaming, a wet dog smell and slush rapidly melting at our feet, and it creeps forward through a city where visibility is down to a couple of metres. Finally the station appears, looming above us, and we brave the crowds and the gathering of smokers who stand, huddled around the warmth of their glowing cigarette tips, towards the platforms and the slow train north to Berlin.

Even before we leave Leipzig we are delayed, but it doesn’t really matter. We have chosen the slow route anyway, so an extra ten or fifteen minutes are of little consequence. Outside the grimy window the snow is piling up, at the red-brick stations where the clocks are long stopped and no-one gets on or off it is impossible to see where the platform ends and the embankment begins, and it collects on the rust-red wagons of goods trains parked up in a siding. As we move through the countryside towns appear suddenly, like ghostly visions, if they appear at all: at one stop we are left only with an old abandoned warehouse, the graffiti warning us that we are in the territory of the “Hools” of Lokomotive Leipzig, and the town itself is lost, somewhere beyond, obscured by the weather.

If there is a long enough gap between stops the train picks up speed, rattling along through the blanketed landscape. Forests appear out of the gloom, suddenly running alongside the train tracks for a while before falling away again, first to the end of a ploughed field where narrow peaks of frozen soil poke out above the snow-filled furrows, and then the trees are gone completely, only to re-appear on the other side of the tracks, on the other side of the train.

We pass a country road, melded by the snow with its surroundings and un-driven since the fall. Only the neat avenue of trees, so common in this part of the world, give its location away. That and the road sign, which offers up permission for an impossible eighty kilometres per hour, at least in these conditions. We look out of the window even though there is nothing really to see, just the same scene repeating as we move through Saxony towards Brandenburg. Forests, fields and farmhouses in their frozen, winter’s dress, again and again and again, and yet the view through the window is so captivating you have no wish to look away. 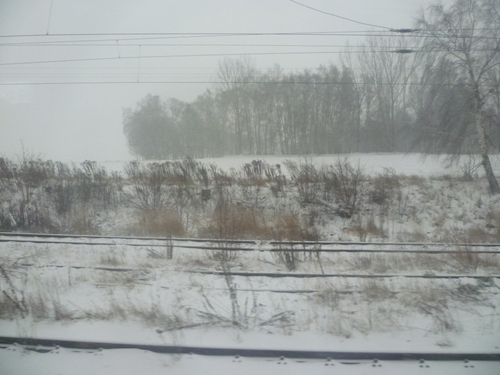 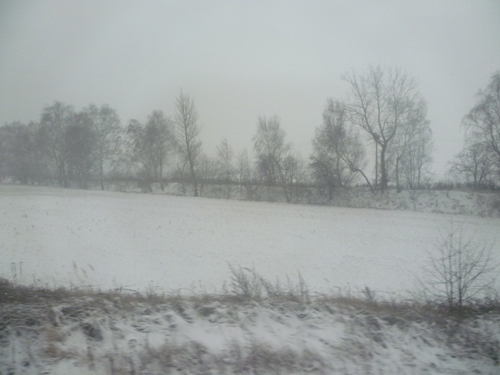 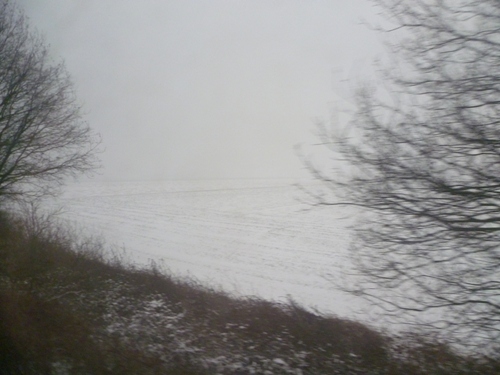 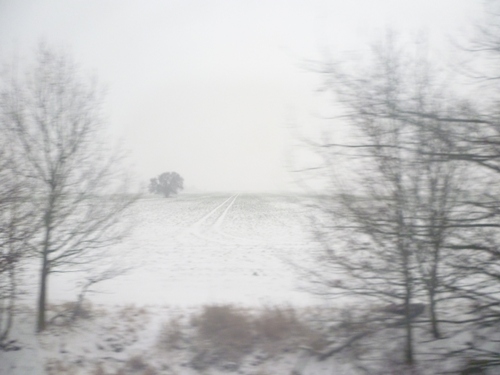