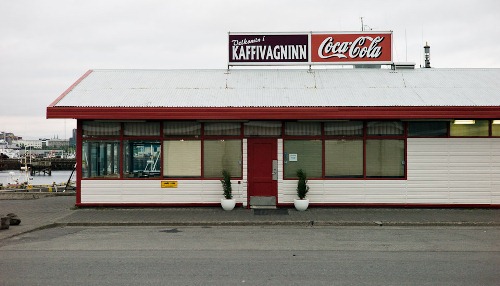 Sonic Iceland is the story of a journey by Marcel Krüger and Kai Müller to discover the music of a country. They collected interviews, pictures and notebooks filled with texts, which became the basis for a website and what will be a book. Here is Chapter 0 – the short introduction for how the idea for Sonic Iceland was conceived.

It’s a cold and miserable winter morning in Cologne, and I am grumpy. It is the day after Boxing Day 2009, and in recent years Christmas has not been a good time for me, so I don’t feel very motivated as I walk up the stairs of the subway station in Ehrenfeld and towards the Weltempfänger-Café. I’m supposed to meet my friend and former housemate Kai, who is planning to visit Iceland. He wants to create some kind of documentary about Icelandic music, and has asked me to join his project. I have no idea of what this whole thing is going to look like, but besides my holiday-grumpiness I’m stoked about the idea of combining a visit to one of my favourite travel destinations with good music. I enter the café, and as I see Kai, beaming and sitting beneath a large map of the world, my mood lifts even higher. After a short shake-hands and catch-up (he lives in Cologne and I in Ireland), we set to work.

Kai and I have been fascinated by Icelandic music for a long time. It was always surprising how many different sounds and styles such a tiny nation produces, compared to Germany, for example. Plus we have watched the “Heima”-movie of Sigur Rós once too often. So the idea for Sonic Iceland was born: to go and talk to the Icelandic musicians in their natural habitat, record the interviews and document this with pictures and text. We set up a blog and started talking to people to help us get to Iceland.

Fast forward: April 2010, and Kai is back from the Aldrei fór ég suður festival in Northern Iceland. Aldrei fór ég suður translates as “I never went south” and is a music festival in the small town of Ísafjörður, organised by singer/songwriter and local hero Mugison. Besides a truckload of pictures, the one thing Kai brought back is a contagious enthusiasm. His stories of a moustache contest, a snow festival in a blizzard, eating seal and drinking Brennivín, seeing an almost frozen waterfall and not sleeping for 4 days made me want to board the next available plane and fly to Reykjavík straight away. He also reports of a well-organised press trip and friendly, good-looking and hard-drinking locals. It seemed Sonic Iceland would take off easily.

July 2010. We’re back from Iceland and completely exhausted. It has been harder to get to Iceland then expected after Kai’s first trip in April. We ran into many many walls, and not having a big magazine or company back us up made it all even more complicated. However we made it to Iceland and back with the help of mostly Icelandic partners, and through an online fund-raiser where generous supporters from all over the world helped us out. We talked to loads of Icelanders, drank more Brennivín than expected and Kai took over 5000 pictures. We even managed to document the whole thing in real-time on our blog.

As I’m writing this, another Christmas has passed, and it’s exactly half a year after we both left Iceland. Preparing and sorting and finalising all our stuff took way longer than expected – we had naively aimed to have our website finished by August 2010, but it is finally ready in January 2011. Was Iceland like I expected it? Landscape-wise, yes. I live on a volcanic island myself, so I was not as stunned as Kai by all the lava-fields and bleak mountains. However then we got so immersed with all the Icelanders we met, and they showed an acceptance towards us that normally takes months and months to develop. I never had the feeling of advent as strong as I had in Reykjavík. When you are on holidays, you sometimes perceive your destination as something that is just sitting there to give you a good time with beautiful beaches and wild clubs, but it leaves no impression when you depart, as you’ve never even arrived there. With Iceland and especially Reykjavík, this was different. I miss it, but not as you miss that beautiful beach resort in Thailand that gave you a good time. I miss it because it gave me a feeling of home.

Here’s the story of our trip. We hope you enjoy it.

2 thoughts on “Sonic Iceland: The end is the beginning is the end”