It is the first fine weekend of the year, and it feels as if the streets and the transport system are being over-run by the crazies and the daytime drinkers who have been – where? – throughout the winter but have re-emerged into the beautiful sunshine that makes Berlin and Berliners (a grey city with gruff locals) threaten to even smile at one another and share a kind word.

The first few sunny days of the year are always slightly disconcerting, as if everyone has forgotten how to deal with the freedom of walking the uneven pavements without the restriction of heavy coats, hats and gloves, or the freedom to sit at outside tables or take a blanket to the park… it is not that those people on the U-Bahn are really crazy, or that the daytime drinkers are going to necessarily make a habit of it, it is just the excitement of spring. Everyone is simply a little giddy.

And what do you do when you are giddy with the joys of spring? Why yes, you go to Hohenschönhausen. This eastern neighbourhood may have a certain reputation with Berliners, probably due to the Stasi prison complex and the massed ranks of GDR-era Plattenbau housing blocks, but there are few more pleasant corners of this city on a mild spring day than the streets between the Konrad-Wold-Straße and the two nearby lakes, the Orankesee and the Obersee.

We chose the Obersee, making our way around the opposite bank from the Wasserturm, which is one of the landmarks of the neighbourhood – if that is not too grand a term. The other is the Mies van der Rohe house, compact between some very lovely looking houses, with a garden in front of the lake. This was the only private house designed by the legendary architect that was ever built, although thankfully it is possible to nose inside as it is now an exhibition space that is open to the public.

We did not go in – the weather was too fine – and so we picked our way along the narrow path between the water and the fenced off villa gardens, stepping over fishing rods and canoodling couples  before navigating our way through the residential streets towards the next tram stop. It was a taste of the summer, of how Berlin weekends can be when the weather is fine, of what we have to look forward to… no wonder people get giddy. 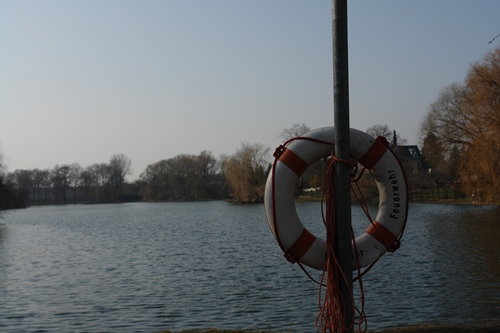