“Mountain air and winter sun, chestnut trees and almond blossom, whitewashed village houses and reflective surfaces in the distance that may be the sea but could also be those plastic greenhouses that own the coast towards Almeria…” These are some of the scribbles in my notebook from the times we have been in the Alpujarras, these valleys only a short drive from Granada or the Mediterranean coast, and the words on the page fill me with dreams of escape and have me checking the cost of flights to Malaga.

The Alpujarras are surrounded on four sides, by the Sierra Nevada mountains and a series of lower hill ranges, which gives you the definite feeling of being cut off and isolated from the rest of the world. It is a peaceful place in the shadow of snow-capped mountains, with deep gorges and whitewashed villages clinging to the hillsides, and terraces dug into the slopes, fertilised by an irrigation system that dates back to Moorish times. Hiking trails meander through forests of chestnut and oak, or along mountain streams, up beyond the tree line to the alpine meadows of the high plateau. The eastern Alpujarras are as arid and barren as you would expect for a place in the south of Spain with Morocco clearly visible on the horizon, but head west and you leave the badlands behind, exchanging them for fertile valleys that produce oranges, bananas, lemons and avocadoes, as well as apple orchards and olive groves.

The area was first settled by Berbers from Seville back in the twelfth century, and the style of building – whilst unique in Spain – remains strikingly similar to the villages of the Rif Mountains across the Straights of Gibraltar in Morocco. As Christian forces began to reclaim Iberia from Islam, the Alpujarras became the Moors last stand, and indeed even after the final expulsion, two families were required to remain in each village in order to maintain the complex irrigation systems that are still used to this day. Traditionally the Alpujarras has been a backwater, even during the turmoil of the Spanish Civil War, and by the 1980s it was the poorest region in Spain with almost third world levels of illiteracy. In recent years the depopulation of local youngsters to the cities and the coasts has been somewhat balanced by an influx of north European expats, and tourism has also helped bring money to the region as visitors come for the hiking, biking and birdwatching, or to just breath in the clear mountain air and escape from the heat of the coast.

One of the region’s most famous expats was Gerald Brenan, a writer who moved to an Alpujarran village back in the 1920s, when the only way to access the valleys was by foot or on the back of a mule. His book ‘South from Granada’ is a wonderful portrait of the region, as well as being an inspiration for many of the British, German and Dutch folks that have followed in his footsteps. The Alpujarras attracts an alternative crowd, of new-agers who sleep in the tepee village just outside Orgiva, and any number of artists whose paintings, photography and crafts are on sale throughout the region. 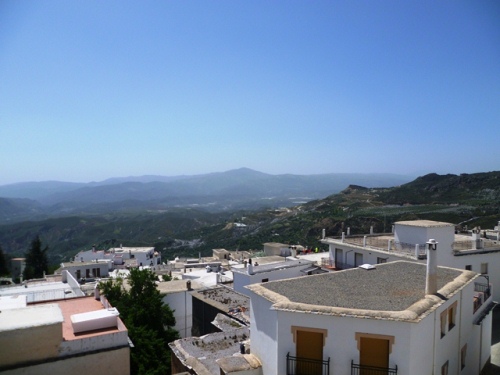 But it is not purely a refuge for expats, as the terraces cut into the hillside above the villages are still farmed, the white vans bumping up the farm tracks each morning and down again in the evening after a day’s work in the fields has been done.  Despite the modern communications and the new roads that provide ever quicker access to the outside world, the Alpujarras still feels like a place apart, a refuge or a hiding place in the shadow of the mountains where the air is cool even when the coast bakes, where on a good day you can look out across the deep gorges and soft, olive-tree-speckled hillsides on the other side of the valley and see all the way to Africa.

We always stay with family when we visit, but we can most definitely recommend the hospitality of our friends at the Hotel Berchules…make sure you ask them about their “walks menu” for exploring the area on foot.