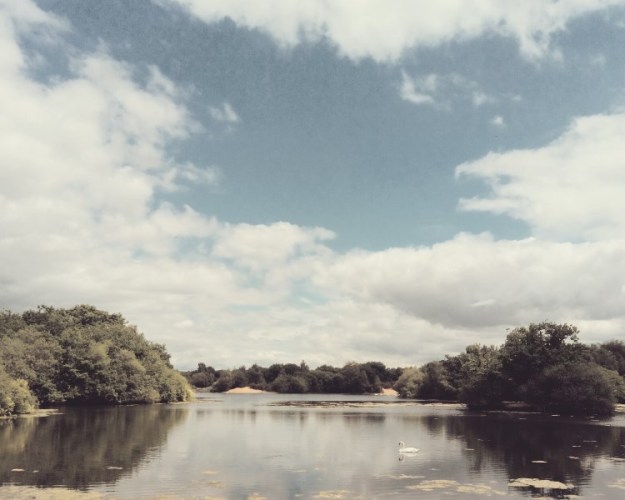 From a house in Leytonstone we walked through quiet residential streets until they gave way to an open patch of grassy land, leading down to a beach where ducks and geese gathered on the edge of a small lake. It was a warm Saturday morning in June, but apart from birdlife there was nothing on the water. Perhaps it was too early for the inexpert rowers to head out from the little wooden boathouse to explore the Hollow Ponds, these former Victorian gravel pits that had been dug out further by unemployed men in 1905 to create a boating lake speckled with islands, and a small part of the ancient Epping Forest that stretches out on either side of the boundary between London and Essex.

In Will Ashon’s fascinating book about Epping Forest, Strange Labyrinth, the chapter on the Hollow Ponds reflects on the fact that they had not only inspired “a rather sappy song” by Damon Albarn but also some of the other activities beyond boating on the lake that the area is known for:

My sister-in-law told me similar tales, suggesting that they were obviously well written into local legend, as we followed the path through the bushes around the far end of the lake. On that morning, our company in the woods was a mix of joggers and weekend strollers, a cheerful man shadow-boxing in a clearing by a fallen tree, and the odd dog walker being led through the trees. Ashon, in the chapter on the Hollow Ponds, goes on to tell the story of a dismembered body being found in a blue IKEA bag not far from where we had been walking only a couple of years ago. Jogging and dog walking. Sex and murder. The tales of the Hollow Ponds. The stories of Epping Forest.

Everywhere has its stories of course, but there seems to be something about Epping Forest that means it contains more than most; that between the trees was a good hiding place or sanctuary for the weird and the wonderful as well as the dark and ominous. Strange Labyrinth is subtitled Outlaws, Poets, Mystics, Murderers and a Coward in London’s Great Forest, and there does seem to be something about this ancient woodland that attracts a cast of strange characters and outlandish legends that Ashon introduces us to in his fractured (like Epping Forest itself) and meandering (like any good forest walk) exploration of the place contained within the pages of his book. To call the book fractured and meandering isn’t meant as a criticism: I enjoyed getting lost in it.

I was also interested in a recurring theme contained in the book which is the subject of land and who owns it, perhaps all the more urgent in a place like this because of Epping Forest’s status as belonging to the people following a dedication by Queen Victoria in 1882 of the forest for “the use and enjoyment of my people for all time”. This happened, however, after the period of Enclosure that saw the massive privatisation of public land throughout the country in the 18th century. The story of Enclosure not only shaped the ownership of the land in and around the forest, but also the city that was rapidly growing to the south. Enclosure resulted in increased agricultural yields increased and created a landless working class, who could now provide labour for the factories and workshops of the Industrial Revolution. It was one of the most important social, political and economic developments in the history of the country, and if I remember rightly, it occupied one double lesson in my GCSE History syllabus. Reading the section on Enclosure in Strange Labyrinth was a reminder that this is a story so often untold or under-told, and therefore unknown by many.

As London stretched out to surround much of the south of Epping Forest, the debate and discussion about land and ownership would continue. The M11 link road protests of the 1990s, especially on and around Claremont Road in Leyton – not far from the Hollow Ponds – would be one of the defining battles over land use of the late 20th century and would be part of the birth of the Reclaim the Streets movement. These discussions have continued, in London and elsewhere, whether over across to the Thames embankment or the legacy of the 2012 Olympic Games in Stratford and the surrounding area, and are tied to issues relating to the environment, housing, privatisation and the role of the state and public ownership, that are some of the most important of our time.

Back at the Hollow Ponds, our own meandering path took us to the boathouse where a young couple were readying themselves to cast off. She seemed sceptical about the whole endeavour, while he gripped the oars with a grim determination. I wondered what they would come to think of when they thought about Hollow Ponds; whether what was about to transpire would become a fond memory or a painful recollection. Reading Strange Labyrinth had not only given me lots to think about relating to Epping Forest and elsewhere, but it had also helped feed the imagination. It was impossible, once you knew some of the stories, to see the Hollow Ponds as simply a pleasant boating lake. The power of the strange labyrinth that is Epping Forest appears to be that once you know the tales of the past, you cannot help but write new ones in your head. I’m sure the couple in the boat were fine.

Will Ashon’s Strange Labyrinth: Outlaws, Poets, Mystics, Murderers and a Coward in London’s Great Forest is published by Granta.

1 thought on “Hollow Ponds and the Strange Labyrinth”