It is strange to visit a place that has already appeared on your own website to which you have never seen with your own eyes before. Katrin visited Leipzig’s Monument to the Battle of the Nations (Völkerschlachtdenkmal in German) a couple of years ago and wrote this post for Under a Grey Sky. But even her pictures could not do justice to the looming scale of the thing, as we arrived to face it on Saturday afternoon as I registered for the Leipzig Half Marathon that was taking place the following morning.

Before we got there, I was wondering what my feelings would be when I came face to face with this looming presence. Monuments built to commemorate battles, especially when triumphalist in conception and execution, always make me a little uneasy. The monument was built in 1913, but the battle itself was 100 years earlier, when on the fields south of Leipzig the combined armies of Prussia, Russia and Austria gathered to defeat Napoleon’s army in what was the biggest mass battle of the 19th century. From Katrin’s blog:

“There were over half a million soldiers fighting on those days, and one in five never made it home. The villages and the landscape were left in ruin, but the Battle of the Nations would prove to be decisive. A year later and the coalition forces invaded France. Napoleon was forced to abdicate, and though he would return to power, it proved to be only in order to suffer a final defeat at Waterloo and exile for the remainder of his life on St Helena.”

Now I was going to run through those villages and through that very landscape, but of course much has changed in the intervening couple of centuries and the main trace of the battle is the over-sized monument financed in the early years of the 20th century by Clemens Thieme and his “German Alliance of Patriots.” Over the summer I read Simon Winder’s interesting, if occasionally infuriating book Germania. Here’s what he has to say about the Leipzig monument:

“It is the work of Bruno Schmitz, the world’s worst architect, who unleashed his wretched talents on ruining several previously charming sites (the Kyffhäuser mountain, the point where the Rhine and Mosel join) and smoothing them in industrialized pseudo-mythology.”

As it happens, I have been to both the Kyffhäuser monument and the Kaiser Wilhelm Monument where the rivers meet, so this weekend I had the dubious honour of completing the Schmitz-set. I have to say, although I can see where Winder is coming from and it is inarguable that the Monument to the Battle of the Nations is preposterous, Schmitz’s work has a kind of strange fascination for me, not least because of the beautiful corners of the country that he unleashed his wretched talents upon.

In any case, we registered for the run, walked around the monument, and had a beer in its shadow before returning the following morning for the race. It was a lovely autumn day, cool and clear, and we ran south from the monument through those villages and fields that had once been laid to waste during the Battle of the Nations. According to the announcer at the start, there were runners from 27 nations in the 2000-strong field for the half marathon, but as always in such things most were engaged in their own private battles not with each other but with their feet, their legs, and their willpower.

It was a spectacularly pretty run surrounded by autumn colours, leading us south until we dropped the 6% gradient hill to the shore of the Markkleeberger See. Until 1999 this was a huge open-cast brown coal mine, a scar on the landscape bigger than any battlefield and a common sight in parts of the former German Democratic Republic where many of the apartments remained coal-heated until well after the Berlin Wall came down. In 1999 the authorities began the process of flooding the mine, and by 2006 the lake was in existence, and as we ran down the hill towards the beach and the promenade pathway it was a striking sight.

Of course, if you start and finish a half marathon in the same place then what goes down also has to come up, and after about a kilometre of running along the water’s edge we were faced with a steep hill back up. Thankfully, for a low-key race without many spectators on the course, the organisers had invited what appeared to be a manic local breakfast DJ and a bunch of cheerleaders to encourage us up the incline. Beneath his shouting we were driven on by the sound of the Stone Roses playing Fools Gold. Halfway up the hill I was convinced that if someone was a fool in this scene, it wasn’t necessarily the DJ…

At the top of the hill the monument came into view again, across the fields and the village rooftops. We were still ten kilometres from the finish but there is was, sticking out like a South African rugby player queueing for a fairground ride. Less than an hour later, after some lovely stretches through parkland, woods and alongside a couple more (much smaller) lakes and I reached the finish. In the shadow of Schmitz’s monument I once more drank a beer, this time with a medal around my neck and a loaf of bread under the arm. The loaf of bread was a gift from one of the race sponsors, and certainly one of the most useful goodies I have ever received for running for a couple of hours… anyone who has lived in Germany and returned home on a Sunday afternoon will know that finding supplies for the next morning’s lunchbox is not the easiest task in the world.

So I finished the weekend still both fascinated and repelled by the work of Mr Schmitz and his Monument to the Battle of the Nations. But the run across the formerly battle-scarred landscape to the old open-cast mine was beautiful, and a reminder that we can do many things to ourselves and this planet of ours and sometimes, just sometimes, we can make things better again. I am pretty sure I will be back again next year. 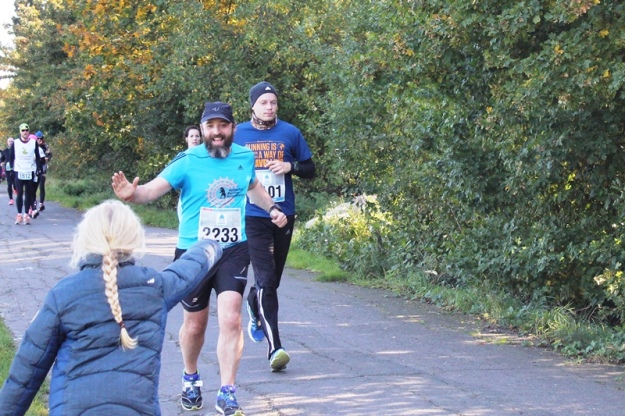 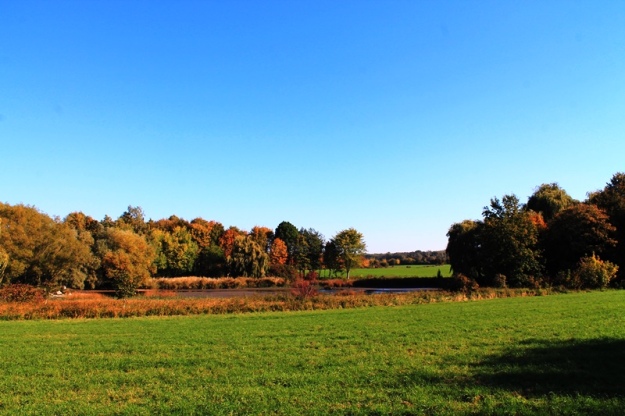