It has been a crazy month. It appears that launching Elsewhere, a new journal of place, even more than a blog about adventures beyond the front door, means you spend more time in front of a screen, behind piles of paper, or in climate-controlled storage facilities (that are at least a kind of Elsewhere because they could indeed be anywhere) than you do exploring the world around you. I am reading submissions based on places in Australia and Rwanda, the islands of Scotland and the two sides of Budapest, and it is all very inspiring if only we had the t…

No. There is no need for this. In my diary I have a note, scribbled every Monday. UaGS. It means don’t neglect the blog. Don’t forget the blog. But I have been neglecting and forgetting, and then I remember… adventures beyond the front door. That is how all this started in the first place. You can go to Rwanda and leave it all behind. You can go to the islands of Scotland. Or you can take a morning and, if you live where I live, you can go to Wittenau.

It was all Lotte’s idea. Wittenau is the final destination on the U8 underground line in Berlin that links the north and the south of the city as well as Lotte’s school and Katrin’s work with our home on Osloer Straße. Lotte’s desire was simple, and yet almost the perfect reasoning for some kind of psychogeographic ramble: it is the end of the line. No other reason is necessary. What is there? Shall we go and find out?

So we did, heading north from Osloer Straße until there was no underground line left and we were urged from the carriage by a disembodied voice that told us, in two languages, here, but no further. We emerged onto a crossroads that anyone who has spent any time in our city will be able to picture without having ever been there when I describe it as “very West Berlin”. Seventies apartment blocks sat atop shop fronts whose signage had not changed since the day they were built, a time when Wittenau was part of that island behind the Wall, that surrounded city. Banks and a laundrette. A steakhouse and a chemist. A bakery and a corner bar. Down the street we could see the Märkisches Viertel, a looming estate of high rises built to house the West Berliners cleared from the bomb-damaged tenements of, among other neighbourhoods, our home district of Weding and Gesundbrunnen. It was built hard up against the Wall, as if the boundary forced the buildings to the sky. When I first came to Berlin there were a bunch of German hip hop acts who used the stairwells and parking garages of the Märkisches Viertel for their videos. Girls, guns and VW Golfs. They no doubt wished the reputation was worse than it actually was.

We walked in the opposite direction, soon passing the last remaining farm and country houses from when this was all a long way from the city boundaries. It was an interesting mix of 18th century Prussian architecture and those 1970s social housing blocks. In between the gaps were filled with garden colonies and allotments. We found our way to the Steinbergpark, on the edge of an open expanse of protected wetland. Until Lotte found it on the map, I had never heard of this place, but it was lovely, a small but hilly landscape of trees and footpaths, a stream with a man-made waterfall stumbling down to a lake at the bottom. A bride and groom posed for pictures whilst the maid of honour did her best to stop the bride’s dress muddying on the footpath. The price of romance.

As the photographer tested their patience we hid behind a wall for our sandwiches, looking out across the still water of the lake (pond). A couple of cyclists passed by. A confused older gentleman asking for directions. But once the photographer had moved the wedding party on to the next location if felt like we were alone in the park. It was another reminder of what can be discovered if you just go and look. On the way home we traced fingers over the U-Bahn map, from the end of one line to another, in search of the next adventure.

The first issue of my new project Elsewhere: A Journal of Place is out now 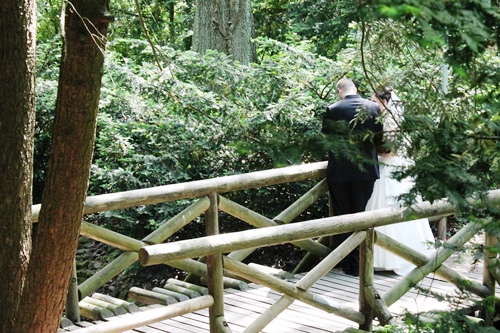