In Las Vegas, European cities are recreated as mega casinos. In Dubai, the canals of Venice are reimagined as a shopping mall with a view of the Persian Gulf. And in Potsdam, in northern Germany, there are a couple of streets that would make you think you were a few hundred kilometres to the west, in the neighbouring country of the Netherlands.

As with the more modern examples in the deserts of Nevada and the Arabian peninsula, the Dutch Quarter of Potsdam was built on the whim of someone with enough wealth to shape his city any way he chose. That man was Friedrich Wilhelm I, soldier king in Prussia who, as well as resettling the lands to the east following devastating plagues and establishing primary schools in his domain, also wanted to shape Potsdam. Unfortunately there was a distinct lack of qualified craftsmen in Brandenburg, and so he looked to his neighbours for help.

In order that the Dutchmen he invited to Potsdam should feel at home in the city, he built 134 brick houses between 1733 and 1740 under the guidance of Dutch master builder Johann Baumann. As it happened, most of the houses were eventually occupied by French or Prussian merchants and artists as the Dutch did not arrive in the numbers Friedrich Wilhelm had anticipated.

But there was an added bonus to these Dutch-style houses that the King was to make very good use of. Dutch houses tend to be thin, but quite tall, with high ceilings. Around this time the Soldier King had created a new elite guards known as the “Potsdam Giants”, all of whom were over six foot tall. The third floor of each of the Dutch Quarter houses was reserved for those guards, and every homeowner was required to make it available to them.

Now it is a neighbourhood of bars and cafes, artists studios and artisan shops. But every entryway also leads to a steep and narrow staircase to the living quarters above, and the number of doorbells outside each door suggest that this is a neighbourhood that – despite its obvious attractions for tourists – is very much lived in. We saw no clues, however, of any giants still living on the third floor. 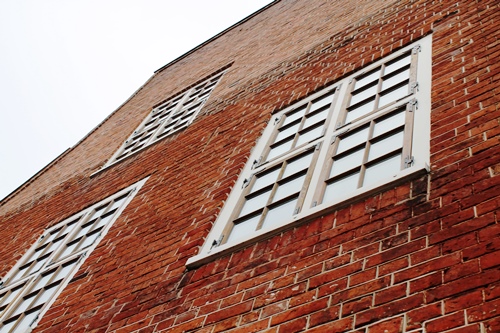 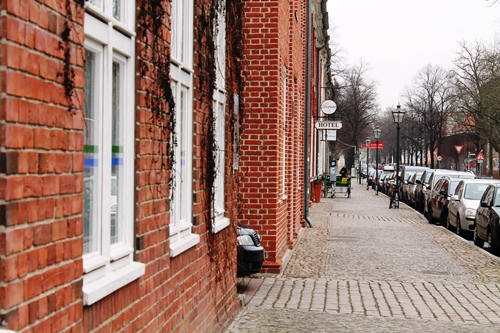 1 thought on “The Dutch Quarter, Potsdam”